Lagos Postcard: When EU Pushes Migrants To Go Back Home

Nigerian painter Isaac sold everything and left Lagos, in the hope to make it to Germany. After barely surviving in Libya, he gave up and went back.

LAGOS — In the midst of a heavy night, in the spotlight of the cargo airport of Lagos, a Nigerian politician gives a blazing speech. "You should be grateful," she says to the 160 migrants who have just gotten off a Libyan plane. "Some of you came back with only one leg. Others with only one eye. But you have everything you need to live with God's help. Never forget: Hope comes on quiet feet."

Isaac is sitting on the edge of the hangar and is too tired to tune into this quiet hope. He is lean, about 15 kilograms lighter than before leaving Nigeria for Europe last year. In the morning, before boarding the plane back to his home-country, the 29-year-old was in the Libyan port town of Zuwarah, void of any illusion. Then came the return flight with the help of the International Organization for Migration (IOM) — over the route that almost killed him 14 months earlier overland. Too much to tune into an ode to life.

Isaac silently eats cold rice and chicken. Next to some firetrucks there are tables on which he has become official again: registration, a medical check, a telephone number to get in touch with the IOM for any further help, an envelope with 40,000 Naira (95 euros) for the first few days. Employees of a cellphone service provider give out a simple phone with a little credit. All the ingredients for a new beginning.

The European Union encourages those who want to return to their homeland. And Nigerians represent one of the most important target groups. In 2017, when the majority of migrants and asylum seekers still arrived in Italy, Nigeria had the largest share (16%), with 5,532 registered individuals. The overall protection rate is low: in Germany less than one Nigerian out of six is granted asylum.

In addition to the free return trip, the EU-funded IOM program promises "further support to fund start-ups, study and medical bills" for the most vulnerable. Even Nigerian President Muhammadu Buhari has stepped in. "You should stay here and look for ways to move our economy forward rather than risking your life," he has said.

The IOM repatriated around 9,000 Nigerians from Libya over the past 18 months. Another 1,000 returned thanks to funds from the Nigerian government. There are also more returnees from Europe. In 2017, some 154 volunteer returnees came from Germany, which also forced some 110 deportations to Nigeria.

This topic has no meaning in Nigeria for the current election campaign. Migration has always been considered normal, at least until reports of torture in Libya became public. Some 20 million Nigerians live abroad, one tenth of the entire population. The majority of them are legal migrants, and their remittances make up about five percent of the GDP.

In Lagos, Isaac had overcome poverty working as a painter, and had been quite successful: he had a lot of work, could afford to buy a a car and a laptop. Then he saw pictures of German color mixing machines. "Go, save a little and bring those machines back to Nigeria," he thought to himself. He sold everything he owned to finance his journey.

He's not sure whether things feel right.

But he played the wrong card. His story resembles that of innumerable victims of illegal migration in Africa. He was deceived by smugglers, who constantly demanded new payments. He was abducted and condemned to forced labor in Libya, imprisoned by militias, until his dream of Europe vanished and was replaced by the hope of mere survival.

But upon landing at the airport, he is not sure whether things feel right. He does not even have a bag. Back home, it's not survival of the fittest but of the richest.

Would he be willing to be accompanied by us for a few days? "Yes, everyone should hear my story." It's midnight, and buses are ready to take the migrants to the Lagos Airport Hotel: 154 are men, there are only six women. Isaac shares the room with another man. The following morning they go separate ways. The majority is driven to Benin City, in southern Nigeria.

Isaac wants to stay in Lagos, a rapidly growing city of 20 million inhabitants, which became a symbol of prosperity for many Nigerians long before Europe. In the 1970s, the oil boom attracted millions, a complete rural exodus.

The next morning, migrants say that the preacher Temitope Balogun Joshua — proclaimed the third-richest preacher in Nigeria by Forbes magazine — has invited them.

Isaac gets going. From the bus, he calls his brother Emmanuel, who became the head of the family after the death of their parents. "Emmanuel, it's me, Isaac", he says in a croaky voice, as if he had caught the flu. The voice answers: "My brother Isaac is dead. Who are you?" "It's really me," says Isaac. "But that's not your voice."

The last Emmanuel had heard of Isaac was when he had phoned his kidnappers in Libya who had said they would kill his brother because Emmanuel could only transfer only $200 to Libya instead of the required $300. He had heard them give him electric shocks. After that he could no longer reach Isaac. He mourned him for months. "I'll visit you," Isaac says.

But first comes the blessing. The bus stops in front of Joshua's church, which with 15,000 seats exceeds the capacity of many soccer stadiums. Joshua claims to be able to use his prayers to heal HIV and cancer, as well as to save believers from exorcisms. In 2014, when a church collapsed, killing 110 people, Joshua blamed a mysterious flying object. The trial is ongoing.

The gold-decorated church is located on the edge of a poor neighborhood. "We see it as our duty to provide for the neediest," says a Briton who introduces herself as a colleague of the prophet, "and of course the returnees are part of it."

In a lobby, Isaac and around 80 other returnees sit on plastic chairs in two long rows. A nurse takes their blood pressure, filmed by two fully equipped camera teams of the church.

An American gives the sermon. In the end, everyone gets two bags of rice and the equivalent of 100 euros. Minutes of rejoicing are immortalized by the cameras. The migrants are all wearing the same tracksuit they got from the IOM the day before in Libya — they barely have anything of their own. Any help is welcome.

Then Isaac makes his way to the traffic. The destination of the trip, it turns out, is an orphanage. "They need the rice more urgently," says Isaac. Other migrants are also donating bags. As rough as this city may be, you will notice many people helping each other. With difficulty, Isaac pulls the bags from the trunk. Then he asks for two days of rest. He must sleep and gather his thoughts.

After the weekend, Isaac sits in the living room at a relative's home. His room consists of a mattress, a Bible, two pairs of pants and two shirts. He paid nearly 50 euros for a smartphone. He wants to work as a painter again, and he used WhatsApp and Facebook to be in touch with customers.

"I have learned what I have in Nigeria," he says. "Now I can move around freely, talk to people, listen to music." For the first time, he eats the spicy national dish: "Oh man, I've missed jollof rice." Then he calls the IOM phone number he got at the airport. 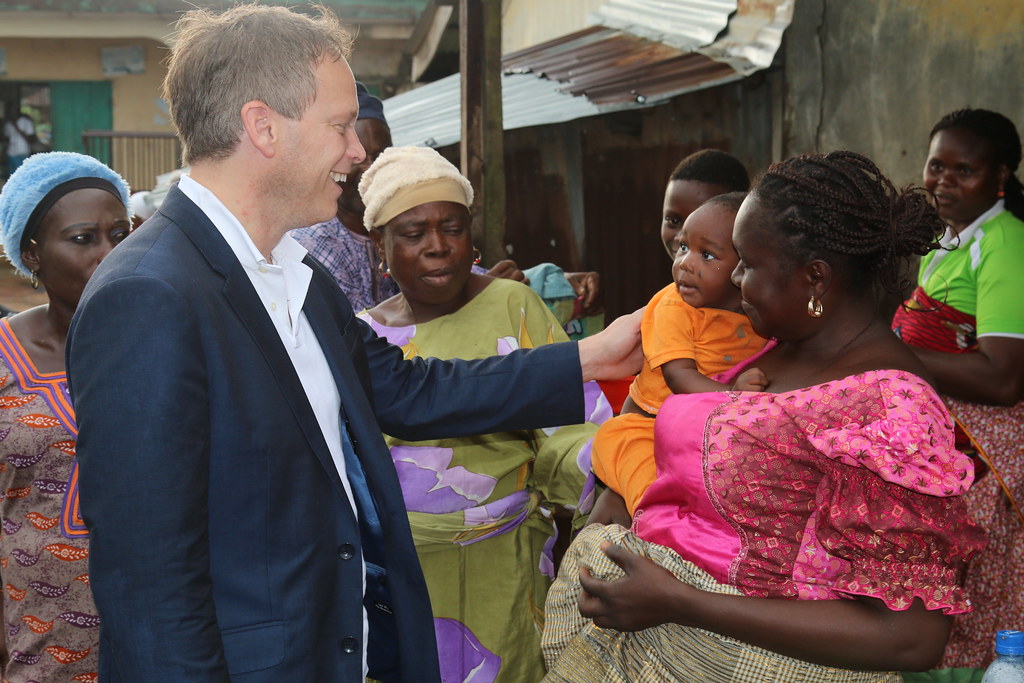 Some become electricians, others hairdressers, others to school. In the coming weeks, a pineapple company in Benin City is scheduled to go hire 20 migrants. But the programs are still in their infancy stage. An estimated 10 to 20% of returnees will try to leave again.

Again and again Isaac dials the number. "We'll call back," the IOM says. Isaac hangs up. "I have to be patient. You have to be patient about everything the government is involved in." Nigeria is only marginally involved in financing integration efforts. Citizens' trust in the authorities is lower than in any other country on the continent.

Isaac sets off in the pouring rain and runs across the Ladipo Market.He finally meets his brother Emmanuel. Between VW buses, the two men fall into each other's arms. "You're alive," cries the brother. "I survived," says Isaac.

Emmanuel offers him a job, starting immediately. But Isaac refuses. He earned more as a painter, and is in contact with old customers. He hopes the IOM will help with the purchase of paint stirrers.

The next morning, Isaac dials back the IOM number. Again, he is asked for patience, and about his kidnappers. "I can wait, but these criminals must be reported now," Isaac is angry. He has the bank account number to which he had to transfer part of the money. And he knows the address. "I have to go to the police."

But at the nearest police station, the officer hardly looks up from his paperwork. Isaac has to go to the state headquarters, a two-hour drive away. There, someone waves Isaac to his desk, lets him explain what happened, but takes no notes.

"Where is the perpetrator?"

"Then we can't do anything about it."

"But his wife is here. I have the bank details."

"Where exactly is she?"

"Then you need to go to the local police."

Imo state is 600 kilometers away. Two weeks after his return from Libya, Isaac gets on the bus to Imo. Somebody asked him to come work on a construction site. On his day off, he goes to the police. "We can't do anything here," they say there as well.

Isaac gives up. Shortly before this article's publication, he sends us a message via WhatsApp: "Let the past be the past,I'm thinking about the future now." He has some gigs lined up as a painter, and newfound confidence.

When Lesotho recently discovered its first coronavirus case, it marked the arrival of the ...

Holidays are over, and it's back to school. Frightening or fun, this week marks the beginning of ...