Can A Libyan Warlord Help Europe Solve The Migrant Crisis?

Hundreds of thousands of refugees want to reach Europe via Libya, constituting a billion dollar trade option for smugglers. But a local warlord, armed with only one boat and plenty of opaque motives, has declared war on the trafficking gangs.

ZAWIJA — It's been 10 days since we've joined the patrol along the coast with Commander Al Bija of the Libyan Coast Guard. Our 16-meter-long vessel is cruising along the most dangerous border in the world.

According to the German government figures, nearly one million refugees and migrants are currently in Libya, which has become the gateway country-of-choice for people seeking to reach Europe by sea.

The dangers mentioned are not hard to see: in fact, we have been shot at with automatic weapons by smugglers, trying to protect their "human merchandise" from being rescued by the Libyan Coast Guard when they are in trouble out at sea.

The European Union believes it can stop the flow of refugees from entering by being more active in Libya. At an EU summit in Malta in February, European leaders called on the Libyan Coast Guard to close off the seas, intercept the refugees and take them to reception camps in Libya. But the reality is that the Libyan Coast Guard, in waters west of the capital of Tripoli, where many of the human traffickers have their bases, consists of exactly one single boat and 37 crew members.

Their commanding officer, Commander Al Bija, also happens to be a feared warlord. At the age of 30, Al Bija is a hero to some, a criminal to others — and to some, even a murderer. But he is also the only chance for Europe to foil the human traffickers' work in Libya, an increasingly unstable country without a central government, army or police.

"No one can pass us unseen," says Al Bija in his headquarters in Zawija, west of Tripoli, a few days before we came under fire at sea. "We are the only functioning Coast Guard in western Libya."

Al Bija has been working the coastal region with the patrol trawler, called Tileel, a few rubber dinghies and his modest group for two years. "Our mission," he says, "is to rescue refugees from distress at sea, find human traffickers and, if necessary, kill them."

The crew has taken more than 37,000 people from the Mediterranean back to Libya since August, 2015, says the Libyan Defense Ministry.

The EU decided to train the Libyan Coast Guard in armed border patrols, as well as techniques for dealing with refugees on land, in order to try to end the nefarious business of the traffickers. Brussels provided 200 million euros to the efforts, a commitment matched by the Italian government during the first phase of the plan.

"We do not need to be trained, we know how to navigate, fight and kill," Al Bija responds. "(But) if we are going to do Europe's dirty work then Europe will have to pay us with a boat that can hold up to 1,000 people, speed boats, spare parts, fuel and wages."

But is he really one of the good guys? Or perhaps he's a double agent?

"I know the right people," says the Commander

In any case, Europe does not have much choice other than to trust Al Bija. Six years since the fall of Muammar al-Gaddafi there is very little hope that Libya will become a democracy. The people's brigades that rose in rebellion against the dictator have formed into plundering militias, occupying old ministry buildings. The government, on which Europe's hopes rest, barely exercises any control over Libya. The Prime Minister, appointed by the UN, has not been recognized by the Libyan parliament. Meanwhile, the so-called Islamic State (ISIS) has conquered several cities. Circa 1,700 rival militias fight each other and are in active control of cities, petroleum refineries, oil fields and the million-dollar trade in humans wanting to cross the Mediterranean to Europe.

It would take hundreds of very well trained men to rid the coast of traffickers, says Al Bija. But who should choose them? The weak government? The EU? "Me. I know the right people," says the Commander.

A former student at the Naval Academy in Tripoli had to give up his studies in 2011 due to the revolution. He has been severely wounded several times while fighting Gaddafi's troops as a rebel and was flown to Germany to be treated for his wounds. After returning to Libya to fight for his "mother, father, family, clan, tribe", in the summer of 2015 Al Bija, his nom de guerre, and his fellow revolutionaries decided to do "something great" and take the harbor of Zawija from a rival militia. They were successful. Once in control, they renovated the headquarters and fixed up the patrol boat, designed their own coat of arms, assigned military ranks, gave themselves the name "the Libyan Coast Guard of Zawija" — and started to patrol the Mediterranean.

Their enemy: human traffickers. These are assumed to be organized into several groups around one large network along the Libyan coast. Traffickers hold captive refugees and migrants who cannot afford the journey across the Mediterranean immediately, beat them, rape them, torture and murder them in private prisons. An internal report of the German embassy in Niger recently spoke of "concentration camp-like conditions."

But why does Al Bija risk his life? "I have a good heart. Should I let my brothers drown in the sea?" But he also says that the "clans [of traffickers] earn millions, buy modern weapons, bulletproof vehicles, tanks. They will control or displace or kill us if we do not attack their business."

And it is in this opaque world of warlords, militias and organized human trafficking that Europe must face down, imposing its "border management" to stop the migration to Europe. But is a warlord like Al Bija really the right partner for such an enterprise? He forcefully took control of a large territory that was not under state control any longer. His power is not based on political legitimization but his troop's firepower.

Gray areas abound along this coast. Italian journalist Nancy Porsia, an expert on emigration out of North Africa, says she is sure that "the Coast Guard of the Libyan Navy is involved in human trafficking." Colonel Tarek Shanboor of the Ministry of the Interior in Tripoli, adds: "we do have traffickers in our midst, which is a real problem."

Al Bija calls these reports "lies… spread by traffickers." He and his men take the refugees and migrants that they apprehend at sea to special camps of the UN-solicited government. We visited one of these camps, the Surman women's camp, and saw the misery reigning there with our own eyes. When the militia guards left the hall for a few moments one of the women appealed to us, saying that they were repeatedly raped, showed us her bloodstained clothing and begged us to help them. But there was nothing we could do. The guard returning commented on how happy the women are to be in the camp, but that Europe would have to start paying for their upkeep, for mobile toilets and showers, tampons, pampers.

In the face of this reality, we could see that the more Africans were herded together in these camps and the worse the condition, the stronger the basis of negotiation for the militias with Europe was.

How the EU will respond is still unclear

The Libyan government is operating 24 internment camps for migrants, according to the United Nations. Europe wants to utilize the already existing infrastructure to turn these camps into humane reception camps and close down those that are intolerable. How exactly the EU is planning to force the militias to abandon their camps is unclear.

"They leave us here to rot," says a man we see inside a cell cramped with other prisoners in Annasser Camp in Zawija. 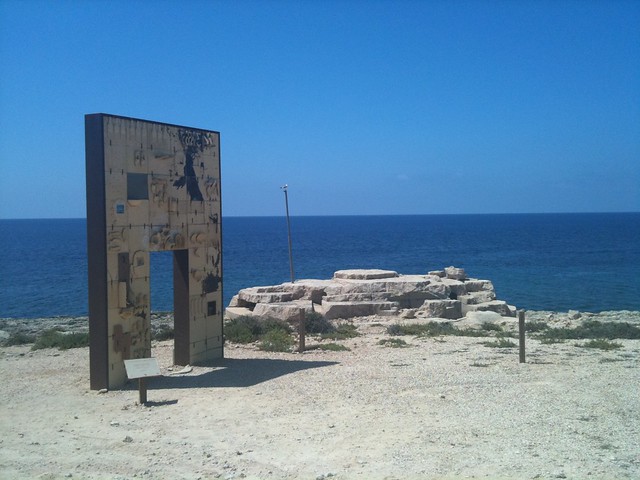 The "Door to Europe" on the Italian island of Lampedusa — Photo: Carlo Alfredo Clerici

Although the fee is payable prior to departure, traffickers are not happy if the police boats intercept their "freight." Those captured, once they're released, will warn others of their traffickers.

In Libya, where everything is a fight for mere survival, no one puts their cards on the table willingly. Until the very end we were not sure who Al Baji really was. The man who was wounded as a rebel, recuperated in Germany, but returned to Libya to fight for his family, his clan and his tribe with a captured boat and a handful of men to conquer the coastal regions of Libya. One thing, however, is certain. He has managed to carve out a place for himself in war-torn Libya to make a profit from rescuing refugees. When asked how he actually makes his money he says that they seize "illegal Egyptian and Tunisian fishing vessels and keep them until the owners can pay the fine." But he adds that he, and all of his men, have normal professions although they spend 300 days a year on sea. He adds, for example, that he is also a horse breeder.

It seems from this vantage point that the most important pillars on which the EU deal with Libya rests are crumbling already. The Coast Guard is littered with dubious staff and the "secure reception camps" are nothing more than warehouses, occupied by militias and used to house helpless people who are nothing more than a resource in the war for Libya and the millions of euros that Europe is willing to pay.

"There are no fast and easy solutions," says Martin Kobler, German Special Envoy to the United Nations for Libya. If that were the case, many would remain in the oil-rich nation and work, just like in Gaddafi's days, instead of taking to the boats. And the human traffickers would be short of freight to ferry across the Mediterranean.

BENGHAZI — They call it the "Café of the Displaced," and it's always full. "It's because my ...

SIRTE — If it were theater, it would be bad theater. Too incongruous, too unreal. The stage ...