Authorities have decided to start cracking down on popular web programs featuring pretty vloggers with seemingly limitless stomachs. But are they really such a bad influence?

BEIJING — They're mostly women — young, pretty and slim. But their popularity has everything to do with their stomachs, and what they're willing and able to stuff into them.

Eating shows made by vloggers are all the rage in China. Some of these stars are known as "big stomach kings," and in addition to uploading videos of themselves eating huge amounts of food, they also sell goods through their live streaming platforms. One young woman, known as Daweixian, has nearly 40 million fans and earns 600,000 yuan (nearly $80,000) per video on adverts.

But while the public's appetite for such antics knows no bounds, Chinese authorities appear suddenly to have had their fill, and are now pushing back against the vloggers.

In comments made on Aug. 12, CCTV, China's state-controlled television agency, criticized these eating show vloggers as "misleading consumption habits and causing serious waste." The network renewed its attacks later in the month, accusing these "malformed" web shows of promoting "stuffing oneself with rubbish and whopping amounts of food just to attract traffic."

Since then, video postings of binge eating have been put under strict oversight and censorship by China's central internet regulator, the Cyberspace Administration.

The timing of the crackdown is no coincidence. It comes amid a more general push by the Chinese government for a more modest approach to food consumption, and in early August, authorities launched a campaign called "N-1 meal ordering mode." The "N" represents the number of people dining, and "-1" means ordering one less dish.

That kind of restraint, needless to say, is not what the hyper-popular, binge-eating shows are all about. The idea originated in Japan, where an attractive young woman named Yuka Kinoshita made a name for herself, starting in 2014, by participating in eating competitions. She soon earned celebrity status, prompting South Korean YouTubers to make their own version. Later, Chinese copycats followed the trend as well.

These livestreaming programs, in turn, opened up opportunities for vloggers to double as food sales representatives, and to use their shows as marketing launchpads. The popularity of the model attracted caused the number of such vloggers to multiply in recent years, and to compete for subscribers, they also eat more and more, from fatty meats to lobster, octopus or steak … you name it.

For every action, however, there is a reaction, and as the gluttony became more and more exaggerated, the Chinese state finally decided to intervene. So far, the public seems to be relatively supportive of the government's measure.

Many people share the opinion that such celebrity binge eaters are to blame for the country's overall food waste and unhealthy eating habits. The shows have also generated controversy over allegations that some of the over-eating may be faked.

They're an easy scapegoat in other words. But will boycotting these binge eating influencers really make a difference in reducing China's food consumption? Probably not.

For one thing, half of the food consumed in China is used for animal fodder. Catering represents another quarter. And so to really reduce food consumption, the goal should be to improve efficiency in those two sectors.

According to a study on food in Chinese cities, China's catering industry wastes on average 93 grams of food per meal per capita — a wastage rate of 11.7 %. For large-scale gatherings it can be far higher still (38%). Likewise for student catering (canteen or boxed lunch), where the wastage rate can also be above 30%.

Most food waste, in other words, doesn't come from individual gluttony, but from the social custom of throwing lavish banquets, including the free, taxpayer-funded meals that government officials enjoy. Also, school canteens are often involved in collusion with businessmen. In addition, there are objective technical problems such as inaccurate quantity control in mass production in the alimentary industry. 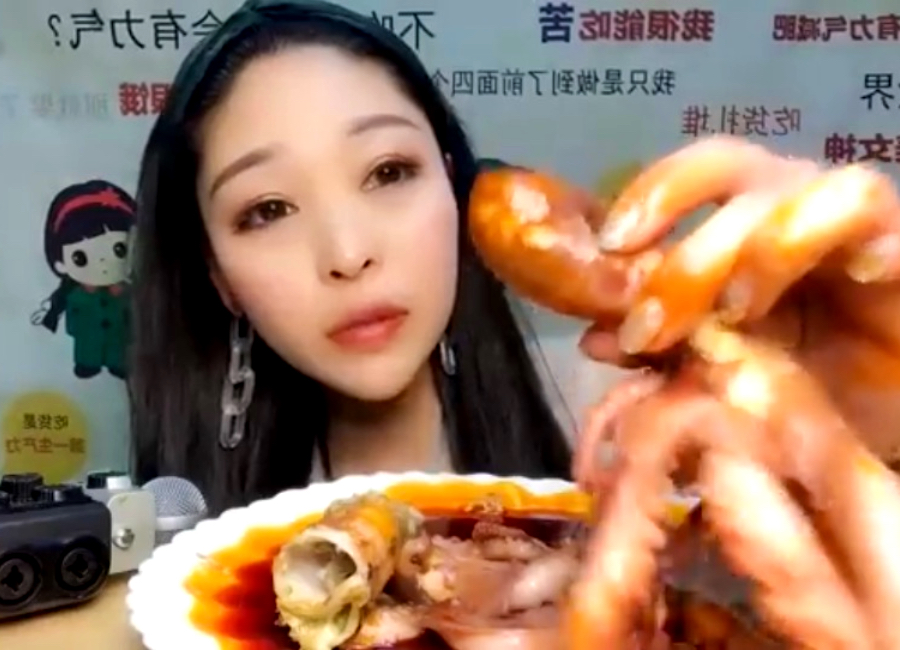 Blaming the problem on individuals, or on voracious vloggers, is therefore a political choice rather than one that's based on real economics. Geopolitics may play a role as well, given how uncomfortably dependent China is on grain, soybean and corn imports from the United States.

And because it's impossible, in the short-term, to improve industrial efficiency or lower the lower the level of food output, the Chinese government is hoping to make certain preparations by guiding and changing the public's consumption structure.

I eat for them and do what they dare not do.

Appearance is obviously an important factor that they attract followers. But it's also part of the illusion such shows create — that these women can overeat without ever putting on weight. That's where the faking comes in: Videos are edited so that the audience doesn't see when the vloggers spit out what they had been chewing, or when they force themselves to vomit or take medication to provoke diarrhea before the food is digested.

Those kind of deceptive tactics are finally coming to light, and viewership has dropped as a result. There are also obvious risks for the vloggers themselves, and in one case, a 30-year-old man from the northeastern city of Shenyang suddenly died while his show was being aired.

But even when the tricks of the over-eating trade aren't exposed, most people have enough common sense to know that binge-eating junk food will lead to weight gain. And that too is part of the appeal of such shows: It's a way for people who are actually careful about their weight and what they eat to live vicariously.

In China, Japan and South Korea, where collectivism is strong, discrimination against overweight people exists in all aspects. People exercise restraint, therefore. But they can also fantasize about giving into their urges, and that, perhaps, is the real appeal of such vlogger shows. They satisfy that natural craving for overeating on high-fat, high-sugar and high-oil foods, but without the calories or extra pounds.

As Duoyi, one of China's most popular binge-eating female celebrities, explains: "Many people care about their figure. They crave food but don't dare eat too much. I eat for them and do what they dare not do."

The irony, therefore, may be that what binge eating celebrities really trigger isn't gluttony, as the government claims, but the opposite. They offer a kind of guilt-free, psychological release. And for that reason — and despite the government crackdown — they're unlikely to really disappear.

A few weeks after the government pulled the plug on the most popular websites, several medium and small-sized eating shows have already made their comeback, sometimes by changing their names. The other difference now is that they all stick a poster in the background during people to "Reject waste!"