Secrets Of A Courbet "Ghost" Landscape In Switzerland

Last year, an unknown painting by the famous French artist was left to a small Swiss canton. Months of investigation were needed to uncover the canvas's mysterious elements, but some questions remain.

DELÉMONT — Last autumn a painting appeared out of the blue, or rather by mail, with a simple letter addressed to the culture office of the canton of Jura in northwestern Switzerland. The letter said that Hugo Saemann, of Delémont, who had died a year earlier in Zurich, had left the canton a painting, Landscape in the Jura. A green oil on canvas signed by a certain Gustave Courbet.

"A Courbet in the canton, this was a first!" recalled Christine Salvadé, head of the culture office, still amazed a year later.

But the exciting surprise was followed by incomprehension: This particular Landscape in the Jura was a so-called "ghost painting," not in the artist's catalogue raisonné nor any of his monographs. The work appears never to have been indexed or exhibited. "It's a rare event in a painter's historiography," says Niklaus Manuel Güdel, an art historian from the region, to whom the canton entrusted the mission of clarifying the situation and determining whether the inheritance could be accepted. So began a long and thrilling investigation of nearly a year.

Güdel began by contacting all the specialists he knew, but none could shed light on the mysterious painting; the art historian feared it might be a fake.

The man for the job was Klaus Herding, a German expert in Courbet's work, known for having examined almost 80 of the famous French artist's paintings. But to decide on the Jura canvas, he had to see it with his own eyes. So one January morning, Güdel drove to Frankfurt, a large parcel in his trunk. "It was early, it was still dark and it rained.... It was like a scene from a spy movie."

From the moment he held the painting in his hands, Herding was surprised by its intensity. "It's an extremely animated painting. There are at least nine variations of green that, on their own, demonstrate a moving and impulsive nature." 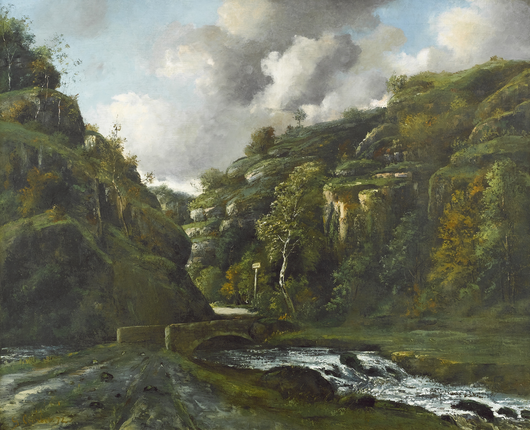 After the initial thrill came the stylistic analysis: Does the painting bear Courbet's mark? His signature seemed authentic, and Herding recognized the earthy colors that were so dear to the artist. In the foreground the expert observed a patch of road, obviously hastily painted. Not surprising to Herding, who believes that Courbet, up to his neck in debt at the end of his life, would have hurried to finish the painting in order to sell it.

After a few hours of inspection, Herding's conclusions were unequivocal: It is definitely a Courbet, most likely started in 1864 and completed eight years later.

The painting is authentic, yes, but what about its provenance? What hands did it go through? This is not an anecdotal consideration in a time when looted art is making news, with the 2013 Gurlitt affair, in which hundreds of artworks confiscated by the Nazis were found in Germany in the possession of Cornelius Gurlitt, the son of a Nazi-era art collector, or the recent decision in La Chaux-de-Fonds, Switzerland, to part with a painting by John Constable, seized by the Vichy regime in 1942.

The place and the date were enough to ring all the alarm bells.

"Today, we can no longer accept a work, ethically or legally, without preliminary research," said Marc-André Renold, director of the University of Geneva Art-Law Center. To verify the legality of the acquisition, the specialized lawyer dove into the work's past. "These paintings without a history can unfortunately reveal to be cases of abuse or stolen objects."

And the itinerary of Landscape in the Jura did raise some concern. According to Béatrice Saemann, the sister-in-law of the deceased, the painting was given to Hugo Saemann by his employer when he was working in Germany in 1939. "The place and the date were enough to ring all the alarm bells: I knew we would have to dig deeper," Renold said.

Renold and his team searched databases of art dispossessed by the Nazis, but the Courbet was nowhere to be found. An infrared analysis of the painting, carried out in May, revealed traces of the artist's characteristic pallette knife, still engraved under the varnish, but no label attesting to any place of passage.

"The family had the painting reinforced on a new canvas in the 1980s, so any potential customs stamps disappeared with the original frame," explained Güdel, who also frantically pursued the investigation. "I was no longer sleeping at night," he said. The historian dedicated his Christmas vacation to examining different possible scenarios, with the hypothesis that the painting was given to Saemann as a gift by the Von Roll foundry in the Jura when Saemann became its director.

Our little canton can be a model for how to conduct an investigation.

After many months of fastidious research, and though the painting's itinerary remains unclear, the lawyers ruled out a fraudulent past. "If one day someone comes out of the woods and reclaims the painting, the canton will be able to say that it acquired the painting entirely in good faith," said Renold.

With this ultimate green light, the gift was accepted last August. Landscape in the Jura, estimated at 300,000 Swiss francs (about $305,400), joined the permanent collection of the canton's museum of art and history where it will be on exhibit until the end of the year. "This work is a magnificent gift for the region," rejoiced Ms. Salvadé. "It is also shows that our little canton can be a model for how to conduct an investigation."

One question still captivates the public: In which corner of the Jura did the famous painter set up his easel?

"Courbet's landscapes are generally objective representations of specific places," notes Marco Jalla, art history assistant at the University of Geneva and a specialist in artistic geography. "In Switzerland, Courbet painted sites liked at the time by tourists and Swiss buyers: the Chillon Castle [an island castle on Lake Geneva] or the Grotto of the Giants, near Saillon, very popular in the 19th century."

At the end of August, Salvadé challenged art lovers on Facebook to find the exact placement of the little stone bridge. Since then, speculation has been rife: between Vermes and Envelier? In La Roche Saint-Jean? In Ornans, a commune in the French Jura where Courbet was born? "People went there, searching, some even sent us points on Google Maps," Salvadé said, smiling. "Inhabitants of the Jura really took ownership of this painting!"

The most plausible hypothesis, made by a pensioner in Delémont, is that the painting was done in Gorges du Pichoux, in the Haute-Sorne municipality. But Güdel is skeptical. "The outline of the waterway doesn't fit. And we don't have any proof that Courbet ventured that far." The historian is currently exploring a new "serious trail."

Salvadé has promised the best detective a bottle of Damassine, a damson plum liqueur, on Nov. 11, Saint Martin's Day. Until then, all bets and eyes are wide open.