It was autumn, 1939. Germany had just invaded Poland. France had not yet fallen. Mussolini was Hitler's ally on paper, but had not yet mobilized troops. And the United States wouldn't enter the war for another two years.

Exactly 80 years ago this week, the Mazzini Society was born in Northampton, Massachusetts, allowing intellectual émigrés to dream up a liberal, Italian republic in the Land of the Free — far from the grasp of Benito Mussolini.

Some of the group's members had rebuilt bridges after the ravages of World War I. Others wrote books on Paul Cézanne and Frank Lloyd Wright. Still more were socialists who had initially supported Mussolini before things went too far. All sought to free their mother country from dictatorship.

I. The Expatriates
"And what do you want to put on it, if not Mazzini's image? A naked woman? Enough with the arguments, then!"

With his signature sense of humor, the 66-year-old medieval history professor Gaetano Salvemini put an end to all the squabbling.

For days, "the expatriates" — as Mussolini contemptuously christened Italy's anti-fascist exiles — had been exchanging fiery letters from one corner of the United States to another, debating whether the best logo for their newly formed association would be an effigy of a turreted Italy; an image of Giuseppe Garibaldi, the beloved 19th-century general who helped unify Italy, or the face of Giuseppe Mazzini, who in 1830 founded the "Young Italy" movement with the goal of throwing off the yoke of the Austrian empire and creating a republic.

The Society had no shortage of opponents.

The exiles included art historian Lionello Venturi, who taught in Baltimore after being one of twelve professors to refuse to swear an oath of fealty to fascism at the University of Rome, as well as Giuseppe Antonio Borgese, a novelist and critic fond of German literature and aesthetics, who'd fled to Chicago from Florence after a tip off that Mussolini, known as "Il Duce," was not very fond of him.

Under Salvemini's wise judgment (and biting wit), the group of learned and quarrelsome professors finally came to a decision. And so, on September 24, 1939, these stateside scholars, together with a group of intellectuals and politicians belonging to the Paris-based anti-fascist resistance organization "Justice and Liberty," created the Mazzini Society.

II. The Society
Salvemini — who had become famous in Italy for calling out the corruption of a suspiciously long-serving prime minister with the quip Ministro della Malavita, or "Minister of the Underworld" — wanted the name "Mazzini Society" to be in English: It was an homage to the country that had generously welcomed Mussolini's opponents.

The Society, with its newspaper Mazzini News, wasn't just a way for Italian anti-fascists to pressure the American government to take up their cause — it was also an extraordinary fount of liberal and republican ideas.

It represented a political and cultural heritage that Italian émigrés brought back to "the Boot" at the end of the war, and became a source of funding for countless former exiles: Salvemini in his collaboration with the political, economic and cultural weekly Il Mondo, created in 1949 (and eventually folded into the Corriere della Sera daily); activist and author Nicola Chiaromonte when he founded the art and politics monthly Tempo Presente in 1956, and philosophy and law professor Max Ascoli, who in 1949 launched The Reporter, a liberal biweekly that merged with Harper's Magazine in 1968.

III. How It All Began
The fate of "expatriate" Salvemini was sealed from the moment he began publishing the clandestine newspaper Non Mollare, ("Don't Give Up,") in Florence with his younger activist friends Ernesto Rossi, Carlo Rosselli and Nello Rosselli. Appearing at irregular intervals (and wryly emblazoned with phrases such as, "Comes out when it can!" and "Whosoever receives it is morally obligated to pass it around!"), the newspaper published 22 issues between January and October 1925 before Salvemini was arrested by fascist police. Following a grant of amnesty by "Il Duce," the professor fled to France and England before landing at Harvard University, where the idea of the Mazzini Society first took root.

One of the Society's first members was Max Ascoli, from the Northern Italian city of Ferrara. With his launch of The Reporter in 1949, Ascoli became a point of reference for figures such as economist John Kenneth Galbraith, future U.S. Secretary of State Henry Kissinger, and Arthur Schlesinger, Jr., the scholar who penned President John F. Kennedy's "New Frontier" speeches.

In 1941, another champion of liberal and socialist thought showed up at the Mazzini Society's headquarters: Nicola Chiaromonte, who had close ties to Hannah Arendt, Albert Camus and George Orwell. After fighting in the Spanish Civil War on the communist side — flying planes alongside André Malraux — Chiaromonte felt like an exile upon his return to Italy; he was hostile to the compromises that he felt tied intellectuals to political parties after the War. With his monthly Tempo Presente, he fought for a cultural "third way" between clericalism and the authoritarianism of the left, publishing pieces by the likes of Lorenzo Milani, the Roman Catholic priest and teacher who advanced the plight of poor children, advocated conscientious objection to fascism, and was a staunch believer in the separation of church and state.

In 1940, Count Carlo Sforza, the future foreign minister of Italy, arrived in the United States. With strong support from the Society, he penned a letter to General Edwin Watson, the senior aide and military adviser to President Roosevelt, seeking the creation of a voluntary legion of Italians under the orders of Randolfo Pacciardi, who had been head of the anti-fascist International Brigade during the Spanish Civil War.

But perhaps the most famous member of the Mazzini Society was the legendary music conductor Arturo Toscanini, who was a household name in the U.S. by early 1937, thanks to his role as music director of the NBC Symphony Orchestra.

In Bologna in 1931, the maestro had refused to perform the fascist hymn "Giovinezza" in the presence of Leandro Arpinati and other party bigwigs. That act of resistance earned him slaps and punches from the followers of "Il Duce." In America, it made him the shining star of the Mazzini Society.

The association also had a women's division. Its members included Amelia Pincherle Rosselli, the mother of Carlo and Nello Rosselli, who had helped Salvemini put out the Non Mollare newspaper and was later assassinated by the regime.

Signora Rosselli was a mother figure to the younger members, like Tullia Zevi, then a harpist with the New York City Symphony Orchestra. 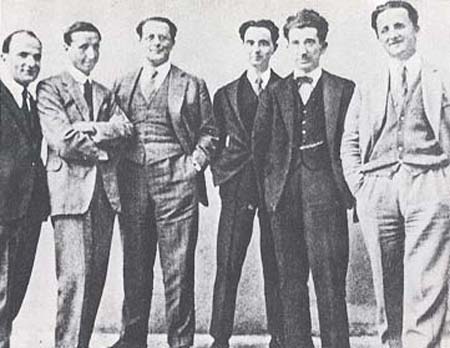 Having emigrated to escape racial laws, the Jewish-born Zevi returned to her native Italy in 1946, where she became a renowned journalist for her coverage of the Nuremberg trials. In 1962, she opened her home to politicians Pietro Nenni, Giuseppe Saragat, and Schlesinger, an old friend from her American years who agreed to intervene with Kennedy so that the U.S. would give its blessing to the Italian Socialist Party, which was about to come into power after having gone underground during the dictatorship. Two years later, in 1964, Saragat became President of Italy.

The Society had no shortage of opponents. Luigi Sturzo, a priest and politician who is considered a founder of Christian Democracy today, didn't appreciate the secular position, famously stating: "I, a Catholic, cannot put upon my work an insignia bearing the name of a longstanding anti-Catholic, whatever his merits, which, by the way, I have recognized not just recently but for some time now."

And Emilio Lussu — who penned the novel that would become the 1970 World War I film by Francesco Rosi, Many Wars Ago, and who later founded a political party that blended Sardinian nationalism with social democracy — actually traveled to the United States to try to convince the Mazzini Society to ally itself with the communists. He wasn't successful.

In 1944 Life Magazine published, with much fanfare, the manifesto Freedom for Italy Now, signed by the Society's most influential members.

By 1949 almost all the Mazzini Society members had returned to Italy. Salvemini immersed himself in the political struggle, bringing to the columns of Il Mondo all the advice and ideas gleaned from his Harvard years — steering clear of any traces of dogmatism, bureaucratic excess, political opportunism or ideological diversions.

It was indeed these principles — together with inspiration provided by Mazzini and the spirit of "Risorgimento" harkening back to Italian independence and unification — that formed the very foundation of the association born that day 80 years ago in Northampton.