Turkish schools are taking steps to cultivate a "pious generation" by rewriting history and placing a greater emphasis on religion.

ISTANBUL — Forget about Charles Darwin's theory of evolution. Starting this year, Turkish students will instead be taught that human beings were created by God. They'll also learn about jihad, an announcement that triggered an outcry in secular circles.

To be sure, Turkish Education Minister Ismet Yilmaz rushed to assure everyone that students would not learn about religious wars. The true meaning of the word "jihad," he contends, is "love of country." The secular opposition party CHP has responded that the government is instilling in "children's brains the same attitude that turned the Middle East into a bloodbath."

The school year in Turkey began in mid-September, bringing the conservative government's latest education reforms into effect. And while Yilmaz has downplayed the changes as a "simplification of the learning material," his critics maintain that the curriculum revision is radical. For them, the quarrel over educational content and textbooks is more than a struggle for the correct educational program. It is a fight for the direction of the republic: a question of whether children will continue to be raised in the spirit of founding father Mustafa Kemal Ataturk, or shaped instead into the "pious generation" that Turkey's current leader, Recep Tayyip Erdogan, wants to cultivate.

Some of the anger is directed against a reform aimed at changing access for further schooling after eighth grade. The entrance exam that was in use until recently was suddenly abolished, replaced by a new test as well as a district system that takes home addresses more into account when assigning students to schools. That, critics say, will benefit the so-called Imam Hatip schools, whose original purpose was to educate clerics.

The number of such schools has skyrocketed in recent years. Of the approximately 1,150 that exist nationwide, more than 900 were established after Erdogan's Justice and Development Party (AKP) entered government in 2002. The number of students enrolled in Hatip schools surged as well, from 100,000 to 1.15 million.

The reforms are justified, the education ministry claims, by the unreasonable pressure on students to get high marks. But critics like Ayfer Kocak, 42, a math teacher and the Istanbul district chair of the leftist education union Eğitim Sen, aren't buying the argument. Getting into prestigious high schools, she claims, is still not an option for many children. These students are split up among different types of schools, increasingly religious or private institutions, which stand to benefit from the reform.

"The basic idea is right: To have good schools right in the residential district," says Kocak. "But they should open more good public high schools."

Education policy was a site of cultural trench warfare even before the AKP came to power. After the 1980 coup d'etat, the military enacted its concept of "Turkish-Islamic synthesis." The idea was to tame the subversive force of religion by merging it with nationalist elements. The Islamist movement, which later gave rise to the AKP, also took shape at that time.

Under the AKP, the education issue has become even more divisive. For years, the party lobbied to ease the headscarf ban at universities and schools — a frontal assault on the foundations of the republic in the eyes of the secular camp. A study by Impact-se, an Israeli organization, found that content taught at Turkish schools began to change in earnest after 2012. "The Turks are represented as custodians of Islam," the authors wrote.

The curriculum, the study found, emphasizes the compatibility of Islam and democracy, of religion and science. And it questions the once prevailing opinion of secular scholars that the Ottoman Empire and Turkey lagged behind technologically because of Islam. "The curriculum depicts Turkish-Islamic civilization in relation to the Western world, and in some cases as superior," the Impact-se researchers wrote. The year 2012 was also when the AKP government introduced the controversial 4+4+4 system, which permits students to attend an Imam Hatip school as early as fourth grade. 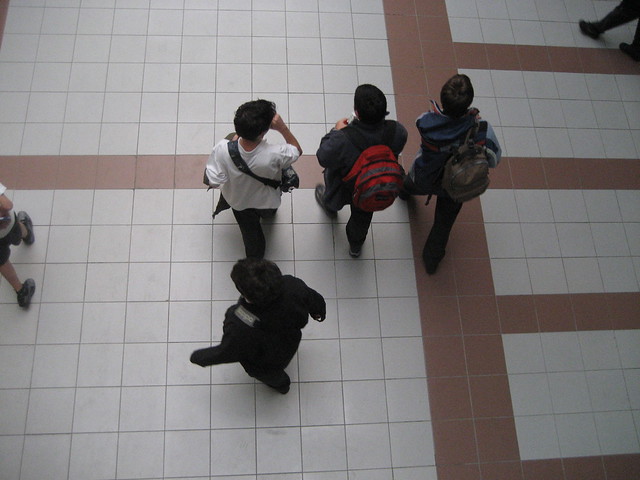 From above, at school in Istanbul — Photo: ccarlstead

The failed coup attempt last year and the constitutional referendum this year in which a narrow majority voted for a presidential system accelerated the educational reform process. Thousands of educators have been fired since the thwarted putsch. Meanwhile, Education Minister Yilmaz introduced new syllabi that limit both the natural sciences and the arts. Some topics, like evolution, were axed completely.

Darwin's teaching, Yilmaz explained, overwhelms students who should instead concern themselves more with values and religion in the classroom. But critics call the curriculum a clear extension of the AKP's political beliefs, and lament the emphasis it places on religious issues and the attempted coup at the expense of the natural sciences and Kemalism (Atatürkism), the republic's founding ideology.

For Esra Aksu, 29, the reforms are an "absolutely negative development." The designer has no children, but lives with her 15-year-old brother, who attends a renowned vocational school in Istanbul. "Rational thinking has been put aside," she says. "Of course, children should learn something about Ottoman history. But isn't it more important that they learn about who founded the state?"

President Erdogan apparently takes the opposite view. In May, he lamented in a speech that the Turkish people have been taught "a pathetic past." With the new curriculum, he said, the textbooks tell a "glorious and illustrious history." They portray the Ottomans in glowing terms while glossing over their downfall.

The curriculum takes a similar approach to more recent events such as the coup attempt in 2016 have also come into focus. While the events of June 2016 are still shrouded in mystery, textbooks celebrate the heroic popular victory over the plotters. And they clearly identify an enemy: the Gulen Movement, which is called a terrorist organization and the root of all evil. The classification of the Gezi Park protests in 2013 also conforms to the government's belief that it was a conspiracy devised by internal and foreign powers.

Labor union member Ayfer Kocak sees another problem: The new books propagate a conservative image of women. They picture veiled women who take care of their children and homes, and describe obedience as a religious virtue. "In their 'religious culture' course, the man is defined as the boss," she says. "The woman is made to show respect and obedience."