Chessboxing: How A French Novelist Invented The Strangest Sport

More than 25 years after graphic novelist Enki Bilal invented a fictional sport that combines chess and boxing, it is now a very real — and growing — pastime.

PARIS — Thomas Cazeneuve's boxing club is like chessboxing itself: a work in progress. Next to the punching bags are the remains of a torn-down wall. But the Montpellier native pays it little mind as he does rep after rep with his jump rope.

The 26-year-old, who also works as a recruiter for the company Pay Job, is training for an upcoming trip to Turkey for the world championships of chessboxing, a peculiar sport that combines six rounds of chess and five of English-rules boxing.

Two adversaries begin in front of a chessboard, which is placed in the center of a ring. They wear ear muffs to block out any distracting noise, and for three minutes concentrate on the game in front of them. But when time expires, the board is removed, the fighters don boxing gloves, and then go at each other — again for three minutes. Afterwards it's back to the chess match, then back to slugging it out. And so on and so forth until a KO — or checkmate.

This odd mashup is the brainchild of Enki Bilal, a famous French artist who first brought the sport to life in one of his graphic novels, Froid Équateur (Cold Equator), published in 1992. Bilal's invention inspired the Dutch artist Iepe Rubingh to organize the first real-life chessboxing competition in 2003 before later starting an international federation for the sport. 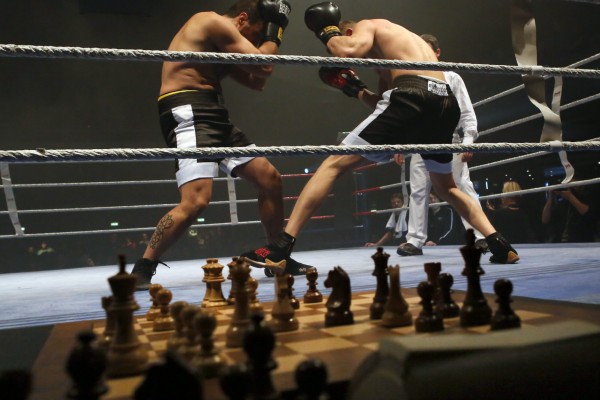 Today, there are approximately 3,500 chessboxers in the world and 10 different national federations, including one that was established in France in November 2018. As evidence of its growing popularity here, the country's first professional chessboxing match took place last month in the Parisian nightclub Cabaret Sauvage.

Thomas Cazeneuve has played a big role in the sport's development. But the story really begins with his dad, who introduced his son to chess at the tender age of just four. By 13, Cazeneuve was winning departmental and regional competitions, earning a reputation as a future star.

And so on and so forth until a KO — or checkmate.

A few years later, upon entering high school, he discovered boxing and other combat sports as well. Why? "I saw Rocky during summer vacation and I decided to give it a try," Cazeneuve recalls.

Of course, there's still the question of how it occurred to him to combine the two disciplines. This, again, is where Cazeneuve's father played a key role. After reading an article about chessboxing, he announced to his then 18-year-old son: "I've found the sport for you."

As fate would have it

Since then, Cazeneuve has had just one goal: to become the chessboxing world champion. The only problem was that, initially, there was no structure in place in France. Then, in 2015, he finally found someone to help his quest: Olivier Delabarre, the founder of a chessboxing club in Dieppe, on the English Channel. Together, they created a demonstration of the sport for a web-series sponsored by the Canal+ television network.

A big stroke of luck took Cazeneuve's career to the next level. As part of his business-school program, he had to find an internship abroad. "I got an offer to go to Stockholm, but I turned it down without even really knowing why," he explains. "I just had the feeling that wasn't where I was supposed to be."

He ended up in Berlin, which just happens to be home to the very first chessboxing club, founded in 2004. Coincidence? Cazeneuve decided to get involved, of course, and soon found himself playing against the club's top fighter. The Frenchman won — by checkmate — but what he didn't realize right away is that he'd just beaten none other than Iepe Rubingh.

The Dutch chessboxing pioneer decided to take Cazeneuve under his wing and organize matches for him. In April 2016, the French chessboxer competed in his first official fight, which he won by checkmate, as he has with seven of eight fights to date.

Imagine if I could win a gold medal!

From there Cazeneuve took his dreams of chessboxing glory to India, for the 2017 world championships. He made the trip by himself with money he'd collected through a fundraising campaign. One of the contributors, as it turned out, was Enki Bilal. "He called me to say how happy he was that a French person was participating in the sport," Cazeneuve recalls.

Despite coming down with food poisoning on the eve of the championship bout, the young French fighter won, taking home the first ever world chessboxing title in his category (under 66 kilos).

"Arriving back in France was just crazy," he says. The press took note of his accomplishment, and that gave the sport new visibility. That, in turn, inspired other people to take up chessboxing and to eventually form a French federation, headed by Guillaume Salançon.

Cazeneuve is happy to no longer be alone in his pursuit, but he knows that there's still a long road ahead for the sport. There are still only a handful of chessboxing clubs in France. Still, that doesn't stop him and his fellow French chessboxers from thinking big. Salançon, for one, doesn't see any reason why France couldn't eventually host a world championship. He and Cazeneuve are also hoping the sport will be included for the 2028 Olympic Games.

"I won't be that old," Cazeneuve says, making a quick calculation. "Wow, imagine if I could win a gold medal! But honestly, just participating in the Olympics would be amazing."

Worldcrunch is delivering a daily update on this COVID-19 crisis from the best, most trusted ...

Face Masks And A Flâneur In Paris

PARIS — There's a price to be paid, in euros and other things, when you choose to live in ...