Growing up in the 1970s in the hectic but more innocent India, the magazine offered a young man the right dose of irreverence to shape his world view for a lifetime.

NEW DELHI — So MAD magazine is closing down. It will, from now on, only republish old material and annual specials. The ‘Usual Gang of Idiots‘ will no longer put their creative minds together to bring out, month after month, that compendium of insanity, cheekiness and satire, casting a skew-eyed look at the foibles of the world and its big shots, celebrities, film stars and most of all, politicians.

The news has been mourned everywhere. Generations of youngsters have been reared on it, and truth be told, their worldview has been warped — in a healthy way — to allow them to make sense of everything that goes on around them. No ego is too big to skewer, no pretensions too small to prick. It takes one back to a long time ago, when MAD was an integral part of one's reading diet, as much as inexpensive Soviet publications, representing two opposite poles of the spectrum.

For a schoolboy growing up in urban India, the 1970s were a mixed bag. The political turmoil, the economic sluggishness and the social upheaval all loomed large and cast a shadow in the background; but at the same time, life was more innocent, with a lot of time for leisurely pursuits.

Adults talked about agitating students and political splits and there was no escaping food shortages and other economic hardships even for the salaried classes. Yet, childhood and adolescence were about simple pleasures, such as games, movies (with ice cream), books and the most wonderful of them all, comics. (These are now called ‘graphic novels' with the accompanying gravitas). Among the funnies was MAD.

In that quite obviously pre-internet era, books were a lifeline for those interested in the world. Television was relatively new. TV broadcasts started in Mumbai (then Bombay) though Delhi already enjoyed a few hours of programming. TV sets were expensive and everyone landed up uninvited at the home of the better-off neighbour who had acquired one. But books were a solitary pleasure, opening up a private universe to dive into.

A younger person craved for something more popular, even trashy.

The voracious reader did not need to spend money to buy books — every neighborhood had a ‘circulating library' which stocked bestsellers, pulp crime novels and foreign magazines, which were expensive or simply not available.

Many homes subscribed to Readers' Digest and even perhaps National Geographic, but while these were worthy in their own way, a younger person craved for something more popular, even trashy. MAD magazine fit the bill. It was not exactly trash — far from it, and looking at those issues now, one realizes how intelligently put together it was — but it was certainly not edifying enough for adults who would have wanted their children to read more high-minded stuff. The children, in turn, loved MAD for its juvenilia and biting satire that spared nobody.

We were all devoted fans of Alfred E. Neuman, with his gap-toothed grin, somewhat goofy but with quiet intelligence in the eyes, as if he was laughing at the absurdity of it all but still harboring hope. "What, me worry?" was his catch line and our slogan – he was telling us that the only way to understand the world was to look at it upside down.

The names of the contributors, after all these years, still slip off the tongue easily: Mort Drucker for his superb drawings in the movie spoofs (‘The Oddfather', ‘Botch Casually and the Somedunce Kid', ‘Antenna on the Roof'), Al Jaffee on his fold-ins, Dave Berg for a wry look at the American way of life, Sergio Aragones and his marginals, ‘Spy vs. Spy', the biting take on the Cold War by Antonio Prohias and above all, Don Martin with his onomatopoeic renditions. Who doesn't remember the spitting contest gag? Only one Indian cartoonist, Sudhir Dar, made it to MAD, with a few drawings featuring cows and the like — he was called ‘A Tasty Indian Nut'. 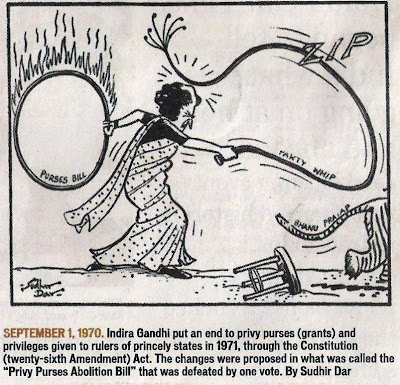 It wasn't immediately apparent to a young reader then, but MAD often provided more insight into American popular culture and politics than the big, mainstream media. A few strokes of the brush and a lot of witty writing offered a take that was immediately relatable, cutting through the clutter of the mainstream press and television channels.

President Nixon was a particular favorite, and MAD was in the forefront of nailing him, in one memorable instance putting him on the cover in a spoof on the movie The Sting, and calling it ‘the big con.'

Indians have a sense of humor, but our leaders don't.

For us, in far away India, MAD was a window to America, providing an off-kilter perspective, no doubt, but an alternative view to the other publications that came our way. It did not harm our view of the country, which was then mired in a war in Southeast Asia and was not seen as a particularly close friend of India.

If anything, it reflected a robust public culture that allowed criticism. We read MAD because it spoke to us, in a language we understood, not just about America, but about universal values of liberalism and because it busted phoniness of all kind.

India could do with its own MAD — this was a common thought among many people who felt that our big shots needed to be brought down a peg or two. Someone started Deewana, first in Hindi, then English, which had its own version of Alfred E. Neuman, and all the regular columns, including film spoofs. It was a valiant effort but did not last long.

I have often wondered why there are no local equivalents of MAD, Private Eye or even Le Canard enchaîné? The last two also feature hard-hitting investigative journalism along with sharply observed satire. To me, the answer is clear — Indians have a sense of humor, but our leaders don't. If they cannot tolerate even mild criticism in the newspapers, they would be enraged at any satire that makes fun of them.

MAD's moment is gone. With the plethora of alternatives available, especially online, millennials have many more distractions. Magazines are dying out. MAD TV remained a modest success and the digital version is just one of the millions of websites clamoring for attention. It's possible too that the younger reader just doesn't "get it," and may find MAD's humor puerile (it is, that's why it's great.) Besides, people also take offense easily — that will obviously constrain true satire. It's also true that the way the world is going today, the leaders that have emerged are parody-proof.

For a different generation — baby boomer, flower children, whatever they are called — who are now heading to senior citizen status, MAD remains a totem, not just a quaint cultural artefact but a guiding light to make sense of a topsy-turvy world.

Demarkated by the British for tax purposes, these villages have since been swallowed by India's m...

Trump Lost, But "Our America" is Gone — A View From Abroad

Reflections on an election from far away, but still so close.