As a growing number of people pack up and leave the former British colony, the question arises: What to do about the family dog?

HONG KONG — Sesame, an 11-year-old poodle, has gone to the kennel twice now, and it's clear she didn't appreciate the experience. She came home both times with tummy trouble, throwing up and with a loss of appetite.

The animal's owner, Florence, organized the kennel visits as a kind of "training" experience, a way to prepare Sesame for an upcoming trip to Taiwan, where the family plans to emigrate. She'll have to travel alone in a plane's cargo hold. That, plus a quarantine upon arrival, will take at least seven days.

Florence is part of an unprecedented wave of emigration taking place in Hong Kong, and as Sesame can attest, the shift is impacting pets as well.

In order to take their cats, dogs, turtles or lizards with them, many emigrants take the trouble of going through the complicated veterinary regulations of their destinations. Many pay tens of thousands of HK dollars to specialized agencies to deal with pet-immigration procedures. Others even spend millions to hire a private jet, taking themselves and their pets on board.

But there are also plenty of people who leave their animals behind. Indeed, in the past six months, the Lifelong Animal Protection charity (LAP) in Hong Kong has received many requests from people looking for somewhere to leave their pets. And by at least one count, the number of pets abandoned in 2020 has increased by 15% compared to previous years.

The phenomenon has not gone unnoticed by the Hong Kong Society of Herpetology Foundation — HKHerp, for short — which occupies a small space (just 300-square-foot) in an industrial building in Kwun Tong.

Huang Lanyan, one of the foundation's volunteer workers, is struggling to find new owners for a massive number of Brazilian tortoises, box turtles, corn snakes, ball pythons, and taiga lizards. Since last year, the number of abandoned reptiles and amphibians has soared from fewer than 10 cases a year to more than 10 per month, HKHerp reports.

The emigration wave is keeping Chen Juntao busy too. He runs pet migration business, and says that in the past year alone, he's helped send off more than 500 cats and dogs, about half the number he handled in the previous four years combined. "And we have still have 300 hundred more pets to send away," Mr. Chen explains.

The business owner notes that the capacity of airlines for pets is very limited for the moment. British Airways is a case in point. The past year, the price of pet seats has increased five times while the number of pet flights decreased. "What concerns our clients most is the health of the animal and the worry that there's no seat for their pets," he says.

For a dog or cat destined for the United Kingdom, Mr Chen's services provide for the animal's quarantine, flight and custom clearance, and the cost can range between 30,000 to 100,000 HK dollars ($3,800-$12,800), depending on the size of the animal. Also, if the client is particularly well-off and loving of their dear pets, a pampered private jet or chartered group service can be provided. 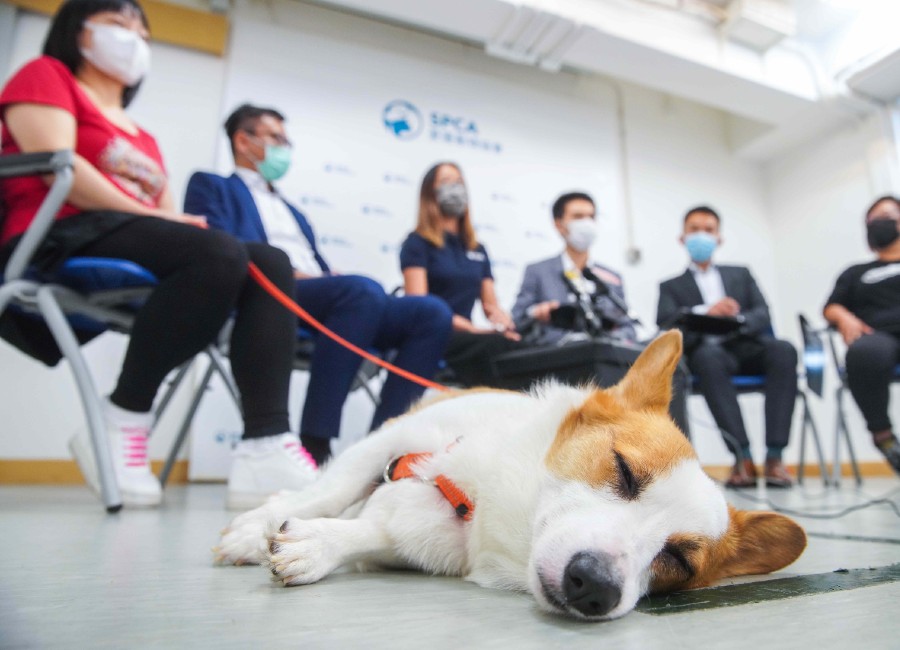 In the case of Florence, she says she won't fly "unless Sesame is flying with us." She is so worried that the 11-year-old dog will have trouble breathing in the cargo hold.

Recently, a client of Chen emigrated to the United States with two French bulldogs. He had taken a private charter plane and hired a pet sitter to accompany the flight. The bill for the travel expenses, pet immigration services, and the quarantine fees incurred after the pet sitter's return to Hong Kong was a lavish 2 million HK dollars (nearly $260,000).

Mathew, another pet migration services agent as well as a veterinarian, says that this kind of service has existed for a long time. The difference is that until recently, most of the clients — at least in the case of Matthew, who launched his company in 1994 — were expatriates sent to work in the former British colony.

He was helping people import pets, in other words. Not export them. Now, Matthew's clients are mainly local people moving away to Britain, Canada or Australia.

Liang Wenyun has also spent a number of years in pet migration services, and says that what she finds most remarkable is the wide range of pet species that urban residents keep — spiders, peacocks, ants, guinea pigs, lizards and even goats, you name it.

Each species, furthermore, requires services that are specifically adapted. There's the physical condition of the animals to consider, obviously, but also the import and export policies of each government. "For example, to insert a chip or impose a ring on a parrot that weighs only 70 grams would be a considerable burden for the bird, so it's best to listen to a veterinarian's advice," Ms. Liang explains.

In other cases, certain animals simply can't be transported from one place to another. A Brazilian tortoise, for example, is considered an invasive species by the UK government and therefore prohibited from entry.

It amounts to a death penalty for the dog.

Complicating matters for would-be emigrants are the animal-related horror stories. There have been reports of pets being suffocated in the aircraft cargo hold on the journey, and of pet agencies disappearing after taking money.

More often, though, it's the pet owners who do the disappearing. Aunt Qi is the owner of nine pet huts, called the "Comfortable Nest," which house abandoned dogs and also provide temporary respite care for dogs as well as cats.

Since the end of last year, more and more people called up Aunt Qi to ask whether or not she'll take over the pets they no longer want to keep. Meanwhile, the number of pet owners who entrusted her with the temporary care of their dogs, but who vanished after a few months, has also soared.

One of the couples who put their dog in her hands last year phoned recently to say that they are emigrating and suggested that Aunt Qi send off their dog to the Hong Kong government's Agriculture, Fisheries and Conservation Department (AFCD).

"This amounts to a death penalty for the dog," says Aunt Qi.

In accordance with Hong Kong law, the AFCD will "humanely treat" stray animals sent to the institute after an assessment. If the animal is not taken by an animal welfare shelter or not claimed within four days, it will be put down.

Current laws in Hong Kong also make it hard to restrict pet-abandoning behavior. According to the Cap. 421 Rabies Ordinance, "An animal keeper who abandons animals without a reasonable explanation is a breach of law." But as the Hong Kong Legislative Council Press Bulletin shows, due to the difficulty of producing evidence, there have been no successful prosecutions in the past five years.

"Humans have a lot of things surrounding them. But for the animal," says Alice, who works for an animal welfare association, "it only has its owner."