The pandemic, and especially the fears whipped up by states and the media, may be pushing society toward greater submission to the world's powers.

BOGOTÁ — We all know that confinement has been a valuable means of slowing contagion long enough for governments to ready the health care systems they had been neglecting for the immediate challenge of coronavirus. But we also knew from the start that quarantine could not be permanent.

It can last for three or four months at most, and regardless of the need for alternatives like rigorous and voluntary social distancing, and new forms of production and exchange, confinement will unravel because of its own, internal tensions, in spite of government instructions. States cannot keep on paying subsistence payments to all without some form of productivity, nor can a community exist if citizens are deprived of initiative and freedom.

The gravest error might be to think that the alternatives are inevitably incompatible with one another. Quarantine in cities, which protects us from gatherings, congestion on public transport and thus hospital saturation, differs from locking down villages and towns where contagion is more easily contained by other means, or from immobilizing people in the countryside who produce a good deal of our food. There you can be confined and alone, with nature as your only company.

Why are citizens not finding a way of being an active part of the solution? Why have they instead accepted confinement and passivity as their only contribution? What is the state? Why does its undoubtedly sincere efforts to save lives always end up taking punitive forms?

The elderly among us are precisely those who do not need more quiet and sedentary living: What is the sense of harming their health to protect them from death? Or the policemen who issue fines and are working hard on the street — are they not as likely as anyone else to spread the virus?

My brother Juan Carlos rightly suggested to me the idea of social distancing "managers" circulating in neighborhoods and instructing people in the new civil practices. That itself would constitute work and income for youngsters in those neighborhoods.

How to rid ourselves of so many paradoxes? How can we accept calls to adore science as our only savior, when we hear stated with increasing intensity suspicions about the virus slipping out of some hermetic laboratory? 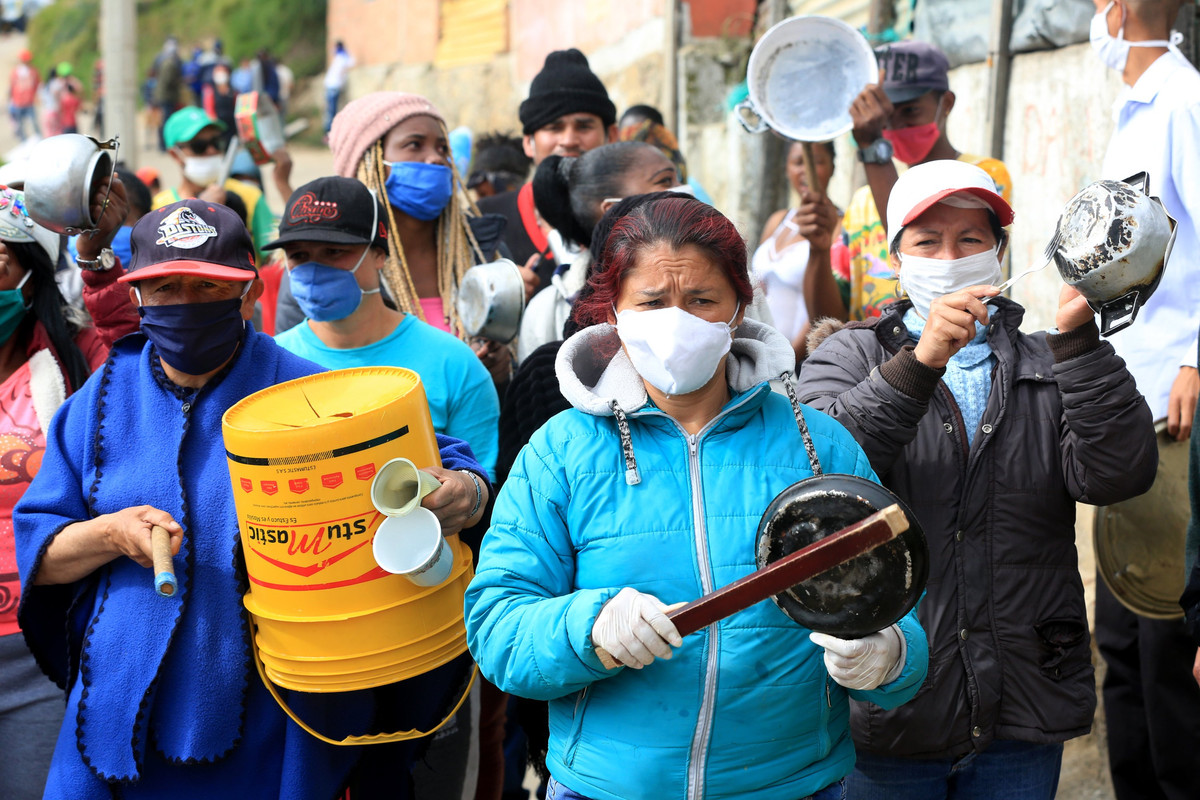 The inhabitants of a neigborhood of Ciudad Bolüvar block the roads in protest of not having received aid from local or national governments — Photo: El Tiempo/GDA/ZUMA

Nothing is free of suspicion in our world today, not even the powers that claim to protect us against all dangers, and impose a health routine on us and insist death must come in an orderly fashion. With a generous, universal health care system, citizens wouldn't have to bear the entire weight of their own health, and life would not become so risky to some and profitable for others.

Each planetary situation is raising more questions. One sometimes has the impression that, like an iceberg, a good deal of the truth is hidden beneath this pandemic. One wonders how China managed to protect the world's biggest population from the virus and come out with fewer than 5,000 fatalities. Nor do we know why India, with a similar population, has so few infections and deaths. It would seem we also have a lot to learn from Vietnam, with a population of 91 million, a 1,281-kilometer border with China and not a single virus death yet. Why do mortality rates vary so much between countries with equally abundant elderly populations and health systems that are still working?

One sometimes has the impression that, like an iceberg, a good deal of the truth is hidden beneath this pandemic.

Are certain people right to observe that the pandemic's 250,000 deaths so far have made us forget the half-million deaths every year from AIDS, 200,000 seasonal flu deaths, 278,000 deaths due to dirty water or the 450,000 deaths in traffic accidents so far this year. The media is aroused by this pandemic, which is not the same as being sensitive to or understanding of avoidable situations of human suffering, like some 20,000 daily deaths from hunger.

The pandemic and its healthcare crisis are certainly not as surprising as their emerging social reactions. In our case at least, poverty will soon end confinement, in spite of the contagion risks involved. People do not go scavenging for refuse or discarded material for fun, but as the only survival option that politics and society have left them.

The pandemic has undoubtedly uncovered a trough of injustices, madness and paradoxes in our modern, daily reality. Colombia, for example, derives a good part of its income from three tragedies: oil, mining and drugs, plus remittances from Colombians who had to leave. Does all this not force us to design an economy based on work — a powerful alliance of farming and national industry — and to make the country a homeland to its people again?

Why are people who wish this pandemic could lead to historic changes told to stop dreaming, or reminded that nothing will, or should, change? Remember, the only way to get nothing is to ask for little.

The pandemic has undoubtedly uncovered a trough of injustices, madness and paradoxes in our modern, daily reality.

What a shame we had to lock down just when people around the world were starting to mobilize and youngsters were finally taking to the streets in their fight against climate change. Why do illnesses compound power, and citizens become society's least visible elements? Why does the state recover its initiative just to administer an emergency and confine people, when it had none to save the climate, curb the destruction of nature and industrial pollution, or to moderate consumption?

Finally, one wonders if the communication overdrive is intended to make us feel that our existence depends on it. Is this the culmination of the ideal of using comfort to weaken humanity so it can be easily dominated with fear? Heeding the lessons of this situation, we may soon have to choose between security and freedom.