Advertising has us convinced that cheap meat is something we can't live without. But the meat industry is based on exploiting both people and animals.

In literature, abattoirs are a symbol of exploitation. Perhaps the most famous example is Upton Sinclair's 1906 novel The Jungle, where Lithuanian Jurgis Rudkus leaves his home country in search of a better life in the United States. There the friendly but perhaps naive young man finds work in the Union Stock Yards in Chicago, the center of the American meat packing industry in the 20th century.

The Stock Yards employed 40,000 workers, who slaughtered and butchered around 10 million livestock a year. It was a scene of utmost exploitation of people, animals and the environment. Workers lived in extreme poverty, completely at the slaughter house's mercy. They had poor housing and there was a pervasive stench of blood and intestines.

The nearby river was so polluted that it was nicknamed Bubbly Creek because of the gas it gave off. For the company — which almost singlehandedly met American demand for meat — people, animals and the environment were no more than goods to be consumed. The meat industry's business model was entirely dependent on exploiting the land and its people.

A kind of modern form of slavery exists, and we shouldn't keep ignoring it.

But is this depiction of an abattoir simply a relic of times gone by? Or is the abattoir today still a symbol of our time, an embodiment of a value system gone awry? The tendency is to turn a blind eye to these questions, but the coronavirus pandemic is changing that and reminding us of we've known for more than 20 years: that workers in the meat industry are being pushed out of stable jobs and replaced by short-term contracts and subcontractors.

Just as at the beginning of the last century, when people moved to the United States in search of the American Dream and found only exploitation, today in Europe a kind of modern form of slavery exists, and we shouldn't keep ignoring it.

Is our food really so important that we are content to harm the environment, animals and even people? Have we become so desensitized to exploitation, or are we finally losing our appetite for it?

If we believe the advertising slogans, cheap meat is something we can't live without. We buy a barbecue for 400 euros, but use it to grill sausages bought for 66 cents.

The pandemic has led many of us to re-evaluate the way we live. We have thought about what we truly value, and how much of our lives are simply about chasing after the next thing: always more growth, always more products that we don't really need. It is now high time to think about our food. We cannot accept that the meals we enjoy when gathered around the table with our loved ones are produced by exploiting the poor. 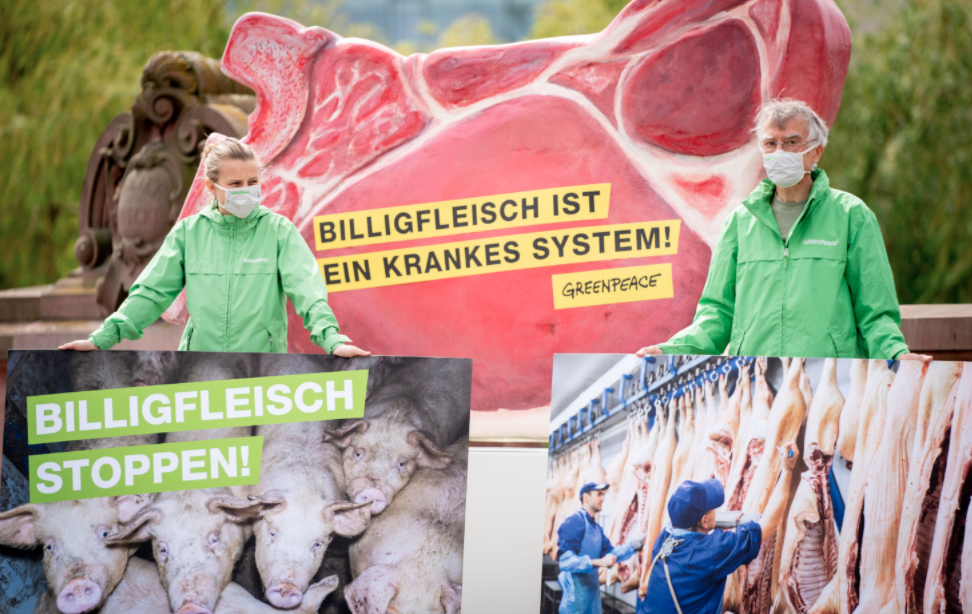 Greenpeace protesters in Berlin on May 20 — Photo: Kay Nietfeld/DPA/ZUMA

Inspired by Sinclair's novel, Bertolt Brecht wrote his play Saint Joan of the Stockyards, also set in the Chicago meat packing district. He called for individuals to rise up against the injustices of the industry. It's a call we would do well to heed today. We have no automatic right to consume cheap meat. But we do all have a responsibility to behave in an ethical way.

Some people contend that the workers themselves shouldn't put up with exploitation. But that argument doesn't hold as long as there are such vast differences between living and working conditions and economic development in individual EU member states.

We allow companies to employ people on exploitative contracts, and don't set minimum wages that are sufficient for workers to have a good quality of life in the area around their workplace. The meat industry's exploitative system is not caused by freedom of movement within the EU, but by companies exploiting that policy. People are now seen as fair game.

We have no automatic right to consume cheap meat. But we do all have a responsibility to behave in an ethical way.

Some people argue that the unethical companies taking advantage of workers are only a few lone wolves, but in reality the problem is the lack of regulation, which allows the meat industry to adopt this business model. The whole system is a wolf in sheep's clothing.

Nothing will change unless we ensure that the authorities carry out regular, unannounced inspections of working conditions and that supervision is not the sole responsibility of the local authority, which has a vested interest in the tax income from these companies. Nothing will change as long as we allow district administrators to sit on company boards.

In Brecht's play, Saint Joan says, "People only help when people are there." That's true. And we must be these people: as consumers, as politicians, as union members, as value-driven citizens.

Our food culture must leave behind a model where ovens and barbecues are as expensive as possible, while the food we buy from the cruel meat industry is as cheap as we can make it. We will not only be benefiting workers, animals and the environment, but also our own health. Coronavirus must spell the end of this exploitation — and also the end of cheap sausages.

*The author is a German politician representing the Green Party. From 2001 to 2005 she was Minister of Consumer Protection, Food and Agriculture.

Worldcrunch is delivering a daily update on the COVID-19 crisis from the best, most trusted ...