Latin American countries are, for the most part, appreciative of Beijing's donations of much needed medical supplies. But the goodwill isn't guaranteed to last forever.

BOGOTÁ — For some time now, the People's Republic of China has been donating medical supplies to countries all around the world. Analysts call it "facemask diplomacy," and in the United States and Western Europe there are plenty of skeptics.

In Latin America, in contrast, Beijing's efforts have mostly been well received. What remains to be seen, however, is whether the positive feelings last. And that could depend in the coming months on China's posture toward Venezuela.

With the exception of certain Latin American states that have ties with Taiwan, countries all across the region have received some form of aid from China. Little wonder that in late March, the Chinese Foreign Ministry's Latin American and Caribbean department organized a videoconference, with some 200 government officials and health experts from China and Latin America exchanging views on the pandemic and responses to it.

China's private sector is also reaching out. In late March, Jack Ma of the Alibaba Group announced that he would make donations to 24 regional countries. Firms like Tencent, Huawei, COFCO, China Communications Construction and the Bank of China are helping as well.

The cooperation is driven, of course, by larger interests. China seeks to promote its geopolitical primacy and political influence, consolidate economic and trade ties, gain access to natural resources, and boost its image abroad. As a new, soft-power tool, facemask diplomacy is means, therefore, for China to increase its presence in the region's socio-political sphere. 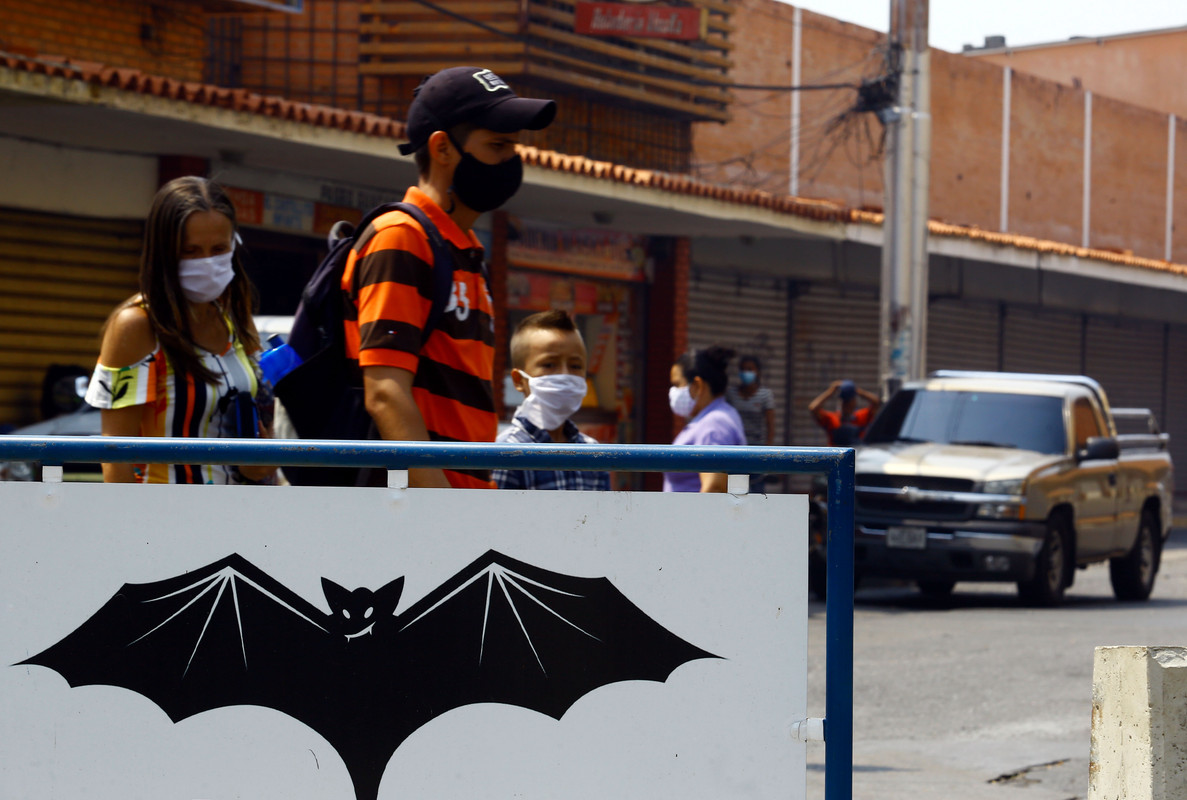 People walk near signs depicting bats, a symbol of where the coronavirus is believed to come from, in the streets of Guacara, Venezuela. — Photo: Juan Carlos Hernandez/ZUMA

Interestingly, the first Latin American country to receive Chinese medical staff, in late March, was Venezuela, which is also one of the region's most vulnerable when it comes to containing the pandemic. A poll taken by the country's National Assembly showed that 88% of hospitals lack basic medicines and 79% have shortages of surgical equipment. The poll also showed that all laboratories in the country have insufficient reagents needed for their work, 53% of operating rooms are not working, and 79% of hospitals do not have regular water supplies.

A sociologist and food security specialist at Venezuela's Central University, Édison Arciniega, estimates, furthemore, that 8 million Venezuelans are suffering from acute hunger, which affects the immune system. He worries, as a result, that the coronavirus may become five times as infectious there as in countries with stable sanitary conditions, and 10 times as lethal.

"These figures indicate a worsening of the humanitarian crisis that pushed 5 million Venezuelans to leave the country in recent years," he said.

As a new, soft-power tool, facemask diplomacy is means, therefore, for China to increase its presence in the region's socio-political sphere.

China's donations to Venezuela are being made, however, through the government of President Nicolás Maduro, the same administration that caused this crisis. This is the political group that has wasted the biggest oil bonanza of the country's history and mismanaged $65 billion of loans from China.

Just as the country's petrodollars were used to buy political allegiance in the region, the Maduro regime employs the aid it receives from China, or any other, as a political weapon rather than to benefit ordinary Venezuelans. A case in point was Maduro's announcement that Venezuela would send testing kits to Saint Vincent and the Grenadines, a relatively prosperous country, just two weeks before the UN Security Council was to discuss the state of Venezuela. Along with Russia, Saint Vincent was one of just two states that then emphatically defended the Maduro regime.

The Chinese government hasn't said so publicly, but it has long been aware of the state of Venezuela. In 2016, it sent a delegation to Caracas to convey its concerns over security and the money owed to China. Certain Chinese officials stated that there was consensus in Beijing that no more money should be invested in Venezuela and the regime be abandoned. An increasing number of Chinese analysts have also decried loans to Venezuela as a waste of public money, or just bad debt.

Most Latin American states recognize Juan Guaidó as Venezuela's provisional president and legitimate head of state. Thus the Chinese government's position and actions there will affect how the region perceives China in the short and medium terms, since the Venezuelan crisis has already spread beyond its frontiers.

If Venezuela were to become the pandemic's regional hotspot, it would seriously affect the ability of neighboring countries to contain the virus, with unforeseen consequences. And while Maduro clings to power and Venezuela's situation worsens, any country perceived in the hemisphere as Maduro's friend would be risking its relations with the region.

There are limits, in other words, to just how far facemask diplomacy will go.

*D'Sola Alvarado is head of the Andrés Bello Foundation in Bogotá, a private research group focused on China and Latin America.