A Recovery Recipe For French Restaurants

The famed restaurant "Fouquet's" on the Champs Elysées in Paris. - — Xinhua/ZUMA

Some of the country's eateries may not survive. Others are having to adapt — and quickly — to a still uncertain scenario.

PARIS — You're sitting at a table with your loved ones — inside a transparent bubble. The head waiter approaches, but not too close. He's wearing white gloves and a mask. He doesn't hand you a card, but a QR Code, and invites you to download the menu to your smartphone.

As surreal as it sounds, you may soon experience this scene in your favorite restaurant. But that, of course, is assuming the eatery has survived the past two months. What began on March 14 — the day professionals learned at 8 p.m. that they'd have to close the curtain at midnight — is nothing less than the sector's worst crisis in history, and the numbers have been dramatic indeed.

The French Union of Professions and Industries in the Hotel Business (UMIH) estimates that out of the 160,000 catering outlets in France, some 100,000 would be doomed in the absence of a support plan. "Most of the restaurants are very small businesses, and their cash flow represents barely two days' takings," warns Hervé Becam, the association's vice-president.

Bernard Boutboul, the founder of the Gira consulting agency and a specialist in the sector, says that if the closure were to last until mid-June, as has been rumored, at least 20% of the restaurants — about 40,000 in total — would disappear. Other sources say that "only" 10% of the establishments will fail.

We need, of course, to remain cautious in our forecasts, as there are so many uncertainties. The future of restaurants will depend on the willingness of customers to return, but also on the political decisions taken, and not just with regards to when exactly establishments will be allowed to reopen. There are also decisions to be made on hygiene rules, for example, and on when tourists will be allowed back into the country.

And it's not just a problem France. In the United States, industry guru Roger Lipton is already talking about "carnage," with 3 million jobs lost. In Canada, there are estimates that in March alone, 10% of the country's restaurants have already closed down.

After the lockdown went into effect, many cooks decided to make themselves useful and mobilized to offer meals to hospitals. Among the most effective initiatives, it is worth mentioning "Les chefs avec les soignants," the operation concocted by the chef of the Elysée Palace, Guillaume Gomez, with the journalist Stéphane Méjanès. Supported by the start-up TipToque (for logistics), Rungis Market, Transgourmet and Métro, dozens of cooks have been treating nurses, doctors and care assistants for over a month.

At the same time, chefs try to keep in touch with their customers through social media. On Instagram, Guy Martin, the double-starred chef at Le Grand Véfour, creates easy recipes from his own kitchen. Also on Instagram, Bruno Verjus, a star in Paris, tells engaging stories of gastronomy every day. Amandine Chaignot, a former "Masterchef" juror on TF1, has transformed her young restaurant Pouliche, in the 10th arrondissement of Paris, into a small producers' market as a way of ensuring at least some revenue for her suppliers.

Restaurant owners are also, of course, scrambling to save their businesses. The most enlightened, aware of the fate of their European or American colleagues, recognize that the State is here to help. 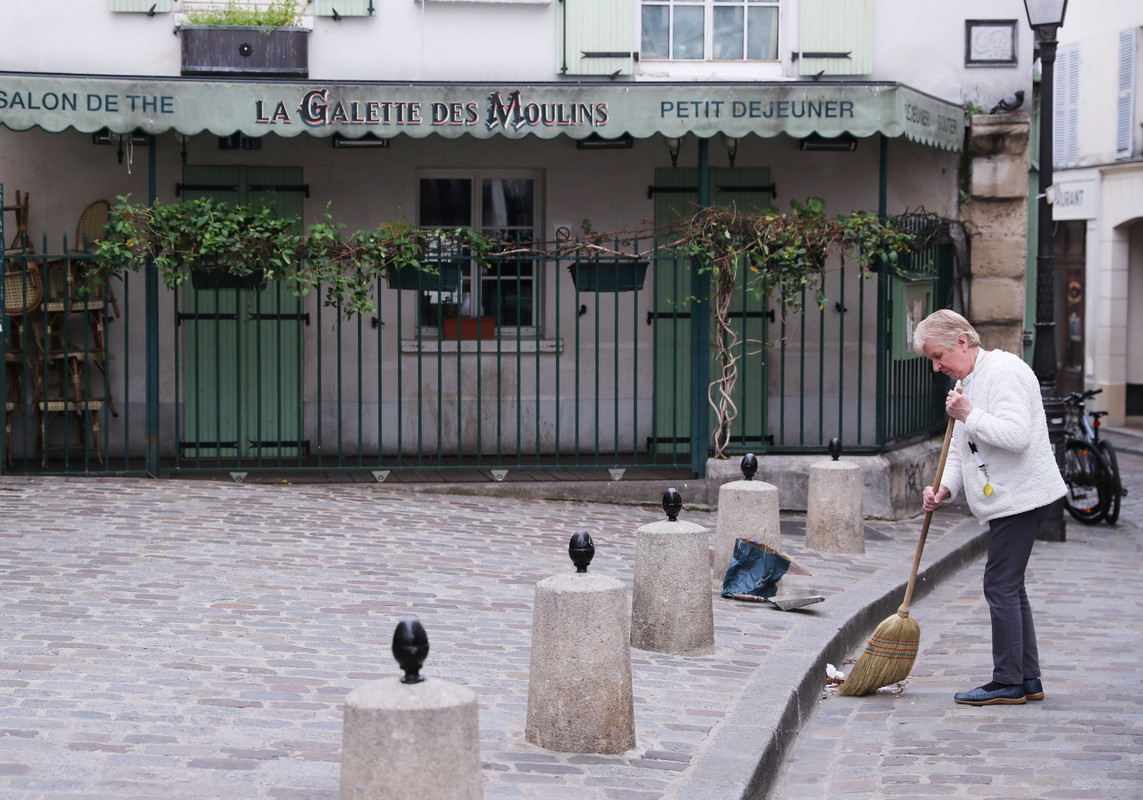 A woman sweeps the path to a closed restaurant in Monmartre in Paris. — Photo: Gao Jing/ZUMA

"We are lucky to be French!" says Yannick Alléno, the three-star chef of the Pavillon Ledoyen and Cheval Blanc in Courchevel. "We thank the Government, which is doing its best in every way. We were able to benefit immediately from state-guaranteed loans and partial unemployment so that we didn't have to lay off staff."

Grateful but worried, restaurateurs are constantly defending their cause in front of public authorities, banks and insurers. The latter have sparked anger in the profession, reminding without batting an eyelid that the business interruption coverage does not apply to the pandemic. The UMIH is furious with the insurers, and has asked for a special support fund, which they say should be financed by a future premium surcharge. This surcharge would protect the restaurant sector against a new health crisis in the future.

To address all these concerns, the French economy minister, Bruno Le Maire, organized a videoconference meeting on April 20 between restaurant owners and bank and insurance company representatives. During this exchange, the minister invited everyone — including insurers — to act in a spirit of solidarity, and asked Sébastien Bazin, the president of AccorHotels, to propose conditions under which restaurants could resume their normal activities.

But this is a delicate subject. The sector will be one of the few not allowed to reopen on May 11. Authorities say it would be too risky from a health perspective, given the exchanges and contacts between people, whether employees or customers. Irritated, some do not understand why schools would be safer than their establishments. For others, the uncertainty and waiting become unbearable.

"You can't imagine how much we're all in a hurry to get back to our customers," says André Terrail, the young boss of La Tour d'Argent in Paris. "Our job is a play that, in principle, never stops."

Led by Alain Ducasse and some 15 Michelin-starred chefs, the Culinary College of France — which brings together 1,800 restaurateurs and nearly 1,000 quality producers — has called for restaurant businesses to be allowed to reopen May 11 if they make commitments on hygiene, and on two other points: that they choose French suppliers and craftspeople, and that they maintain as many jobs as possible.

This call did not please everyone, including some within the Culinary College. The most "virtuous" — the top restaurants, in other words — would be favored. Only they would be able to invest in expensive equipment, keep their staff and buy from small quality producers. Another objection: Wouldn't it be dangerous to reopen too soon?

Our job is a play that, in principle, never stops.

In fact, the call by the Culinary College succeeded in placing the reopening schedule at the center of the debate. So much so that on April 24, a new meeting was held with representatives of the restaurant and hotel industries, only this time in the presence of President Emmanuel Macron. What better way to show the commitment of the government than a two-hour videoconference involving the head of state and three ministers? The president did not announce a date, but he did talk about a method and means.

"He has announced new support measures, but also a recovery plan and an intelligent timetable," said Alain Ducasse.

The official date for the reopening will be decided at the end of May, depending on the evolution of the epidemic.

In any case, we need to prepare for this reopening. The tables will have to be far away from each other, which will reduce the turnover. Not too serious at the start, since tourists — who can account for up to half of the turnover — will be absent. Work in the kitchen and dining room will also be reorganized to avoid contagion.

Alain Ducasse is already working on getting his establishments up and running and is thinking about the rules that everyone will have to follow, at least for several months. Masks, gel and foot baths in restaurants, even the starred ones?

"Yes, we will have to!" answers one of the most renowned chefs in the world and "godfather" of French gastronomy. "We must move towards transparency about what we eat and with whom we eat," he adds. "We are going to draw up perfectly rigorous measures that we will undertake to respect. The worst thing would be to have to close down two months after starting up again!"

The problem is that the rules of hygiene and social distancing are at odds with the conviviality of a restaurant, and even more so of a big restaurant. David Sinapian, president of the Grandes Tables du Monde network, conducted a small survey. While most customers fear having to hold a menu between their fingers that could sicken them, they unanimously reject the idea of staff in the dining room wearing masks.

"We can offer a digital menu, serve dishes in gloves, but we can't medicalize the gastronomy," explains David Sinapian. "A restaurant is not an operating theater!"

In South Korea, which is a month ahead in the pandemic's evolution, some new hygiene solutions are already in place. "In my restaurant in Seoul, we have reopened 30 out of 150 seats, and installed a 4-meter carpet that disinfects the shoes of customers entering," says Yannick Alléno. "There is gel at the entrance, and the clothes in the cloakroom are stored under plastic wrap."

As François Blouin of Food Service Vision explains: "Restaurants will have to do even better on hygiene and know how to prove it. But where they will really have to innovate is on 'contactless conviviality' and on their ability to open up to takeaways and deliveries."

As it stands now, few restaurants, especially the chic ones, offer their dishes as take-aways. First, because the Deliveroo, Uber Eats or Just Eat platforms charge a comfortable commission (around 25%) and collect customers' contact information. And second, because it is not always rewarding for a prestigious establishment to be featured on the app alongside local supermarkets. But there are ways to avoid these digital giants — by using the services Rapidle or Stuart, for example.

In the longer term, the pandemic could transform consumers' relationship with restaurants. Most leading chefs are considering narrowing their menus to reduce costs without compromising quality. Mathieu Viannay from Lyon knows that he won't reopen La Mère Brazier in the same way. "Several menus with many choices and 35 employees? It will no longer be possible!"

Anne-Sophie Pic, the most starred woman in the world and head of the Pic group based in Valence, is also thinking about getting rid of her long menu. Why not consider dining as a show? Going to dinner in a three-star restaurant could be an experience where customers are guided from arrival to departure. But some are not convinced: "Of course, we can reduce the menu to three starters, three main courses and three desserts. But as a customer, I wouldn't like to have it imposed this way," says Eric Frenchon, the chef at three-star Epicure in Paris.

Will the experience of confinement lead customers to be wiser? Will they call for a more locally focused, more responsible, more planet-friendly catering? "I have been advocating for years that we eat less meat, but of better quality, and that our plates give pride of place to vegetable proteins," says Alain Ducasse.

"We took this direction 10 years ago," he adds. "When I reopen, I will offer our customers a welcome dish, the same one in all my restaurants around the world. It will be based on locally grown vegetables and cereals, without salt or fat, served at the right temperature."

And that, after these most difficult of months, really is something to look forward to.

The Pandemic And The Perilous Return Of Plastic

In normal times, we might be writing this month about the annual momentum gathering for the ...