Tribute to Yuan Longping in Changsha, May 24. - Jing Li/Worldcrunch

He helped develop a hybrid rice that tackled hunger in his country and beyond, and when Yuan died last month both the Chinese Communist Party and young people wrestled with the many meanings of his life.

"I feel as sad as if it was my own grandpa who died." This was one of the many emotional comments that have flooded Chinese social media Weibo since the May 22 death of Chinese agriculturist Yuan Longping, also known as "the father of hybrid rice." The kind of collective mourning for the 90-year-old scientist, both from the state apparatus that called him a "national scholar of no equal" and a spontaneous public outpouring on and offline, was quite unusual for contemporary China. How did a man who divided his time between rice farms and science labs provoke such a reaction across this nation of 1.4 billion people?

Yuan's popularity among the Chinese population was largely credited to his role as a "life savior," as the rice he helped develop fed a nation that had suffered grave food shortages and famines throughout much of the 20th century. There is a popular saying among the older generation, according to which two "Pings" fed the Chinese population: Deng Xiaoping, through policy, and Yuan Longping, through technology.

Born in 1930 to an intellectual family, Yuan began researching hybrid rice in the 1960s, and carried out field experiments on new breeds up until his death. His aim was to produce quality rice with richer nutrition that could lead to bigger harvests. Unlike many scientists who spent most of their time in labs, Yuan was more of a farmer himself, having worked for more than 40 years in his experimental farm in southern China.

Yuan was the chosen one to be a god in the ads that fit the state's agenda.

The impact of his research would eventually extend beyond China, with rice being the main food staple for more than half of the world population — and at least 40 countries have imported his technology. An estimated 20% of the world rice production can be traced to his breed of super hybrid rice, which alleviated famine in much of Asia and Africa, and in 2004, Yuan was granted the World Food Prize for his work.

Still, his life and death are very much a story about modern China. The national propaganda machine had constructed Yuan's image around a kind of heroic mythology. Since the state made scientific developments a central public policy priority after the Cultural Revolution, Yuan's achievements were regularly used to advertise China's scientific strength, making him a household name.

When he died, some questioned the extent of Yuan's scientific contribution, arguing that state propaganda exaggerated his exploits. One journalism student put it this way: "Yuan was the chosen one to be a god in the advertisements that fit the state's agenda, even upon his death." At least seven people have been arrested in the past 10 days for insulting Yuan's reputation . 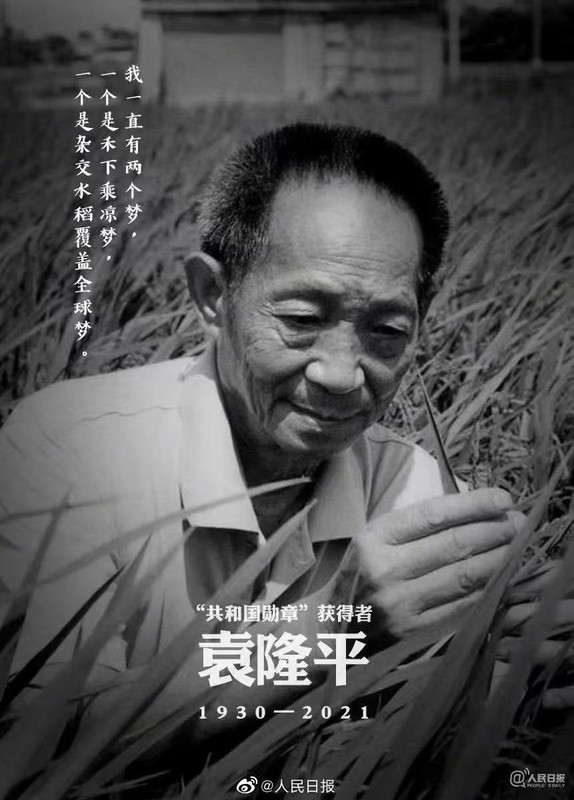 Whether the soft-spoken scientist was happy about being constructed as a myth himself is unknown. Still, it is worth noting that he never joined the Communist Party, unlike many prominent Chinese elites of his time. Yuan was also nearly prosecuted for his family background, as well as for criticizing Mao's guidelines on agricultural production during the Cultural Revolution. In a 2009 interview, he described how "the Great Leap Forward (1958-1962) caused tens of millions of death from hunger," a man-made mistake by the Communist Party; not to mention his own testimony from the 1960s of how seeing corpses of those who had starved to death had triggered him to study rice production.

Neither party stalwart nor dissident.

Regardless, the Party's official obituary last week did all it could to claim him for its own: "Comrade Yuan Longping is an outstanding representative of non-partisans and a close friend of the Communist Party of China. He maintains a high degree of ideological and political action with the Communist Party of China with Comrade Xi Jinping at its core." It was unusual to address Yuan as "comrade," since he'd never joined the party — but the move can be seen as a final chance to use his grand commemoration to shape the collective memory for the Chinese public.

But what was perhaps even more significant was the way his death crossed the usual lines of Chinese history and society. On the day of the funeral, tens of thousands queued for hours in front of the mourning parlor in Changsha, with oceans of white flowers piled up alongside the streets. Elderly, middle-aged civilians and young people showed up to mourn for this beloved scientist.

Jing Li, a 24-year-old Changsha resident, could only visit the funeral parlor hours after the ceremony was finished on May 24, but she still witnessed thousands of civilians heading over towards the site. "We, millennials, never experienced hunger — but we learned about Yuan's good deeds throughout our education," said Jing. "Even though I have never met him in real life, his humble manner made me feel very close to him."

Being a figure who was neither party stalwart nor dissident, Yuan's life largely mirrored millions of other Chinese who do their jobs and raise their families outside the realm of political ideology. With his death, the Communist party tried its hardest to put its stamp on the collective memory of his work and life. But for a new generation, the narrative of that memory unfolds differently now — in real-time and online.

Inside The Himalayan Hideaway Of Chinese Bitcoin Mines

In remote — sometimes unmapped — regions of China, thousands of computers are "mining" bi...