Across the globe, mafia syndicates, white-collar criminals, hackers and scammers are finding novel ways to profit from the ongoing health crisis.

Nothing will be the same as before. For everyone, the pandemic is disrupting lives. But for a few, it also offers an opportunity for profit.

This new criminal market has sprung up to siphon earnings off the virus, and it is spreading just as quickly as COVID-19. With the urgent necessities of this health emergency, mob bosses and entrepreneurs have teamed up, leading to a mutation of our idea of "criminal association" that knows no boundaries.

China, South Africa, the Emirates, Russia, the Americas and Europe are intertwined in a network in which the only thing that matters is the ability to quickly solve problems. Indeed, since March 2020, mafia families with decades of experience in import-export processes on their CVs, together with unscrupulous white-collar workers, have converted their businesses and explored new opportunities.

In the end, it's all a question of logistics — finding what's missing and getting it where it's needed, no matter the cost. It's the same workflow in any criminal market, including drug trafficking, except this time the products are different.

In the first wave, it was masks, gowns, test tubes, gloves, disinfectants, respirators and oxygen cylinders. And the prices soared — by 1,000% in the span of just two weeks. Then, as the crisis continued, new speculations emerged.

Since the lockdown forced the use of the internet for nearly everything, computer frauds became commonplace from daily shopping to the public registry's office. There were also scams on financial relief allocated families and companies in difficulty. Now, the big money maker is the vaccine. Pure liquid gold. So precious, in fact, that "warehouses and shipments are at risk of (armed) robbery," warns Interpol chief Juergen Stock.

This is not just another one of Italy's flaws, but a worldwide trend: The race for profits in the underworld is the same from Germany to Brazil. The first comprehensive analysis of the criminal atlas in the pandemic was carried out by the Financial Action Task Force, the leading body for fighting money laundering.

Fraud, swindling of supplies, and false certificates of conformity have generated staggering amounts of money.

Overwhelmed health systems have triggered a race to find treatments, drugs, protective clothing — by any means necessary. That left the door wide open for illegal activity, even at the very outset. Back in January 2020, the world had not yet realized the danger of COVID-19. But in China, an announcement appeared: "We have large quantities of surgical masks and disinfectants available." A few weeks later, more than $180,000 had arrived in three Hong Kong bank accounts and then disappeared forever, just like the PPE.

The virus spreads quickly and crime learns to adapt. Less than two months later, German health authorities fell into the hands of the bandits. They needed 15 million euros worth of masks and were looking to buy from companies in Zurich and Hamburg. Unable to meet demand, they ordered through a Spanish company that, on its website, claimed to have 10 million in stock.

Only after a whirlwind that bounced money from an Irish dealer to a Dutch company, did Germany realize the trick. The website was fake and half a million euros had already been sent to Nigeria. For the clans and the professionals who offer their services, all that protects us is transformed into business. Masks imported with customs documents that seem valid turn out to be forged. Others offer their improvised document certificate services to put on any stamp on anything in exchange for money.

To deal with the emergency, the Italian government chose to proceed by way of derogation, resulting in the Rome Public Prosecutor's Office opening an inquiry into a 1.25-billion euro order with three Chinese consortia and as much as 70 million euros in commissions that ended up in the pockets of Italian "entrepreneurs."

Fraud, swindling of supplies, and false certificates of conformity have generated staggering amounts of money. In Brazil, more than 300 million euros between April and November last year alone. Even in Germany, the raid has highlighted the criminal underworld's political connections, making the governing Christian Democratic Union party tremble in fear.

Now, a year later, commercial outlets for obtaining the vaccine are multiplying in the shadows. There is smuggling, or rather "parallel sales," with free zones where European, Russian or Chinese antidotes change the destination. Or in the Philippines, Chinese gambling businesses have received Sinopharm injections, despite the fact that the authorities in Manila have not approved their use. Prices jumped from $30 to $300. In Ukraine, police recently discovered the trafficking of 3,000 euros per dose.

Analysts point out similarities between the prices of vaccines and those of drugs: All it takes is for the wholesalers to announce a delay and the prices skyrocket. Are multinationals signaling that they cannot meet the deadlines as agreed upon with the EU? Here come the proposals from "subcontractors." In the last few weeks alone, the Czech Republic has received two offers from sellers in the United Arab Emirates ready to distribute vaccines produced in India, as well as those from AstraZeneca.

These cases are not isolated. In fact, OLAF, the European Anti-Fraud Office, has reported the movement of 1 million doses on the "parallel market," putting EU governments at risk of 14 billion euros in fraud. The offers often come from companies based in non-EU countries, created solely for these operations. In some cases they are clearly scams: They ask for payment in advance and disappear with the money, making it almost impossible to trace the perpetrators.

There is also the bazaar of fake vaccines. Counterfeit doses have been seized by Interpol in South Africa and China, but others could land in online pharmacies. Quack doctors are in on the action too, with fake test kits, remedies on digital networks and miracle COVID-19 cures from oregano to cow feces. 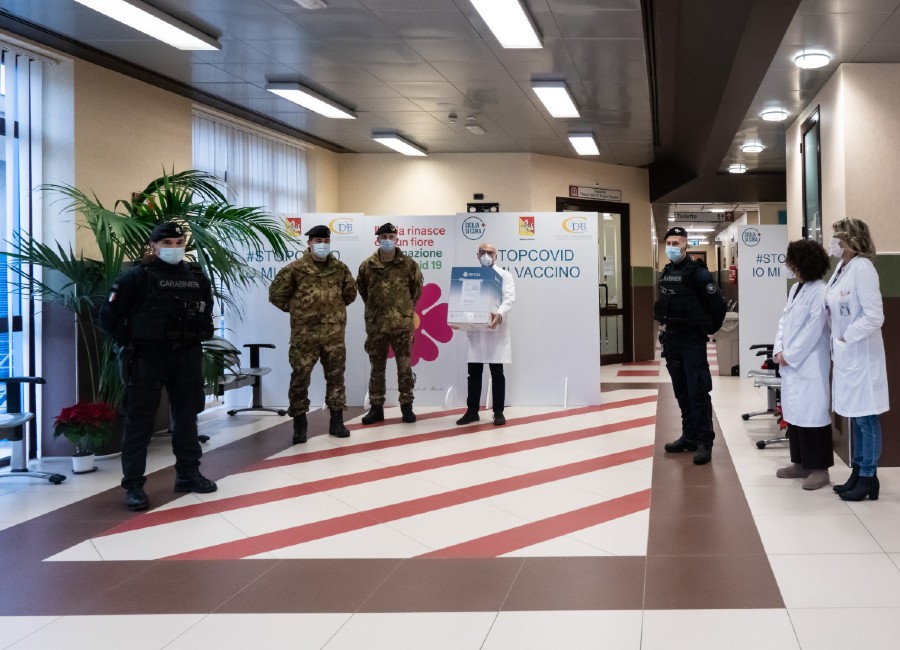 In addition to trade, the pandemic has made mature the illicit activities that were previously only experimental. Hacking has become mainstream, with varying levels of professionalism. Every piece of information about vaccines and treatments has taken on a strategic value. The most evil of hackers try to steal vaccine formulas through cyber attacks on laboratories, hospitals and research centers.

But these raids are only the tip of the iceberg in the digital evolution of lockdown crime, sure to stay. Around the world, these groups act without borders, stealing personal data, penetrating bank accounts, and manipulating credit cards. They break the trust of those who are not internet experts with a million different tricks. There are fake banks, for example, offering links for economic relief and loans with state guarantees. Once an individual takes the bait, they clean out the account. And for businesses, instead, they paralyze servers and block the data until a ransom has been paid.

In the GAFI dossier (Financial Action Task Force on Money Laundering), one can see the beginning of a new era where the mafia can count on economic resources and flexibility, but above all one sees their alliances with political mediators and bourgeois professionals, forming a compact transnational block.

The routes for smuggling masks have become the preferred investment channel in activities warped by the crisis — investing in hotels, restaurants, real estate, companies everywhere and moving cash across continents. According to Cerved, an agency providing credit risk management and analysis services, one in five Italian companies is at risk of loans sharking, and in some provinces in the south, such as Naples and Catania, thousands of companies have already changed ownership.

During the pandemic, mafia groups have sought to be seen as a source of welfare.

GAFI warns: "Rising unemployment, financial difficulties and the bankruptcy of companies represent vulnerabilities for criminals to exploit more and more."

During the pandemic (and as history shows with other crises too), mafia groups have sought to be seen as a source of welfare: from distributing food parcels to enforcing lockdowns.

"Criminal groups are in search of a valuable and intangible commodity: legitimacy based on social consensus. They pose as governing entities, offering protection in contexts where the state has denied that COVID-19 was a problem, such as in Brazil, or where protecting the weak does not come quickly. As a result, the governance of communities by mafias has grown, and this is an effect of the virus that in some contexts, such as in Latin America, will not end soon once the pandemic is over.

"Italy must pay attention too," says Federico Varese, professor of criminology at Oxford University. He warns that mutations, with regards to computer crimes, will continue after COVID-19. "It is necessary that web giants are considered providers of essential services," Varese adds. "They must introduce a measure of public control. Banks that do not report suspicious transactions must be sanctioned."

The latest sector targeted in the COVID-19 context is public financing. It's sufficient enough to just hire front men or take over failed companies to pocket the subsidies and disappear. In Lombardy, in Italy's north, criminals affiliated with the Calabrian mafia (‘Ndrangheta) have scored riches by using false invoices to justify non-existent income. What's legal and what's illegal become intertwined in order to be sure that criminals can grab subsidies within the gray zone, often ready to offer their services.

In Spain, last April, a criminal organization took over 50 companies on the verge of bankruptcy just to obtain government relief. In Washington state last July, a man was accused of filing false tax returns on behalf of six different companies to obtain more than $5 million. On paper, one of the six companies boasted dozens of employees and wage and tax payments in the millions, but in reality, he bought it a few months earlier over the internet and was inactive.

In Switzerland, in the meantime, a financial institution granted a loan of 90,000 Swiss francs to a phantom construction company that had already played the same scheme with another bank. These numerous episodes mark a global evolution with unpredictable outcomes. Around the world, many fear that this mutation in crime will not disappear alongside the pandemic. On the contrary, it could become the new model of mafia business, increasingly inserted in an economy that's been greatly compromised by virus.

ABOUT THE SOURCE
All rights reserved © Worldcrunch - in partnership with L'ESPRESSO

ROME — A deep dive into Italian anti-vaxxer social media groups leaves me stunned. For them, ...