Sanctions have shrunk Islamic Iran's regional and nuclear ambitions, but it retains a trump card in current talks with the Powers: the determination of the Western camp to appease its regime in return for a bit of peace

There are conflicting reports on the state of talks in Vienna between Tehran and Western powers on reviving the pact to keep Iran's nuclear program in check. The International Atomic Energy Agency (IAEA) fears that if talks carry on through May, at the end of its agreement with Iran on inspections, it will be unable to verify ongoing activities at Iranian installations.

The current negotiations follow the decision by the Donald Trump Administration in 2018 to pull out of the breakthrough agreement in 2015. Timing is crucial, and France's ambassador to Iran recently told the Tehran-based newspaper Kar-va-Kargar that Western powers wanted the pact fully revived before Iran's presidential elections, scheduled for late June.

It's undeniable that an international current is mobilizing in line with the Islamic Republic's interests, and is determined to work with Foreign Minister Javad Zarif's team to revive the pact with approval from Iran's Supreme Leader, Ali Khamenei. This despite the fact that states are aware of the nuclear threat posed by the clerical regime and its Revolutionary Guards. They know the regime has been sending arms and money to regional terrorists and militias. Prominent Western media and Persian-language outlets based abroad promote and echo the lobby's collaborationist positions.

German intelligence officials observed in 2020 that Iran was in contact with German firms in its bid to access nuclear-related know-how and equipment. Iran's security agencies were also spying on and restricting exiled opponents in Germany and elsewhere, they stated. Swedish security agencies backed that report with similar findings on Iran.

For decades now, Western powers have known of the regime's pernicious activities abroad and rights violations inside Iran, but persist in their efforts to find an agreement with it. The FDD, a rights and democracy think-tank, believes Germany's Chancellor Angela Merkel is giving priority to trade over the security warnings given about Tehran's rulers. 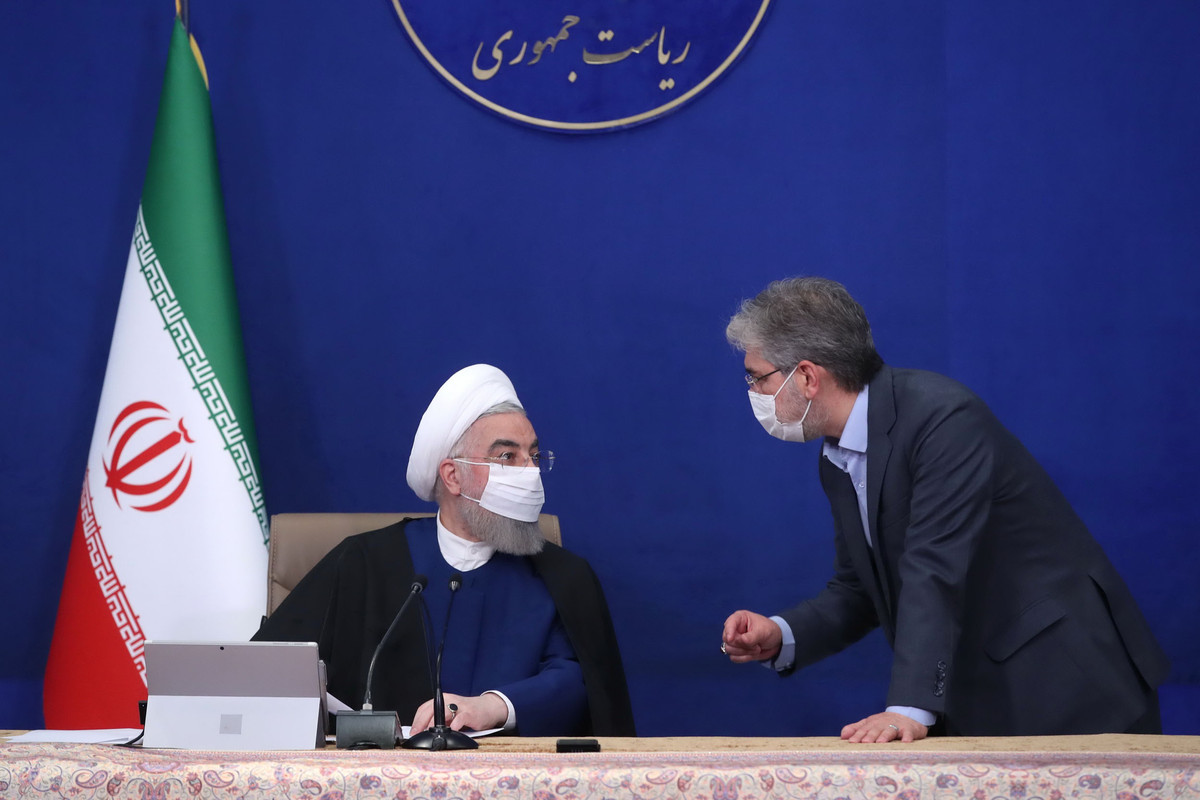 Iranian President Hassan Rouhani speaks during a meeting on talks in Vienna and nuclear deal in Tehran, Iran on April 20, 2021 — Photo : Iranian Presidency

The presence in Vienna of [the Iranian deputy-foreign minister] Abbas Araqchi for indirect talks with the United States, confirms Khamenei's approval. Khamenei had already said officials should not "wait so much as an hour" to have sanctions on Iran lifted, though stressing that talks with the West must be "honorable." He believes a piecemeal removal of sanctions will not help the regime, and wants them lifted altogether if Iran is to resume its commitments in the nuclear pact. Western powers have yet to agree to his conditions and rather want a pact to include Iran's ballistic and regional activities.

The Islamic Republic is mired in an economic crisis and sees the removal of oil and banking sanctions as vital. Against a background of mounting discontent, the regime wants sanctions removed almost immediately. But there are some with close relations to the Iranian military who like to accuse the diplomats of succumbing to the West and harming national interests. While the diplomats negotiate with Khamenei's backing, they lambast the government and deride talks — also with Khamenei's backing! It is a phony war that has lasted through several Iranian governments, or a theater whose cast refuses to abandon the stage — season after season — until one of the actors dies or is struck down!

Iran's regime may feel its only option is to intensify its blustering.

Opponents of a pact in Iran appear to be several powerful groups, including those who do not want President Hassan Rouhani and his reformist allies to be the protagonists of talks with the West, like former Revolutionary Guards to Commander Mohsen Rezai who do not oppose talks with the U.S., but emphasize the Leader's condition on sanctions. Others insist at least one member of Parliament must attend the talks. One legislator reputedly close to the Guards, Mojtaba Zolnuri, head of the parliamentary National Security Commission, says "I claim and I can back my claim, that Rouhani and his followers want sanctions to stay, and are working to prevent their removal."

Hossein Dehqan, a military affairs adviser to Khamenei, insists the United States must recognize the Islamic regime, provide "guarantees" for its survival and stop meddling with its regional policies. This sector supports its ideas with a single big idea: using military force to push foreign policy goals. Iran's regime may feel its only option is to intensify its blustering and threaten the United States and its regional allies with rockets and proxy militias. This may win immediate concessions, but such tactics will bring it bigger problems down the line.

But ultimately, Tehran's negotiators will have to yield in Vienna. If the Biden administration and European powers stand firm on ending Iran's ballistic strikes and backing for militias, its officials must either give in or face a military response. They may of course feign acceptance to buy themselves time; for this regime has shown that pact or no pact, it will not abandon its plans. Are we returning to the cat-and-mouse games of the 1990s and 2000s? Or will the West stop playing? Can it ignore the clear warnings from Israel that it will act alone in the face of threats?