A Year After Killing Of Iranian General: Revenge Or Weakness?

At a ceremony in Kerman, Iran, that marked the first anniversary of the killing of commander Qasem Soleimani - Ahmad Halabisaz/Xinhua via ZUMA Press

The Iranian regime's plans to be the power broker in three Middle Eastern states have withered since the United States killed its key regional operative Qasem Soleimani.

For the Islamic Republic of Iran, 2020 began on January 3 with the killing by the United States of one of its top generals, Qasem Soleimani, and several of his associates including Abu Mahdi al-Muhandis, head of an Iraqi militia allied to Tehran. Soleimani, who headed the Iranian Revolutionary guards' international Quds force, was targeted by a drone missile outside Baghdad airport.

The elimination of this key agent of Iranian ambitions in the Middle East has proven to be a crucial blow to the Islamic Republic. Because it was Soleimani, not Iran's government or foreign ministry, who forged and implemented its regional plans. The Islamic Republic uses terms like Axis of Resistance or Strategic Depth in relation to its regional policies, though in plain terms, they consist not of investments or diplomatic maneuvers but in spreading anarchy and war.

[CBS News reported early Wednesday that air traffic controllers in New York had heard a chilling threat on the anniversary of the General's death vowing revenge: "We are flying a plane into the Capitol on Wednesday. Soleimani will be avenged." U.S. officials are investigating the report, which CBS says was heard by several air traffic controllers.]

The Islamic Republic sought before, but especially after, Soleimani's death, to carve a hero out of him. He was to become a symbol of religious nationalism. It has even fooled some regime critics into hailing the man as a "national general" or comparing him to seminal figures of Iran's constitutional revolution in 1905. His regional adventurism and terrorist activities were thus redefined as efforts to safeguard Iran's security and territorial integrity. But as time has shown, they have merely brought Iran instability. Had he stayed alive and if the regime were to fall, he would be hauled before an international court for war crimes and crimes against humanity including sending Afghan children to fight in Syria.

Iran continues to feverishly threaten reprisals for the killing.

Iran has meanwhile laid out more than 16,000 programs and "spontaneous gatherings" to mark his death, according to the head of the Qasem Soleimani Headquarters in Iran, Hossein Amir'abdollahian. The official says the late general would visit friends or subordinates in their dreams to "lay out" plans for operations against Israel. This isn't the only such piece of absurdity or superstition concerning Soleimani, reported in Iranian media these days.

Like a year ago, Iran continues to feverishly threaten reprisals for the killing. But needless to say, someone from the "Axis of Resistance" in the Middle East will have to actually follow through on the threats. The Judiciary chief Ebrahim Ra'isi, says the Resistance Front is determined to avenge his death and "the enemy shouldn't imagine that the perpetrator or author of the murder is safe just for being the American president." Soleimani's successor as head of the Quds force, Esma'il Qaani, has also said that "any man you'd find anywhere in the world is ready to punish the cowards for what they have done."

There has been no vengeance so far, despite the hue and cry. The regime may have been deterred by the presence of U.S. warships, bombers and submarines in the Persian Gulf. The head of the Israeli General Staff General Aviv Kochavi has also warned, in unusually firm terms, that Israel would attack any country acting directly or otherwise against Israel.

The head of Centcom, the U.S. operations chief in the Middle East, General Kenneth F. McKenzie, has in turn warned that the United States was ready to respond to any attack on U.S. interests or American lives. These warnings appear to have had an effect on Tehran. Its Foreign Ministry Spokesman Sa'id Khatibzadeh has said Iran had contacted the United States by various means, "to say we are not seeking tensions." 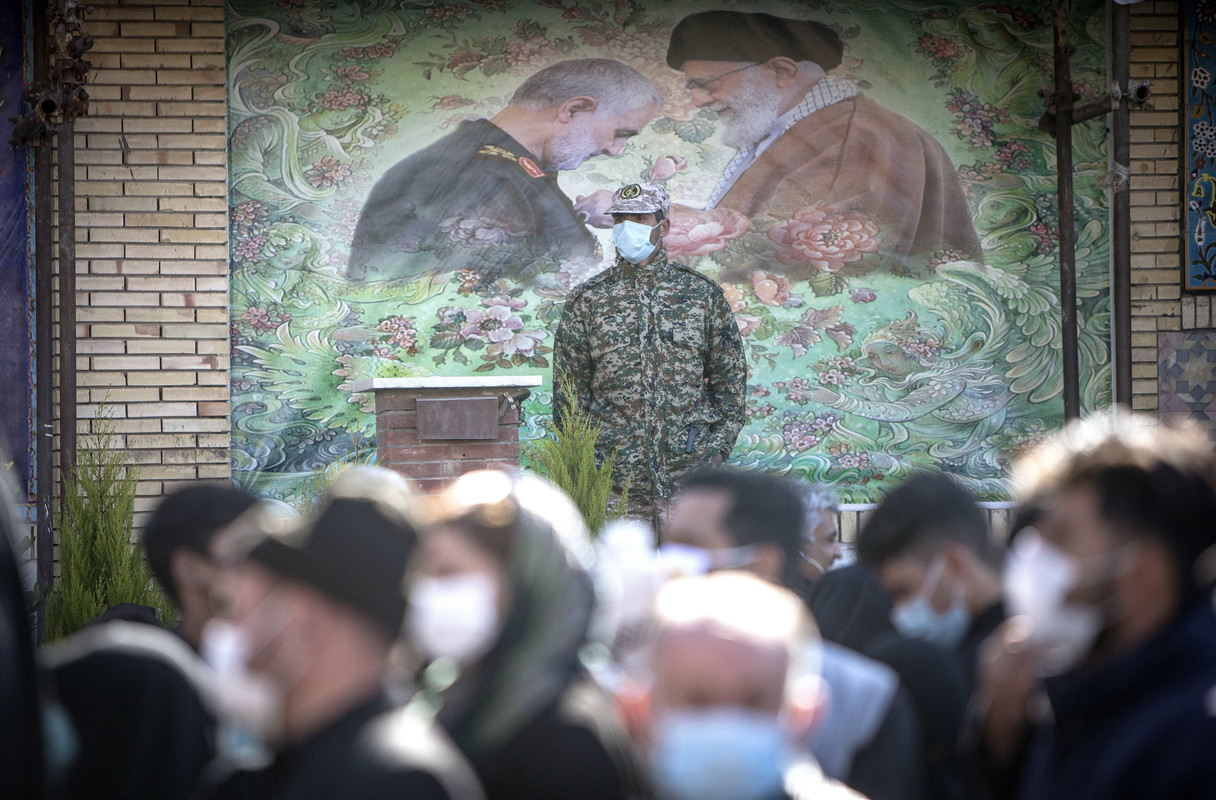 An Iranian soldier stands guard near the grave of Qasem Soleimani in Kerman, Iran — Photo: Ahmad Halabisaz/Xinhua via ZUMA Press

A year after Soleimani's death, Iran's influence in regional states has also sharply declined. His elimination was undoubtedly a cause among potential allies, but his successor Qaani lacks charisma and falls short on knowledge of regional affairs and personal relations with Iraqi militia chiefs. If we add the impact of U.S. sanctions on Iran's public coffers, and protests in Iraq and Lebanon against Iranian interventions, the decline is clearer.

Lebanese analyst Bashar el-Halabi discerns a new chapter in regional developments, already begun in October 2019 with the street protests of Lebanese and Iraqis. He believes that while such protests have been against official corruption, it is fair to consider them as targeting the influence of the Islamic Republic, which he deems to be the "real patron" of corrupt politicians in both countries.

In Lebanon, three prominent politicians want the country's president, the Iran-approved Michel Aoun, to resign. They include Samir Geagea, head of the Christian Lebanese Forces who wants early legislative elections and Suleiman Frangieh, another Christian leader who has advised Aoun's friends to "advise him" to step down. Druze leader Walid Jumblatt also says Aoun and his "domestic and foreign backers" (meaning Hezbollah and Iran) have "failed and must step aside."

Iraq's Prime Minister Mustafa al-Kadhimi in turn recently sent an envoy to Tehran, with another message on the need to keep its proxy forces in check and avoid any untoward move that could cause a calamity in Iraq.

In Syria, besides repeated Israeli attacks on positions held by the Revolutionary guards and affiliated groups, Iran is effectively excluded from three-way talks to end the civil war there. Only the foreign ministers of Turkey and Russia were present at two recent meetings held in Sochi in Russia, and nobody from Iran was invited.

Iranian nurses are overworked and underpaid, and now angered by the government's seeming reluctan...

Iran Really Has Only One Option: Return To Talks With The West

Iranian officials have reacted cautiously to a string of strikes, killings and acts of sabotage a...