BIR AL-ABED — "For 20 minutes, they kept firing at us. We couldn't hear anything else because of the sounds of the gunfire. Everybody was running. Some were trying to escape and others were looking for their children — no one was spared, young or old. When [the militants] were done firing, one of them said: ‘This is what happens to those who antagonize the mujahideen.'"

These are the words of Magdy Rizk, a resident of Rawda village. Rizk was at the Rawda mosque when militants opened fire at people praying inside on Friday, Nov. 24. He is now hospitalized at a hospital in nearby Ismaila. And though he was shot three times in the legs, he was spared the fate of the 305 people who died in the attack. Among them, his own son.

Rizk teaches mathematics in a primary school in Bir al-Abed, the closest city to Rawda, where the attack took place. He is from the Nile Delta city of Beheira but moved to the Sinai for work in 1991, which he says was a personal choice. He brought his wife along, and in the Sinai they raised three boys — the eldest of whom was the one they lost on Friday.

"On Friday, I went to pray in the mosque with my three sons. Seven minutes into the sermon, we heard the sound of gunfire outside. They then entered the mosque and opened fire on us, without discriminating. They were about 10, maybe more. They wore military attire, with their faces masked, and they were carrying a black flag. They fired for 20 minutes or more. When they spotted someone moving, they fired at them. My older son is a martyr. He had just finished studying at a technical healthcare school in Ismailia and was waiting to be employed ... He's in a better place now," Rizk says, from his hospital bed.

These people ran away from death, were displaced — only to come and find death.

"There was no way to talk to them," Rizk says. "They didn't come to talk. They came to kill because they think we are infidels. They say the mosque belongs to a Sufi order, but what I know is that it belongs to the Ministry of Endowments. Also, not all the village residents follow Sufism."

According to Rizk, it took ambulances half an hour to reach the mosque area after the attack, most likely because militants were firing at anyone trying to come to provide help. They had also set up barriers to keep cars at bay.

A man, who asked to be called Abu Salma, was coming to visit an injured relative in the hospital. Despite attempts by security to prevent journalists from speaking to Rawda residents, he told Mada Masr about the mosque's relation to the Jaririya Sufi order: "These people think that they are fighting the Sufi order, but not everyone at the mosque followed the order. Seventy percent of the mosque's attendants don't follow it, and 70% of those injured are people displaced from Sheikh Zuwayed and Rafah," he says, referring to the internal displacement within the Sinai in the wake of a heightened conflict between Islamist militants and military forces.

"These people," Rizk says of those displaced from the Sinai cities, "ran away from death, were displaced — only to come and find death."

Islamic State-affiliated Sinai Province militants instructed Rawda villagers last week to stop performing Sufi rituals near the mosque, according to a source in the village who spoke to Mada Masr on condition of anonymity. No group has claimed responsibility for Friday's attack. 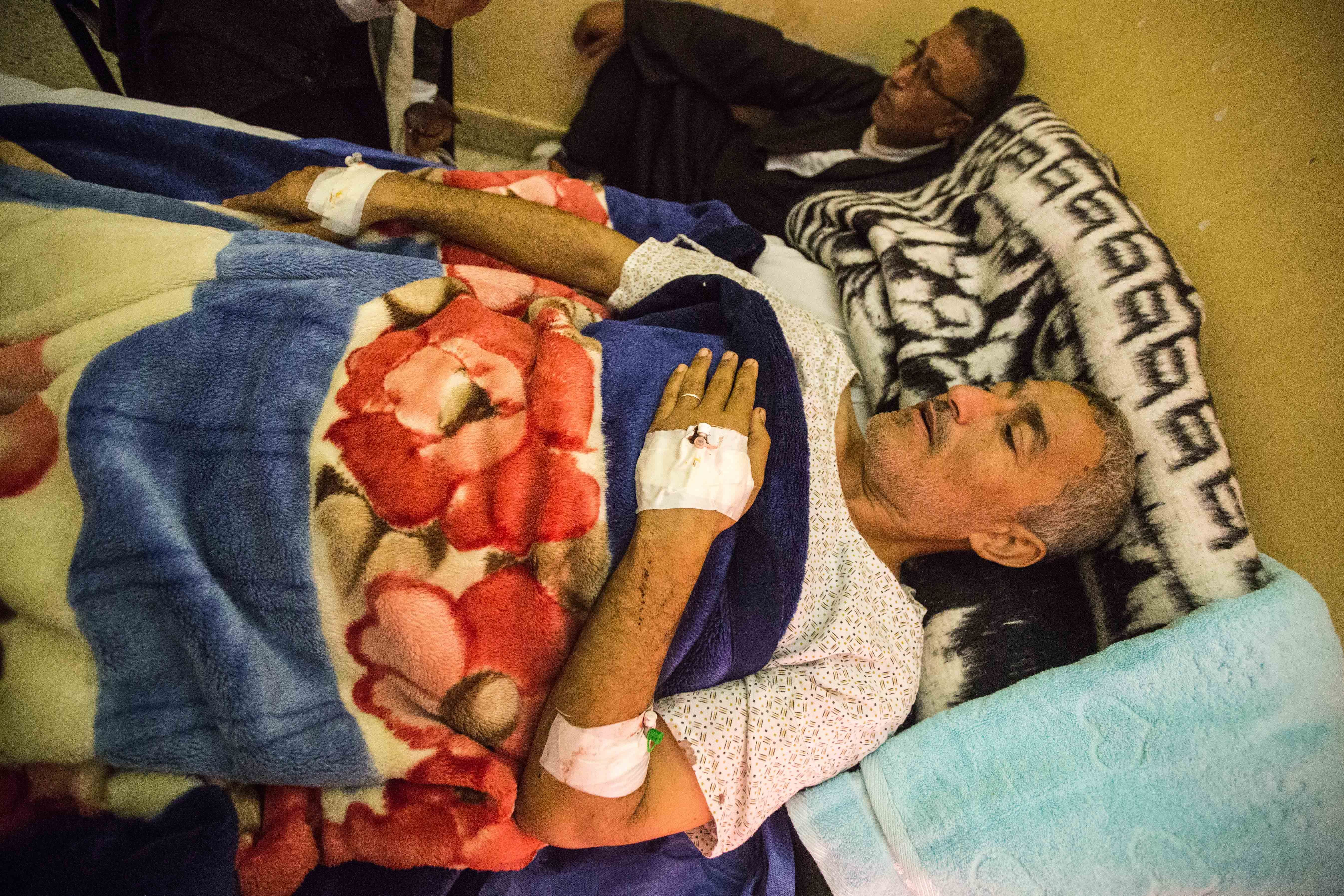 Rizk recounts waking up on a morning, over a year ago, and finding sand barriers blocking the streets of the village. When the residents asked security forces about the barriers, they were told that there was a threat of terrorist attacks. The same measure was taken several times over the following year. There were sand barriers around the mosque that was attacked on Friday at some point as well, he says.

Still, Rizk says he wants to go back to the village the moment he is discharged. He says that, if he dies, he wants to be buried next to his son in the village.

"No one should speak of evicting us from our land. I am against the evacuation of the Sinai. If people leave the Sinai, the terrorists will leave with them. Who will secure our houses, if we leave them?" Rizk asks, with anger in his voice.

Rizk also urges the Coptic Christians, who were forcibly displaced from Arish in February 2017 amid threats and targeted attacks from Sinai Province, to return to the Sinai to defend their land.

He remembers Mariam, a colleague who taught English, but who has since moved to Ismailia.

If people leave the Sinai, the terrorists will leave with them.

"We were so happy to get an English teacher finally. She would come all the way from Arish every day — a 45-kilometer commute. But a decision was made that Christian teachers who left are now on an 'open holiday.' She transferred to Ismailia, and her salary is still sent to her every month from the school. In the attendance sheet, next to her name, we draw a dash, and write: Christian sister displaced to Ismailia."

One of the frustrating things for Rizk is how the Sinai is covered in the media, and how the children of the Sinai are casually accused of collaborating with militants. He speaks of the belief that Bedouin people are inherently traitors. "I have lived here since 1991 and always felt safe. It is easy to talk about betrayal, but it is a harmful word for many people here." He also argues that such widespread accusations deter people from aligning themselves with the state in its fight against militants.

It should be noted that it was very difficult for Mada Masr to have access to speak to Rizk, with security actively preventing journalists from reaching out to the injured. Plain-clothes police officers were stationed in the hospital corridors and at the doors of injured residents' rooms. They asked all visitors to provide identification, as well as the reason for their presence in the hospital. When journalists managed to enter a patient's room, a police officer would follow and ask them to leave.

Khaled Megahed, the Health Ministry spokesperson, said that the ministry had issued a directive to prevent media from speaking with the injured, without offering any explanation for the restriction.