In-person classes have resumed in Chile after more than a year of virtual lessons. - Matias Basualdo/ZUMA Wire
WORLDCRUNCH
2020-03-02

Welcome to Tuesday, as COVID cases worldwide rise for the first time in seven weeks, a former French president is convicted of corruption and Chile goes back to school thanks in part to its extra efficient vaccine program. Meanwhile, La Stampa visits the northern Italian region of Lombardy, which is living through a grim coronavirus deja vu.

• COVID-19 latest: Global cases are rising for the first time in seven weeks. A new study shows that the P.1 variant first discovered in Brazil can infect people who already recovered from the virus. The Phillipines reports the first cases of the South African variant. Meanwhile, the EU has announced a vaccine passport scheme to reboot summer tourism, while France becomes the first country to endorse a single vaccine dose for people who have already recovered from COVID.

• Sarkozy convicted: Former French President Nicolas Sarkozy has been convicted of trying to bribe a judge in 2014 and sentenced to three years in jail for corruption. Sarkozy

• Two Americans extradited over Nissan chief: An American father and son have been extradited to Japan, accused of helping carry out the daring escape of former Nissan chief Carlos Ghosn, charged with concealing millions of dollars of income from Japanese regulators.

• Nigerian schoolgirls freed: The 279 secondary school students kidnapped and held for ransom on 26 February, have been released.

• Child in Sri Lanka dies in exorcism: Police in Sri Lanka say a nine-year-old girl has been beaten to death with a cane during a ritual to drive an evil spirit away. Two women, including the girl's mother, have been arrested.

• Missing bird reappears after 170 years: A mysterious Indonesian black-browed babbler, from a species believed to be extinct, has been spotted for the first time in 170 years. 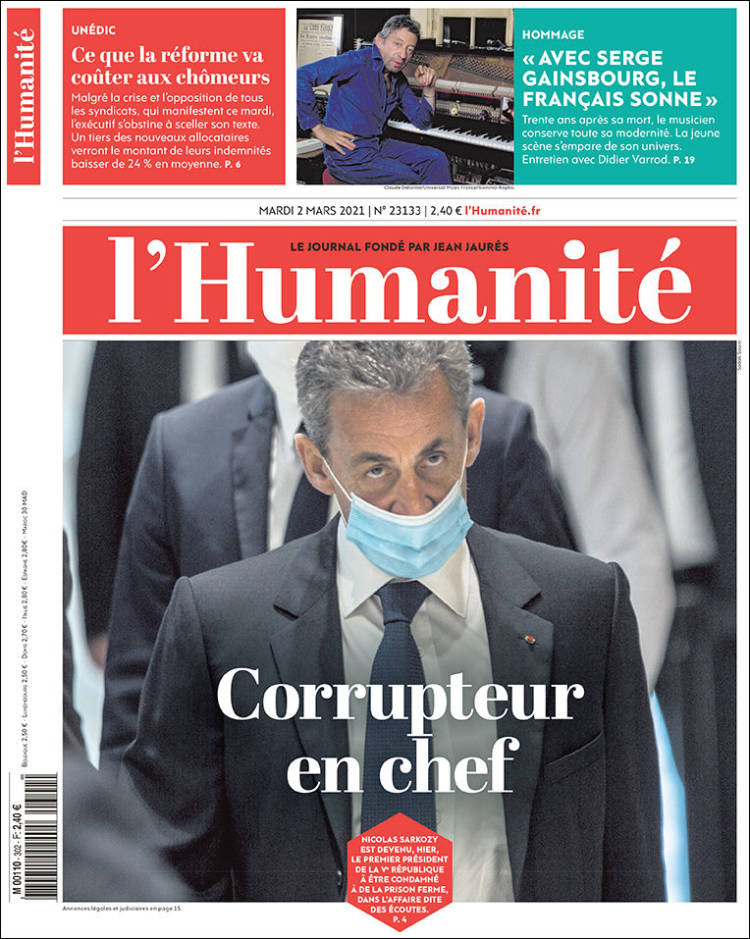 Locals can't tell whether it's a second or third wave ... or just a continuation of the first wave when Northern Italy was the West's first epicenter of the coronavirus, reports Chiara Baldi in Italian daily La Stampa.

By last week, at the Chiari hospital in the northern Italian region of Lombardy, scenes were eerily reminiscent of one year ago. Once again, this is the area of Italy where the virus is accelerating the quickest, all the way up to the city of Brescia. "Nothing has changed in one year. Nothing has been learned," says Valentina Bergo, a council member for education at the municipality of Rovato, a town of about 19,000 on the border between the provinces of Bergamo and Brescia. "We are still at square one, putting towns under lockdown and telling people they can't go on with their lives."

For weeks, the data has not offered much hope in the biggest province in Lombardy, and the most populated after Milan, with more than 1.2 million people in more than 200 towns. The province had more than 20,000 new infections since the start of the year — 506 in the last 24 hours before Feb. 24, and an average of some 378 per day. But the data doesn't tell the whole story: on top of the rising numbers, here and in other towns around Bergamo, the new coronavirus variants are everywhere.

Others are saying this part of Lombardy is facing a third wave. But for Mauro Borelli, a general manager of public health service in the region, more than a third wave, "this is a first wave that never really ended," he says. "In a year, local hospitals never went down to less than 40 hospitalized patients. The specialized Covid wards were never closed."

In Mexico, those accidents waiting to happen

For drivers in Mexico, the rule of thumb for traffic accidents is simple: el que pega, paga! In other words, the perpetrator of a crash — i.e. the incoming vehicle — pays.

In a country where many are uninsured, that kind of unspoken understanding makes sense. But the pega-paga approach has also created an opportunity for scammers to pocket some ill-gained pesos through a practice known as montachoques or chocachoca, the operative word being choque, Spanish for "crash."

An extortion technique being used increasingly in Mexico City, it involves provoking an accident by halting a car on a busy highway, then demanding compensation from the person who crashed in from behind. When victims are reluctant to pay, they are threatened and sometimes even attacked, a senior police official in the eastern sector of the city recently told the Milenio newspaper.

The official, Luis Martínez Rodríguez, described a typical maneuver as overtaking a car, then suddenly slamming the breaks to provoke a crash. The "injured party" then steps out, sometimes with companions, and demands compensation, with sums ranging from the equivalent of around $70 euros to $1,500.

Two or even three cars may be involved to ensure the victim is trapped into the situation. In one case the driver filmed the "repeated crashes" into his car, calling it an "attempted homicide." Police have identified the city's main ring roads as a choice location for this crime, usually undertaken outside rush hours, to allow maneuvering.

Chinese investment in Australia plunged by 61% in 2020, according to the Australian National University. New data recorded just more than $1 billion of Chinese investment in Australia last year, down from $2.6 billion in 2019. The drop had already begun in 2019, but the economic relations between the two countries worsened in 2020 after China's threats of a consumer boycott following Australia's call for an overhaul of the World Health Organisation in the wake of the outbreak of COVID-19 in the Chinese city of Wuhan.

Some of my more fanatical friends are still upset, they have not accepted my choice.

— In an interview for Italian newspaper Corriere della Sera, former Pope Benedict explains how his 2013 resignation — a first in modern times for a pontiff — was not accepted among the most conservative members of the Catholic Church who have insinuated that he was forced out in favor of the more progressive Pope Francis.