Bulgarians celebrated its National Day, which marked the 143rd anniversary of the country's liberation from five centuries of Ottoman rule - Denislav Stoychev/NurPhoto via ZUMA Press
WORLDCRUNCH
2020-03-04

• COVID-19 latest: Indian Bharat Biotech's COVAXIN shows 81% efficacy. In Germany Chancellor Angela Merkel reveals a five-step plan for easing restrictions, while France lifts its ban on AstraZeneca vaccine to be given to 65+. Police in China and South Africa seize thousands of counterfeit Covid vaccines. And a new report shows that mortality rates are higher in countries where more people are obese.

• Myanmar coup: The United Nations reports at least 38 people were killed yesterday in the deadliest day since coup began.

• U.S. Police uncover ‘possible plot' by militia: Nearly two months after the insurrection, Capitol police uncover intelligence on a possible plot to breach the U.S. Capitol today. The threat appears to be connected to a QAnon conspiracy theory that Trump will rise again to power on March 4.

• Sweden attack: A man in the southern Swedish city of Vetlanda injured eight people in an axe attack that police are investigating as a possible terrorist act.

• Platypus refuge: In light of recent droughts and wildfires which have devastated the animal's habitat, an Australian zoo will set up the world's first platypus sanctuary. 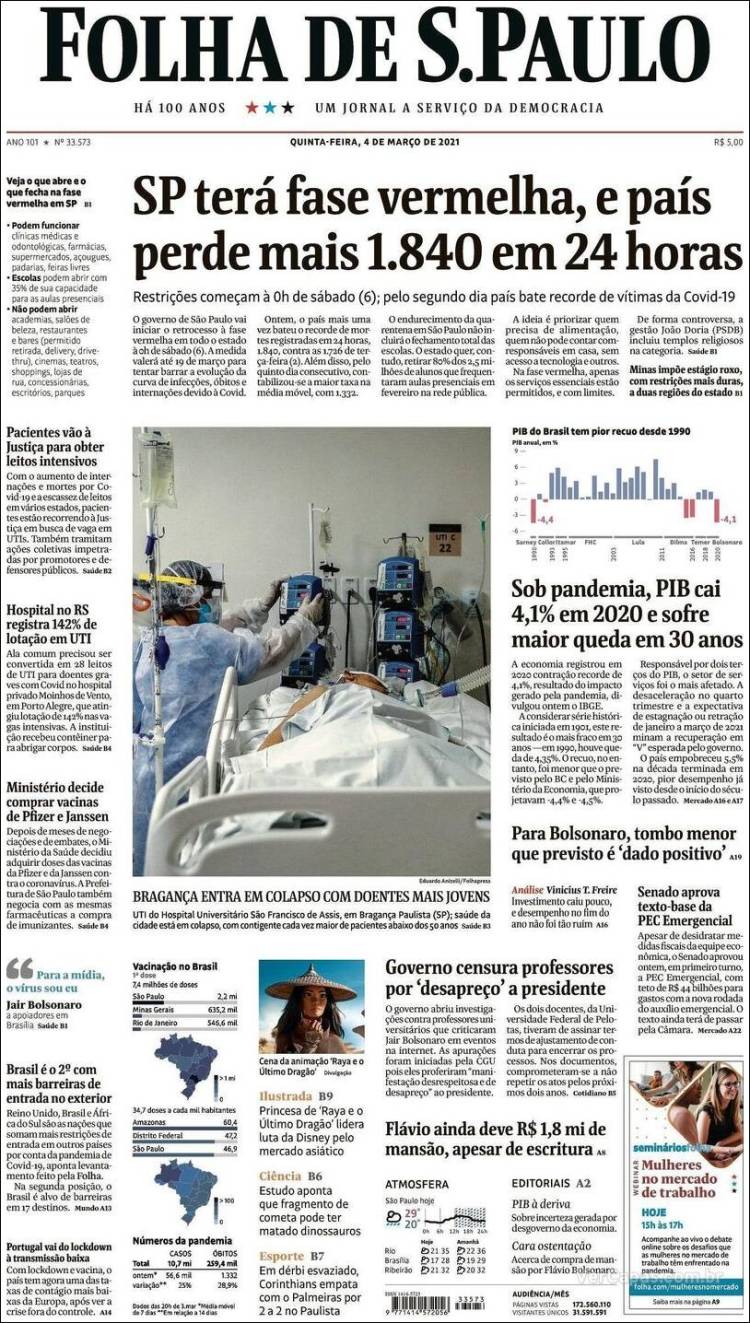 "The country loses 1,840 more in 24 hours," titles daily Folha de São Paulo as Brazil hits a new daily record for COVID deaths for the second day in a row.

A growing number of women are speaking out against the pervasive harassment they experience in hospitality schools and apprenticeship situations, writes Alice Raybaud in Paris-based daily Le Monde.

In recent months, complaints about the violence and sexism that reign in many restaurants have multiplied. The backdrop of all this is a workplace culture that disqualifies women in the kitchen and normalizes violence, all in the name of austerity, pressure and perfectionism. In this ultra-hierarchical, make-it-or-break-it world — where the chef is all-powerful (and sometimes admired) — people don't count their hours. They work late into the night and keep their mouths shut. It's a professional reality far from the golden reputation of French gastronomy, and it begins the moment training starts.

Driven by the #MeToo wave, the voices of female students and young graduates are starting to amplify as they testify to the harsh conditions of both their studies and their mandatory internships. Juliette C., who also graduated from the Lycée des métiers de l'hôtellerie d'Occitanie in 2018, told us about a teacher who would actually hit students hard on their shoulders. "We're in the kitchen," she explained. "It's a macho environment so we get hit and you can't say anything about it."

Marion Goettlé, head of the Parisian restaurant Café Mirabelle, is part of a generation that wants to put an end to the violence endured in kitchens. The 26-year-old says there's an "immense delay" in culinary schools and, together with chef Manon Fleury, is creating a prevention and awareness program to help culinary students combat sexist violence. Through the program, she and Fleury hope to teach young chefs how to identify abuse, name crimes and understand the mechanisms of violence.

With Pope Francis set to land Friday for a long anticipated trip to Iraq, the focus will be on the country's dwinding Christian population in the face of violence and persecution in the Muslim-majority and war-torn country. The Christian population has fallen by over 80% from 1.4 million in a 1987 census to fewer than 250,000 today.

The last thing we need is Neanderthal thinking.

— U.S. President Joe Biden slams the governors of Texas and Mississippi, who each announced they would allow businesses to reopen at 100% capacity and lift mask mandates for residents.