Welcome to Monday, where the Myanmar generals are tightening their grip, new COVID variants are identified and a very ancient watering hole is discovered in Egypt. We also have a Die Welt piece on the dark side of the dream of moving out to the countryside.

• COVID-19 latest: Researchers have identified seven new variants circulating in the United States, with similar genetic mutation to the more contagious strains found in the UK and South Africa. WHO investigators in China have discovered signs that the initial outbreak in Wuhan in December 2019 was much wider than previously thought.

• Myanmar military coup tightens: As armoured vehicles appear in several cities, Myanmar's military junta rushes through a series of changes to its penal code, warning anti-coup protesters they could face 20 years in prison if they obstruct armed force. Meanwhile, Aung San Suu Kyi's lawyer has announced the pro-democracy leader will be detained for a further two days before a trial via video link this week.

• Trump acquitted: Bipartisan support is growing for the creation of an independent commission to investigate the Capitol riots after former U.S. President Donald Trump was acquitted on Saturday of inciting an insurrection. Seven Republicans joined all 50 Democratic Senators in voting guilty, but fell short of the two-thirds majority required to convict.

• Indian climate activist arrested: Disha Ravi, 22, has been arrested on charges of sedition and criminal conspiracy for sharing online "toolkit" with information on the farmers' protests, which had been tweeted by climate activist Greta Thunberg.

• WTO's new director: Nigerian economist Ngozi Okonjo-Iweala is set to be named director general of the World Trade Organization, the first African and woman to lead the WTO.

• Argentina mourns Menem: Argentina has declared three days of national mourning in honor of former president Carlos Menem, who has died at the age of 90. The charismatic leader served from 1989-1999.

• World's oldest brewery: Archeologists in Egypt discover what could be the world's oldest beer factory dating back about 5,000 years in Abydos, an ancient burial ground in the desert. 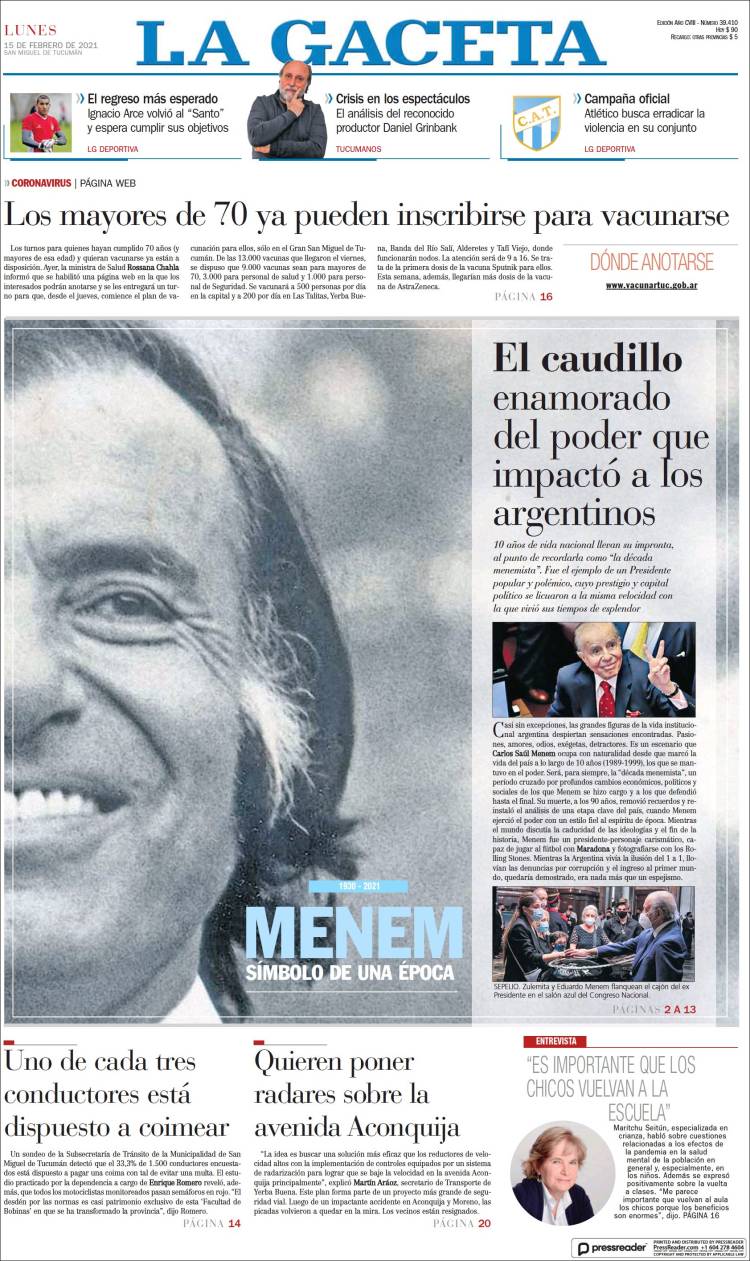 "Symbol of an era," titles Argentine daily La Gaceta, honoring former president Carlos Menem, who died at the age of 90.

How the dream of moving out to the countryside can backfire

Many urban dwellers fantasize about a rural lifestyle, especially in the middle of the pandemic. But leaving city life behind is easier said than done, writes Freia Peters in German daily Die Welt.

Between the two lockdowns, Bianca Berlin and her family moved to the German countryside, to a village of 400 people in the Uckermark region, around 100 kilometers north of Berlin. Having access to nature, especially during the pandemic, has been priceless, the 34-year-old mother of two explains. "The girls can build dens and climb trees without fear of coming into contact with other people," Berlin says. "During the first lockdown, in the city, I only went to the park at eight in the morning."

Many families would envy the Berlins. According to a survey of 2,700 city dwellers carried out last November by the polling institute Civey, around a third dream of a life in the country. For 25%, this is a long-standing wish, while for 10% it has been sparked or strengthened by the coronavirus pandemic. Home-working is opening up new possibilities, and during the pandemic, life in the cities can feel a bit grim.

But whether the moves will prove to be long-term is another question. Anne Dirfad from Hamburg fantasized for years about moving to the countryside, and when her husband, who works in advertising, got offered a new job in 2019, they finally took the leap. But things didn't turn out the way they'd hoped and expected. "It wasn't meant to be," she now says. "We had a lot of trouble making friends. Families there kept to themselves, and children in the neighborhood often went to their grandparents' in the afternoon."

Iranian woman suspected of 700k theft after her "arranged" marriage

A 26-year-old woman in Tehran suspected of more than a dozen thefts began by befriending wealthy female targets. But the plot for her big payday would require setting the trap for a man.

Iranian newspaper Sharq reports that the woman, arrested last week for allegedly stealing 700,000 euros in cash and property, confessed to previous more modest thefts from the homes of 15 women in Tehran. Police identified the suspect as "Roxana," who admitted to befriending women in affluent neighborhoods and stealing items from their bedrooms, telling them she needed to "freshen up."

But her plans to target one particular well-to-do family would take a bit more time — and a much bigger lie. She aimed to seduce the family's son, and trick him into proposing marriage. The young man, Amirhossein, admitted to police that he "fell for her" fast.

Presumably to assuage concerns that she was after the family's money, the suspect rented an apartment in Farmanieh, an expensive district in northern Tehran, where the marriage proposal eventually took place, with unnamed accomplices posing as her family.

One day, she asked Amirhossein to wait for her outside the same rented flat for her to come outside. He waited for three hours while, according to police, she had slipped out of the building, gone to his family home and broken into the safe with keys she had stolen. She emptied almost 700,000 euros (3.5 billion tomans) worth of cash and valuables before being arrested. Amirhossein told police that Roxana had been "quiet and kind" right until the end.

The world is watching.

— A jointly signed statement from Western ambassadors in Myanmar condemns the actions of the military and urges them to restrain from violence against protesters following the coup that overthrew the democratically elected government in the southeast Asian nation.