The economic crisis in neighboring Lebanon, coupled with COVID-19 travel restrictions, are causing the already war-ravished nation to drown in even greater misery.

SYRIA-LEBANON BORDER — Near a checkpoint on the border between Syria and Lebanon, 50-year-old Joelle says that conditions are simply "unbearable." A member of a Christian family originally from the city of Homs, she has spent the past 30 years in Masnaa, in the Lebanese Beqaa Governorate. In all that time, things have never been this bad, she explains.

For many Syrian residents, the 375 km-long border between Syria and Lebanon has always been an ecosystem where they earned their income. Back and forth trips between the two countries were common. But today, 10 years since the war that ravaged Syria began, the area is now mainly an observation post for all the upheavals that these two interlinked economies are experiencing — even if movements of goods and people have never been fully interrupted.

In recent months, the confluence of crises has increased poverty in Syria to an unprecedented level and has brought Lebanon's economy closer to the point of no return. One symptom of this tragedy: smuggling activities are surging in these traditionally porous border areas, and crime has never fared better.

As Samir Aita, president of the Arab Economists Circle, explains: "Syria is on the brink of a massive humanitarian catastrophe."

On top of the war came travel restrictions, starting last March, to contain the spread of COVID-19. That's had the unintended consequence of preventing new currency from entering the country.

The situation has worsened with the collapse of Lebanon's financial system. Billions of dollars belonging to the country's wealthiest sectors are now locked in bank vaults. This could be somewhere in the range of $30 to $40 billion, Aita estimates.

The cap on withdrawals and transfers by Lebanese banks is draining the circuit of currency exchanges both in the black market and imports — legal and illegal — especially with Turkey. According to Ankara's official statistics, these represent an average of $1.5 billion annually, at a constant level since the start of the conflict.

The scarcity of currency has another fundamentally destructive effect: Essential goods are being diverted and stored, for speculative purposes. This includes flour, which is a huge problem when bread has become the primary food commodity — if not the only one — in some governorates.

Petty corruption is flourishing more than ever

"Petty corruption is flourishing more than ever," Ali, a student living in Damascus, explains via an encrypted messaging app. "This is the first time that I have witnessed shortages of bread here in the capital. But on the other hand, if you have enough money to pay three times the subsidized rate and if you know the right person in the administration, then you can find whatever you want."

Talal, a 30-year-old living in Latakia, on the coast, explains that now he can only eat one meal every two days. "I'm a public servant, so I have some form of security. But even with my salary, I can no longer afford basic food, because prices have doubled. So with my wife, to feed our children, we take turns for dinner."

The World Food Program had already spoken out about that situation last spring, estimating that the average shopping basket had increased by more than 105% over the previous 12 months. "There's a real risk of famine, in the true sense of the word, because the Syrian government entered the health crisis with already empty state coffers," says Samir Aita.

A recent decision by the Syrian authorities to nearly double the price of subsidized gasoline has worsened the shortages on the Lebanese side of the border areas — shortages these regions had already been facing every day since March.

"Distributors now prefer to inject what gasoline they have into the smuggling market," says Hassan, a freight truck driver from Aleppo, who hires people every morning for less than $3 a day. "In Masnaa, 20 liters of gasoline are sold for 26,500 Lebanese pounds [about $3 at the current black market rate], while in Syria it sells for 125,000 Lebanese pounds."

As a result, the Lebanese government regularly cuts off the fuel supply to the Beqaa Governorate, creating a vicious circle. Along the road, many gas stations are closed. 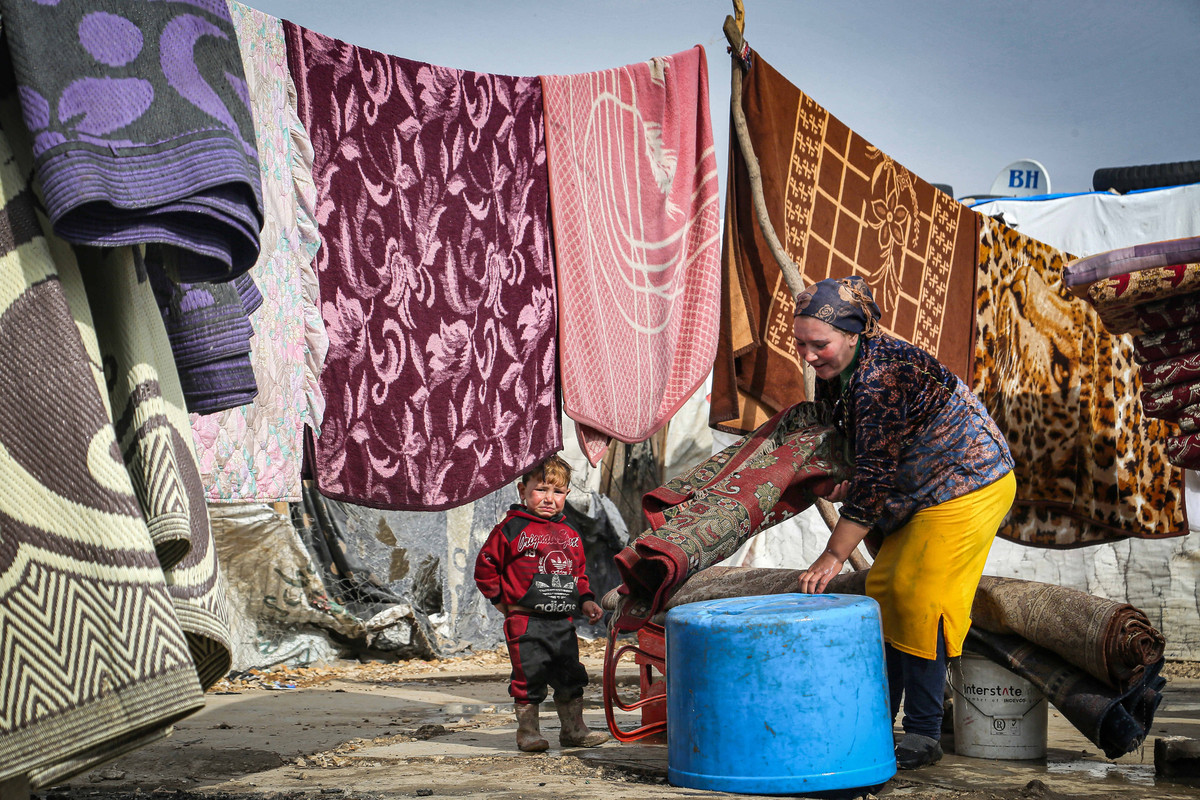 Unsurprisingly, black market networks have been the big winners of the crisis. Stuck at the borders or sometimes in the no man's land between the two checkpoints, several hundred people resort every month to the services of smugglers to get across the border, paying them sums that sometimes represent up to a year's salary for some families.

This was the case for Christine, Joelle's daughter, who left this summer with her aunt to renew her identity papers in Damascus for her university re-registration. The two women were barred from reentering the region by the Syrian army and were unable to turn back (Lebanon has regularly banned any entry of Syrians on its territory, because of COVID-19).

In the end, they had to pay 2 million Lebanese pounds (close to 400 euros) to return to Masnaa clandestinely, even if the household's sole income, which comes from the mother's housekeeping jobs, represents at most 400 pounds a month. Since then, without a valid residence permit, Christine has hardly dared leave her house, for fear of controls. Even worse is that she's now unable to work. Indebted by this unsuccessful trip, the family hasn't been able to pay its rent since July.

The workers with petty jobs who used to bring fresh cash to the Syrian side face the same problem and many have decided to stay on the Lebanese side, while waiting for the borders to officially reopen. That horizon is uncertain to say the least, as the pandemic breaks new records around the world.

In Damascus, officials point at the effects of U.S. sanctions included in the Caesar Act, which came into force last June. They accuse the West of starving civilians. The regime's supporters in Russia or in Europe have been quick to echo that rhetoric. But Samir Aita says the actual impact is minimal, that the Caesar Act — approved by the U.S. Congress to give the White House some weight in possible negotiations regarding reconstruction, among other things — is "eminently political."

Banks hold currency reserves that are equivalent to three months of imports.

While Syria's predatory regime bears most of the responsibility for the hardships of its citizens, one of the keys to improving their daily lives is in Lebanon. The values of the two currencies always evolve in parallel, as each devaluation of the Lebanese pound has been followed by a fall of the Syrian pound. But banks hold currency reserves that are equivalent, at most, to three months of imports, between $2 and 3 billion.

Lebanon is backed into a corner, and the Oct. 22 appointment of Saad Hariri as prime minister for the fourth time cannot be viewed as a sign that the political crisis that has shaken the country since the uprisings of 2019 will be resolved anytime soon. Hariri's ability to form a government is more than uncertain, especially without the support of Shiite parties and in a context of popular mistrust, as his return comes just a year after the people pushed him to resign.

"Right now the situation in Lebanon is worse than in Greece in 2009," says Samir Aita. "If Lebanon falls, Syria will become worse than hell on earth," worries Talal. Things will deteriorate even more, a staggering prospect given what the country has already suffered during 10 years of civil war.

The U.S. killed the ruthless leader last October in Syria at a low point for ISIS. But under his ...