Symbolism To Action, A Belgian King And Minneapolis Mayor

Among the many villains through Europe's colonization of the African continent, a case could be made that Belgium's King Leopold II was the worst. Responsible for the genocide of an estimated 10 million people, the 19th-century monarch ordered his troops and administrators to pillage the central African colony known as Belgian Congo, renamed the Democratic Republic of the Congo (DRC) after its independence in the 1960s.

With that history in mind, the images over the weekend of protesters defacing statues of the king across Belgium — in Brussels, Halle, Ostend, Ghent, Tervuren, Ekeren — is shocking only insofar as the rest of the world discovers that so many public statues of Leopold still exist. 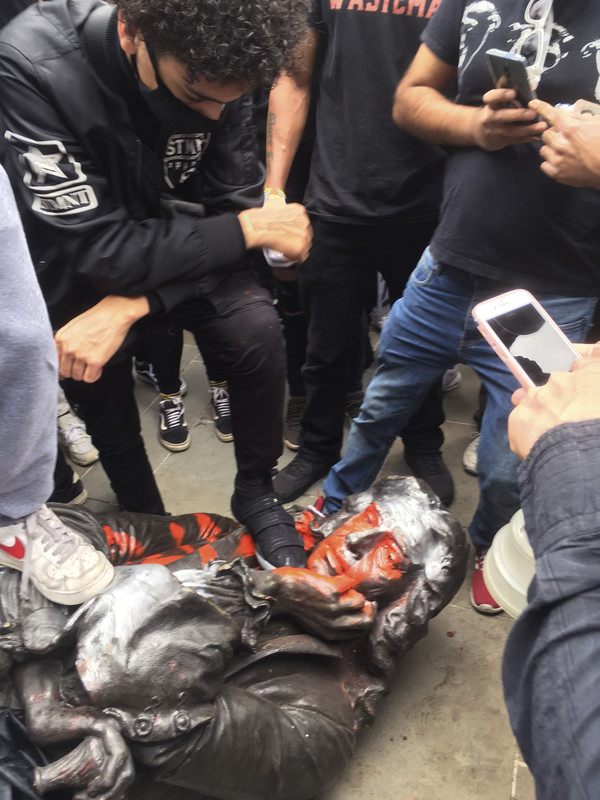 Protesters stand on the statue of Edward Colston after it is torn down in Bristol during a Black Lives Matter rally — Photo: Simon Chapman/ZUMA.

The same could also be said for other lesser known figures such as 17th-century merchant Edward Colston, whose company forced some 84,000 African men, women and children onto vessels that crossed the Atlantic Ocean to be sold into slavery in the sugar and tobacco fields of Caribbean islands. The world found out Saturday that a statue of Colston was on display in the British city of Bristol, where protesters pulled it down and threw it into the river Avon.

This crisscrossing of time and space, of course, comes amid a burst of global consciousness across the same Atlantic, following the police killing of yet another unarmed African-American, George Floyd, in the city of Minneapolis.

The question of symbols such as statues — and the symbolism of tearing them down — may help us to face our past. But real action must follow to push change forward. And that brings us back to Minneapolis, and what appears to be the potentially truly momentous news this past weekend, when a majority of city council members said they favor dismantling the existing police department, saying it was simply not reformable. By all accounts, it would be an unprecedented response to the question of violence and systemic racism in U.S. law enforcement.

For the moment, Minneapolis Mayor Jacob Frey, says he doesn't support the measure. Until now, the first-term 38-year-old progressive Democrat has seemed to do and say the right things on the question of police violence and racial inequality. Standing about as far as one could imagine from the likes of Leopold II, Frey must still know that history will be watching.

The concept of smart cities is a kind of received wisdom among planners and technologists, but ou...