Forced into exile in Lithuania after the contested Aug. 9 Belarusian presidential election, Tikhanovskaya is not giving up the struggle to push strongman Alexander Lukashenko from power.

VILNIUS — After 10 days of silence, officially due to a quarantine, Svetlana Tikhanovskaya is making up for lost time. Spontaneous and initially shy, the 37 year-old surprise candidate for the Belarusian presidential election is becoming more and more assertive, revealing an iron will. Currently a refugee from her homeland, in Vilnius, Lithuania, and living with her two children, Tikhanovskaya has suddenly found herself as the top opponent of the regime of President Alexander Lukashenko. She met recently with U.S. Assistant Secretary of State Stephen Biegun, who said he was "impressed."

In an Aug 25 interview with Le Monde, Tikhanovskaya said she continues to rely on peaceful demonstrations and strikes to bring down the man described as "the last dictator in Europe."

LE MONDE: When you left your country on Aug. 11, did you do so on your own initiative for security reasons or were you expelled by the regime?
SVETLANA TIKHANOVSKAYA: It was my personal decision to join my children here in Lithuania.

Did you hesitate to resume your political activities because of the threats against your husband, who is imprisoned in Belarus?
The election campaign was difficult: Every night I had to decide whether to continue or not. The question obviously arose again after my departure. I hesitated a little, but I had no right to stop what we were doing.

Today in exile, do you feel freer to carry on your fight or, on the contrary, feel cut off?
From here, I can do more for my country. It had become difficult for me to act, to speak, to move freely in Belarus. I had to hide all the time. Here, I am safe, I can contact whoever I want, I am more useful.

You believe that the presidential election was fraudulent and the results rigged. Do you consider yourself to be the president-elect?
We all know that the official results [80% in favor of Lukashenko] are false and that the majority of the voters voted for me. But the question is not who is president today, it doesn't matter. The important thing is that Belarusians can no longer trust Lukashenko, they just don't want him anymore. He doesn't have any more legitimacy. It didn't happen overnight, but little by little, what is happening is a revolution of consciences.

He may no longer have legitimacy, but he still has power. How do you intend to make him leave?
We call for all kinds of legal actions to assert our rights. All Belarusians want him to leave. They have changed, they have opened their eyes, they can no longer accept him as the head of this country after what he has done. Sooner or later he will leave thanks to peaceful demonstrations and strikes. The sooner the better to prevent the country from sinking into economic and political crisis. But everyone is prepared for the fact that this crisis may last for some time. The government knows that this movement will not stop.

Lukashenko still controls the security apparatus…
Throughout the election campaign, we called on the forces of law and order to stop obeying his criminal orders. And this is still the case: Everyone is invited to join us. We know that most members of the security forces have little to feel guilty about. But those who ordered crimes will have to be held accountable and justice will have to be done. Some have already found the courage to overcome their fear and join the people. It is not an easy decision, everyone faces their responsibilities. I am confident that Belarusians will not want to kill Belarusians.

The repression is more discreet and targeted than in the days following the elections, but it is not weakening.
Of course some forces support Lukashenko, but they must understand that it is no longer useful because society has changed, fear has changed sides. People will no longer allow themselves to be taken advantage of. They know that from now on, they are no longer alone in facing the repressive machine. 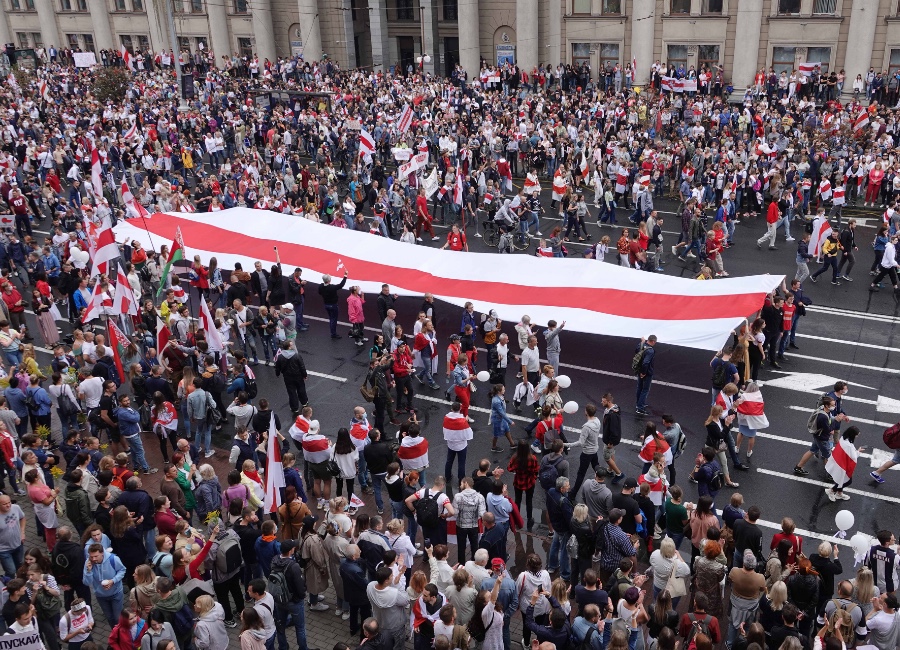 What do you think about the recent images of Lukashenko brandishing a Kalashnikov in combat clothing?
I don't know what he meant. I don't even understand the message. Instead of terrorizing the population, he provoked general hilarity.

You call for free elections. Will it be necessary to change the Constitution and the electoral system beforehand?
Above all, we demand the release of political prisoners. Secondly, we want a return to the 1994 Constitution, which limits presidential mandates to two. Finally, it will be necessary to replace the Central Electoral Commission, which citizens have lost confidence in.

Lukashenko is trying to stir up the threat of a border war, but people no longer believe him.

What do you expect from the international community and the European Union in particular: sanctions against Lukashenko, aid?
We received all the support we could hope for and it was very important for us to see that we were not left to our own devices. But we have nothing to ask of our foreign friends. It is up to us to solve our internal problems. Each country knows what it has to do and decides its actions on its own. We have no demands to make.

You met with an American diplomat on Monday and you videotaped a speech in front of the European Parliament on Tuesday. Do you also intend to speak with Moscow?
Now is not the time, but we are open to dialogue with everyone. It would be great if Russia would support our struggle for our rights but I will ask Russia, as I have done with everyone I meet, to respect our sovereignty.

Are you afraid that Belarus will become a subject of confrontation between Russia and the West, as is the case with Ukraine?
What happens in Belarus has no geopolitical impact. It is a purely domestic issue. Lukashenko is trying to stir up the threat of a border war, but people no longer believe him. I don't know the intentions of Russia or other parties, but our independence is not for sale.

The national television journalists who resigned have been replaced by Russian journalists. Is this interference from Moscow?
Maybe for these Russian journalists it is just a job like any other. But, from our point of view, it is disloyal. I have seen some of their horrible propaganda videos. But no one believes it anymore.

In Belarus, Purpose And Method In Hunting Down Demonstrators

Alexander Lukashenko's regime is sending more and more protesters to prison to try to prevent a n...

The opponents of ‘Europe's last dictator' are trying to avoid loss of life and focusing new energ...