Postcard From The Korean DMZ, The Last Cold War Border

Bill Clinton once called it "the most terrifying place on earth." A no-man's land with barbed wire and robot sentries, the area between the two Koreas has also become an unlikely wildlife refuge.

TONGILCHON — Kim Dan-geum would never have thought of the DMZ as an escape route. In September 2013, like all North Korean defectors, she opted instead to cross the Tumen River to China — at a cost of $2,000. After 10 years in the North Korean army, where she'd reached the rank of captain, she knew that the southern border — the famous Demilitarized Zone, or DMZ — was just too dangerous.

"Everyone in the country knows it's impassable," says the former military officer, who found a job with an insurance company in Seoul, where she finally arrived in late 2014 after fleeing through the mountains of Southeast Asia. "Even as a senior officer, it was inaccessible to me. The government only sends soldiers from powerful and loyal families," Kim Dan-geum adds. "They fear humiliating dissent on this crucial line."

Traced in 1953, after the negotiation of the armistice that ended the Korean War (though both sides are technically still at war), the DMZ that separates the two countries is the last remaining border of the Cold War. It is 248 kilometers long and 4 kilometers wide along the 38th parallel north, which used to form the inter-Korean boundary before the conflict.

Stuffed with anti-personnel mines, it is lined with high fences topped with barbed wire. From high watchtowers, guards watch out for possible intrusions or escapes. Surveillance cameras help them in steep areas. On the South Korean side, SGR-A1 robot sentries, designed by Hanwha Techwin, are also used to track human movements, locate weapons and potentially "neutralize" enemies with rubber projectiles or live bullets.

It's in the heart of this no man's land — an area former U.S. president Bill Clinton once described it as "the most terrifying place on earth" — that Kim Jong-un, the young North Korean dictator, and Moon Jae-in, the president of South Korea, met in late April for their historical encounter.

Everyone in the country knows it's impassable.

Unlike the North Korean leader and his late father, Kim Jong-il, Moon Jae-in knows the area very well, as he did part of his military service there. Enrolled in the Special Forces, he was part of the team deployed to the Joint Security Area in the days following one of the most serious disputes ever recorded at the border.

On the morning of Aug. 18, 1976, two U.S. soldiers accompanying South Koreans who went to prune a poplar tree that was hindering their surveillance of enemy lines were massacred with axes by soldiers from the North. After considering military retaliation, the United States finally opted for a show of force. On Aug. 21, they deployed attack helicopters, tanks as well as 800 men from U.S. and South Korean battalions, including Moon Jae-in, to pollard the poplar of discord.

There were others incidents as well, including the dramatic southward flight, in November 2017, of a North Korean soldier was shot by his comrades as he ran. But few reached the intensity of the 1976 events, which historians believe could have led to a new war.

On both sides of the buffer zone, the two governments are now trying to show their serenity in the face of the "permanent" threat from the enemy. They are also trying to "develop" the only two DMZ villages they were allowed to maintain after the armistice: Kijong-dong, built by the North, and Daeseong-dong, on the southern side.

From the top of Mount Dora, just south of the border, observation binoculars allow South Koreans to see a little movement in Kijong-dong. But the South Korean intelligence services doubt there are any civilians or "real" peasants in a city built essentially, like a Potemkin village, to demonstrate the Stalinist regime's "wealth."

At night, almost no light filters from the small three-story buildings with turquoise roofs, much more modern than the usual hamlets in the North Korean countryside. The enormous loudspeakers, installed below, are, however, well supplied with electricity and shout messages of propaganda towards the South. 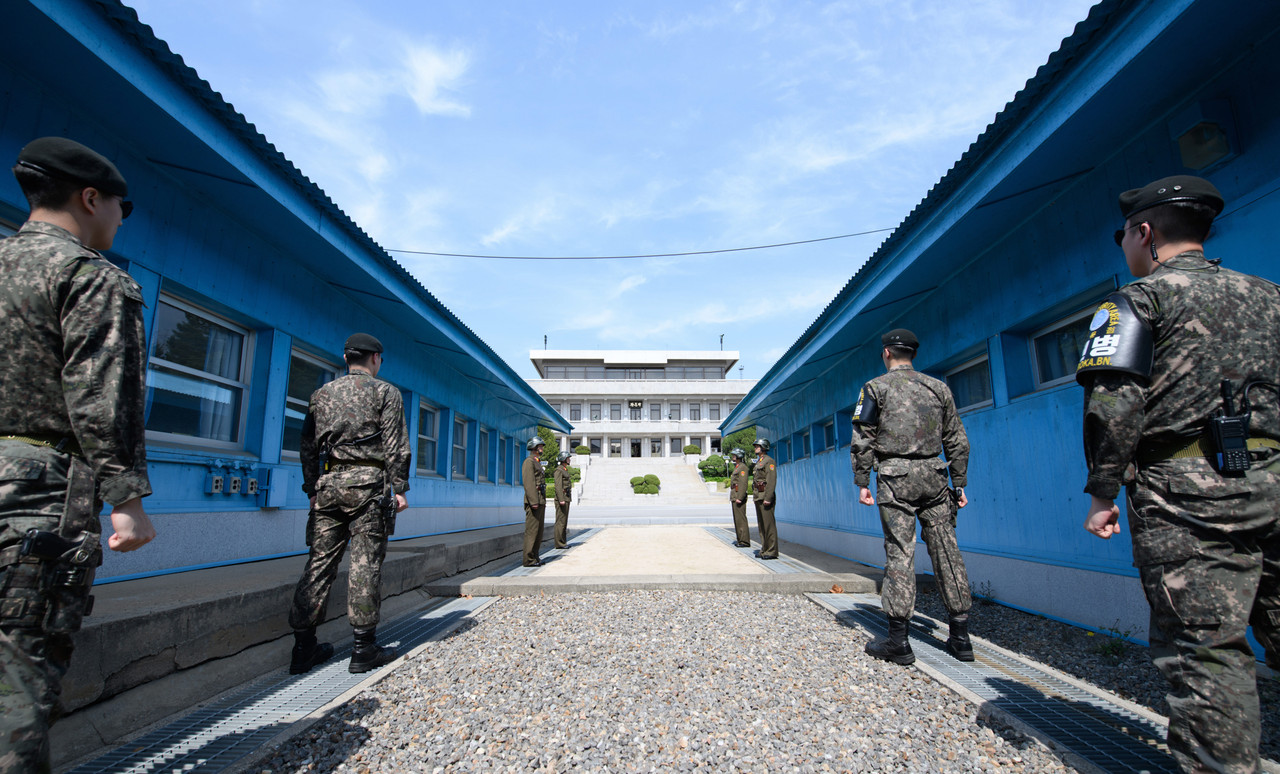 On the South Korean side of the DMZ border — Photo: Inter-Korean Press Corps/ZUMA

Some 800 meters away, these odes to North Korean socialism and the charges against the "American imperialists and their puppets in Seoul" are regularly heard by the inhabitants of Daeseong-dong. Close to 200 people still live there, under the permanent custody of UN security forces, which maintain a curfew after 11 p.m.

"Civilians without special authorization are forbidden access to Daeseong," says a guide near the road leading to the village. "These are farming families who grow mainly rice, red pepper, and ginseng. But they are much richer than the other farmers in the country because nobody here pays taxes and the land is free," she whispers.

Daeseong's young men are also exempt from the two-year compulsory military service. To avoid possible abuses linked to these "advantages," Seoul has imposed strict rules to a population consisting essentially of descendants of families that were historically settled there. The women of the village cannot marry young men from outside who haven't yet done their service.

In any case, there are few candidates for this life under tension near the border. And the region, like the rest of South Korea, is suffering from the accelerated aging of the population and the exodus of its youth to the major urban centers. Seoul is only 60 kilometers away. "Still, the government absolutely seeks to maintain life and economic activity in the region," the guide explains as we reach the village of Tongilchon.

This "Unification Village" is located 5 kilometers from the DMZ, inside the Civilian Control Line (CCL), which delimits — all along the border — a second, roughly 8-kilometer long strip of militarized territory. South Korean authorities set up the CCL after the war to protect themselves from another attack from the North. At all checkpoints, the South Korean army systematically verifies the identity of people entering or leaving the area.

The first settlements in Tongilchon date back to 1973 and were designed by Park Chung-hee, the strong man of the authoritarian South Korean regime at the time, on the model of an Israeli kibbutz. The goal was to occupy the land and show the Stalinist northern regime, which had higher incomes than the South at the time, the prowess of South Korean agriculture.

Everything can change in an instant.

With no significant human presence for over 60 years and no industrial infrastructure, the DMZ accidentally gave birth to a unique ecosystem, an ecological refuge for many species that are endangered in other areas of the peninsula. The area has thus become a traditional stopover for migratory birds, such as Asian whooping cranes. In the forests, wild cats are back, as are the very rare small spoonbills and white-tailed eagles.

During a mission near the CCL, researchers even discovered a species of water spider they thought was extinct — to the great satisfaction of the South Korean government, which is trying to reinvent the region by presenting it as a unique natural heritage site shared by the two Koreas.

But in the villages, this enthusiastic talk doesn't convince everyone. "I don't really see what's positive about living here, except that it's my parents' hometown," says Lee Wan-bae, the mayor of Tongilchon. He seems unimpressed with the recent resumption of dialogue between Seoul and Pyongyang. There have been, over the decades, so many sequences of rapprochement interrupted by sudden provocations of the Stalinist regime.

"Even though I've felt a little more relaxed lately, everything can change in an instant," he says.

Known as UBI, Universal Basic Income has been a dream of progressive economists. Now it is effect...