It's Me, Not You: Zelensky Between Trump And Biden — And Putin

The impeachment storm in Washington comes with high stakes in Ukraine as well, especially for the country's own TV-star-turned-President.

Donald Trump's response to the Ukraine-related impeachment probe is nothing short of surreal, with the U.S. president now openly calling on foreign powers to investigate a domestic political rival. The view from Kiev, meanwhile, is surreal in other ways.

President Volodymyr Zelensky, who, like Trump was a television star before turning to politics, has proven to be much less able than his American counterpart to play both roles simultaneously. Embarrassed by the initial revelations of the July 25 phone conversation with Trump — in which he also criticized Germany and France for not doing enough for Ukraine — Zelensky has released a single statement on the subject: "I think you read everything [in the transcript of the July 25 talk]. I don't want to be dragged into the democratic, open elections in the U.S. We had a good, normal conversation. We talked about a lot, and no one pressed me," said Zelensky during a meeting with Trump last month.

The view from Kiev is surreal in other ways.

The affair is exceptionally ill-timed for the 41-year-old Ukrainian president, an experienced and quick-on-his-feet comedian who has nevertheless stumbled as a newbie in politics. "In Ukraine, the focus of attention is expected to shift to what position Zelensky took during Trump's phone call," writes Kiev-based online media Novoe Vremya. In particular, many were surprised by the phrase: "The next Chief Prosecutor will be 100% my man."

Indeed, the troubling constitutional questions around Trump pushing a foreign country for an investigation of rivals, leading Democratic candidate Joe Biden and his son Hunter Biden, also threatens to compromise the integrity of Ukraine's political system. (It should be noted that Trump's call Thursday for China to do the same doesn't raise the same questions for Beijing, because of its lack of democratic institutions). 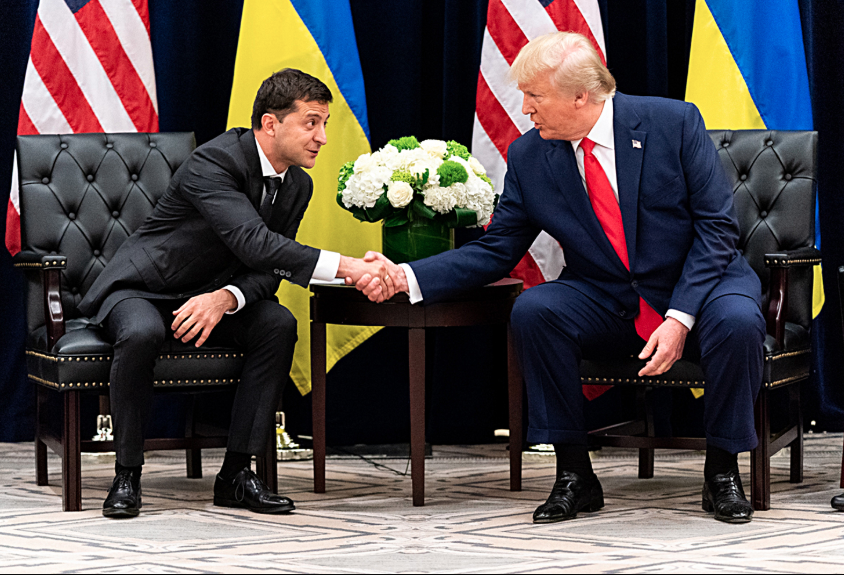 In Kiev, First Deputy Chairman of Ukraine's parliament, Iryna Herashchenko, wrote in a Facebook post just after the first revelations: "On the topic of independence of the parliament and security structures, as it has to be in the developed democracy countries, I have nothing to add. Those institutions were formed for centuries, while ours are designed and appointed according to their [Ukrainian top politicians'] own needs. If we want to have a strong country, we have to do everything for creating strong, independent institutions. Not '100% my man' and not in a 'your-wish-is-my-command' mode."

All the attention around closed-door dealings with major geopolitical fallout has raised a variety of theories in Ukraine of what really lies behind the story. Writing on the Ukrainian news website Levy Bereg, Oleg Petrovets suggests that it may have been Biden himself who orchestrated the leak of the phone conversation. Another of the authors' plotline has Trump as the source of it all, aiming to prod Biden into responding and thus shining attention on the corruption allegations.

As big as the Trump story is, the man keeping Zelensky up at night right now is Vladimir Putin. On Tuesday, after months of negotiations, Ukraine agreed to the so-called "Steinmeier formula" for new elections in the occupied territories of Donbass, which Zelensky hopes will bring an end to five years of armed conflict between the two neighbors. His domestic opponents insist that the Ukrainian president has given in to too many Russian demands in order to secure a summit with Putin later this year in Paris. "The Steinmeier Formula, to which the new government agreed, is elections in the occupied territories without Ukraine's participation," writes Ukrainian political analyst Serhiy Taran.

The man keeping Zelensky up at night right now is Vladimir Putin.

Still, even as tensions remain high in its own neighborhood, Ukraine is sure to remain at the center of events inside the halls of Washington — and hardly the way Zelensky had in mind when he was trying to warm up to Trump.

As summed up in a Facebook post last month by Ukraine's former Foreign Minister Pavlo Klimkin. "Whatever happens next [...] Ukraine will remain as the country that led to the beginning of the impeachment process of the U.S. president. Not a very cheerful prospect. But now everyone knows what we are capable of."

We must remember the many lives lost to coronavirus. But we should also not forget the fate of ...

The New Year's Eve prison exchange between Russia and Ukraine was a rare softening of hostilities...