A new Greenpeace report warns that foreign fishing fleets, mostly from China, are gobbling up every bit of marine life they can into "stadium-sized" nets.

English edition • WORLDCRUNCH
BUENOS AIRES — A recent survey of fishing in the South Atlantic by the environmental group Greenpeace suggests that Argentina's sea waters are "under siege" by a fleet of foreign vessels.
The NGO found hundreds of foreign ships, mostly Chinese, but also Korean and Spanish, competing for fish in international waters on the edge of the Exclusive Economic Zone (EEZ) that Argentina administers for up to 200 miles from its shore. The area affected is not covered by national or international laws, and a survey from 2019 already found signs of a depletion of resources due to over-exploitation.

"The lack of fishing control is such that at the time of monitoring we found more vessels bordering Argentine waters than the number of vessels authorized within the EEZ," warned Luisina Vueso of Greenpeace in the report.

Greenpeace recently counted at least 470 boats in a biodiversity hotspot.

The Chinese fleet that is stationed just beyond the limits of the Argentine Sea is as extensive as a city, explains Vueso. It is the same fleet that was moored off the coast of Ecuador a few months ago and that led President Lenin Moreno to make an international call to combat it, since Ecuadoran resources are insufficient in quantity and capacity. This is the same as in Argentina.

This fleet, which goes from the Pacific to the Atlantic through southern Argentina and Chile, has apparently not gone unnoticed by the U.S. navy, which proposed joint exercises between Argentine ships and its patrol ship the USCGC Stone. Argentina rejected the offer last February.

Greenpeace recently counted at least 470 boats in a biodiversity hotspot known as "Agujero Azul" or the "Blue Hole," off the Patagonian coast between Chubut and Santa Cruz. Vueso told Clarín that usually, Argentine coastal waters have 270 boats concentrated in an area of roughly 1 million square kilometers. Right now there are 470 boats are extracting stock like squid and other species in barely 5,000 square kilometers. 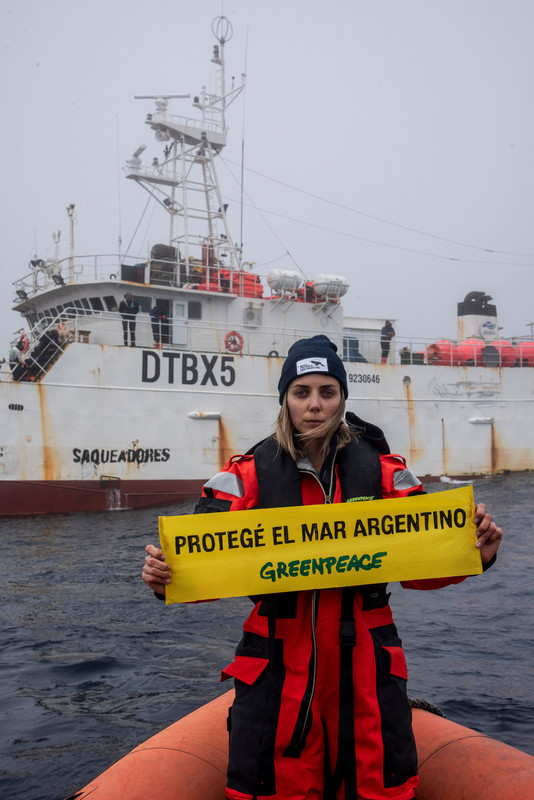 To make matters worse, the fishing boats are accompanied by four oil ships serving as enormous gas stations, along with eight reefer (fridge) ships that receive the catch directly from fishing boats to take them to consumer countries, unmonitored. Vueso says the boats are equipped to work around the clock, and can be fueled and hand over their catch at sea. The laws of the capitalist jungle apply here.

Greenpeace warns that there are no checks on this type of fishing, which sweeps up marine life with underwater nets almost the size of football pitches. These reach the seabed and pick up all there is, regardless of numbers, endangered status or usefulness. Greenpeace concluded in 2019 that years of exploitation had devastated the seabed off the Argentine coast.

Faltering legality also affects those employed in the sector, and their labor and human rights. In past months, the Argentine government decided to step in, increasing fines on illegal fishing, but undermining its action by mixing it with nationalist rhetoric relating to the Falklands. It suspended a South Atlantic cooperation committee with the British, though overfishing is in fact still happening off Patagonia.

The laws of the capitalist jungle apply here.

The country's Security and Defense ministries have responded by announcing more checks. The latter has formed a Naval Command to fight illegal activities, though this is already running into problems because of the lack of naval and air instruments needed to pursue violators. Also, it can only act in territorial waters.

The legislature's lower house is separately considering a draft law to protect the continental platform extended by the United Nations, though Argentina would still have to manage certain foreign interests and work within treaties signed with powerful states like China.

Greenpeace hopes that pictures taken by the boat Esperanza during the week of Feb. 23 will compel the international community to implement a Global Ocean Treaty through the United Nations and create a network of ocean sanctuaries including the "Blue Hole".

Vueso says that, beside the Ocean treaty, which Argentina backs and has promoted regionally, "there is a draft law for the creation of the 'Blue Hole Protected Marine Area,' specifically to extend protection to the Argentine Sea ... and its ecosystems. The approval of this law is entirely and exclusively in the hands of our legislators."