Beyond Gaza: Seething Youth In The West Bank Are Radicalizing

For fear of losing legitimacy to Hamas, supporters of the ruling Fatah party have joined the riots that have left at least 19 people dead since Friday.

SILWAD — At the end of the unrest in their village of Silwad this past Saturday, under the watchful eye of a few adults and a spotter, perched on a roof at the edge of the village, dozens of children, barely 10 years old, are trying to throw stones at an Israeli base located 200 meters away. The soldiers are on the road that leads south, through beautiful terraced hills, to Ramallah, the seat of political authority in the occupied West Bank.

This was May 15, the day of remembrance for "Nakba" ("catastrophe") — the forced exodus of 700,000 Palestinians when Israel was created in 1948 — the entrances to Silwad are littered with the remnants of larger clashes. On Friday, Mohammad Hamad, a 30-year-old resident of the village, was killed by soldiers. The two days of rioting have left 19 people dead, according to the health services, across a hundred Palestinian towns and villages. This is a death toll not seen in the West Bank since 2002. But this is the first response in this West Bank that broods over its marginalization, far from the conflict in Jerusalem and far from Gaza where Hamas has been embroiled in an all-out war with Israel since May 11.

At nightfall, the inhabitants of Silwad climb onto their roofs to follow the light filaments traced by Hamas rockets in the sky over the coast. The town has been very active since the British Mandate in Palestine and the founding of the nearby Israeli settlement of Ofra in the 1970s, behind an Israeli army base. On May 6, soldiers captured a Hamas member, Montaser Shalabi, who had taken refuge in the village for four days after killing an Israeli settler on Route 60.

Mohammad Hamad did not have the profile of an activist. According to the villagers, he tried to run over soldiers in a car at the entrance to the military base and then brandished a screwdriver at them. This tall, stout, simple boy, a construction worker, had few connections in his village. He was not married, an exception at his age. Four years ago, he was sentenced to one year in prison for resisting arrest by the Israeli police: He was going to Jerusalem without a permit to pray at the Al Aqsa Mosque.

For days, Mohammad had been watching on his parents' television the footage of police repression of worshipers on the Esplanade of the Mosques. On Friday, he prayed and asked his mother for forgiveness before going to the base. His father, Rawhi, also a construction worker, holds up a photograph of the scene. Mohammad lies under the open door of his car, a trickle of blood dripping from his skull. "The soldiers could have shot him in the legs," says Rawhi Hamad. "Why in the head? They murdered him."

On Friday, the army fired live ammunition at rioters in Ramallah, Nablus and Hebron. On Saturday, the army seemed to be measuring its response to smaller riots. On the last day of the Eid celebrations, marking the end of Ramadan, the West Bank Chamber of Commerce called a national strike.

These clashes should not be underestimated.

In the center of Ramallah, the only official demonstration in the Palestinian territories in remembrance of the Nakba gathered barely 200 people. A siren sounded at noon and the meager procession made its way to an army base on the eastern edge of the city. Equipped and experienced stone-throwers advance through the tall grass, in small isolated groups, toward soldiers who held them at gunpoint on the road and on the slope under the walls of the base.

These clashes should not be underestimated, although they are certainly not on the same scale as the bombing and destruction in Gaza. The young men had not experienced this level of violence in years.

"We were 10 years old during the last war in Gaza [in 2014], we didn't do much. This time it's ours! The sulta [Palestinian Authority] will say what it wants; it can't stop us from defending Al Aqsa," says 17-year-old Rami, cooling off from the clashes. He and his friends are descendants of families from Lod, a mixed city in Israel, where the Nakba is remembered as a particularly bloody event. 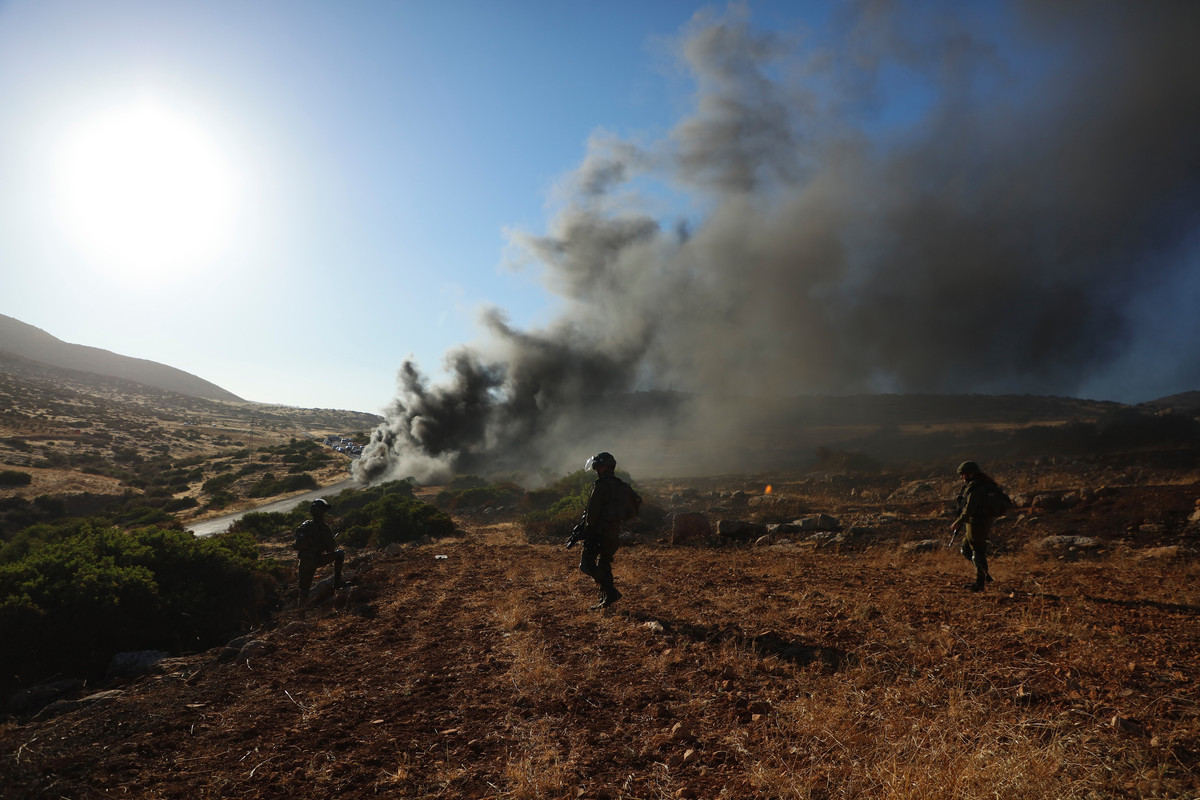 The young men had not experienced this level of violence in years — Photo: Oday Daibes/APA Images via ZUMA Wire

What does the Palestinian Authority want? Mahmoud Abbas met with the American and French presidents, a diplomatic tradition that is a Pavlovian reflex, as the head of the Palestinian Authority has no control over what happens in Gaza. On Friday evening, one of his close associates, Jibril Rajoub, warned on television of three dangers facing Palestine: the entrenched division between the West Bank and Gaza, the end of dialogue with Israel and an overthrow of the "system," the power in the West Bank.

Since Friday, however, Abbas' party has been seething. The council of Fatah leaders in the major cities called on Saturday for its supporters to join the demonstrations. On the roads, Israeli roadblocks are multiplying. Soldiers and inhabitants are afraid of each other. The rules of the game are torn up.

A senior Palestinian officer noted that the mood among the security forces is dark. There is a good opportunity to overturn the balance that makes them the deputies of the Israeli forces, guardians of an order devoid of any political purpose.

"The majority of the riot organizers are Fatah supervisors, who feel ashamed. They are trailing behind Hamas and the Jerusalem activists. They know that we risk losing the support of the population," says Qaddoura Fares, a Fatah supervisor and president of the Palestinian Prisoners Club. "But this is still just a short-lived emotional reaction."

For the past month, in his village of Silwad, this affable man has been enthusiastic about the peaceful resistance movement of the inhabitants of Sheikh Jarrah, in East Jerusalem, threatened with eviction in favor of Israeli settlers. He regrets that Hamas rockets have erased this struggle from village conversations.

"Hamas has stepped in like the muscle-bound hero of a Bollywood movie: At the last minute, it turns the table and everything changes." Make way for violence. Make way for Khaled Mashal, the exiled political leader of Hamas, who is five years older than him and who went to school with Fares in Silwad.

Fares was a candidate in the Palestinian legislative elections, the first planned in 15 years. President Abbas postponed the vote indefinitely at the end of April, fearing that it would slip through his fingers. His dissident Fatah list remains a source of unrest within the party. "The presidency does not have much influence on events, so it risks losing control," says one of its leaders, Nasser al-Qudwa, who has just returned from Gaza.

In the riot that swelled at the gates of Ramallah on Saturday, Jamal Tawil, a Hamas political supervisor, came as a neighbor. This former mayor of a middle-class suburb of the city, who spent 16 years in prison in Israel, was a legislative candidate for Hamas. This week, Israeli soldiers arrested three members of his list. He says, "two others fled before the soldiers arrived." The army increased the number of preventive detentions during the week, without mentioning the identity of its targets.

The Islamist movement is weak in the West Bank, the result of 15 years of security cooperation between the Palestinian Authority and Israel. But this conflict offers it an opportunity to make up for the election campaign that will not take place, and to win new support. Tawil watches the youth with a smile. He shakes hands with the organizers of the riot, linked to the Palestinian Authority, whom he knows well and who welcome him as a colleague.

Welcome to Wednesday, where Israel carries out first airstrikes on Gaza since the ceasefire in ...

The Many Reasons Erdogan Plays The Palestinian Card

Even as other Muslim leaders were treading more carefully on the Palestinian question, Turkey's l...