When China stopped importing seafood products from North Korea as part of new sanctions, businesses along the border were bound to pay the price.

HUNCHUN — The main fish market in the Chinese village of Hunchun, just along the North Korean border, looks like a ghost town these days. The alleys are deserted, the shop floors — littered with wrapping paper — seem to have been precipitously abandoned. "For Rent" posters are taped over the windows. Just a few weeks ago, this same market was swarming with life. Trucks rolled in to unload their cargo of crabs, scallops, squid or sea cucumbers — the strange conic tentacles — the rare global imports from the Hermit Kingdom. The fish vendors then supplied the shops and restaurants of China's big cities to diners across the country especially hungry for these crustaceans and mollusks raised in water spared from pollution.

But all this activity has stopped cold since China, applying the latest United Nations sanctions, banned all imports of lead, iron ore, and fish products from its rogue neighbor. Coal purchases had already halted in February. On the sign — written in Chinese, Korean and Russian — of the only wholesaler in the market open in the middle of a recent afternoon, an immense orange King crab extends its legs bristling with spikes. In the depot, somber and silent, the polystyrene crates and unused boxes pile up against the walls. The trays, normally used to display shellfish, sit empty.

A man emerges from a small, lit store. He says that he was "in a meeting" in his office. In reality, he was killing time drinking tea and smoking cigarettes with an employee from the neighboring business, spread out on a couch and preparing to return home to the southern city of Guangzhou. "I'm going for many weeks of forced vacation, and I gave time off to my 10 employees. Maybe permanently … " sighs Ding Zhenhua, 35, who gets 80% of his goods from North Korea.

The embargo is a hard blow for this town of 250,000, which largely depends on importing seafood, like the other cities from this border region. Hundreds of businesses in Hunchun are on the edge of collapse, and thousands of people are at risk of losing their jobs, according to many locals.

To survive, Ding Zhenhua, who invested much of his savings in tools and gear, has planned to meet with a Russian exporter in the evening. The meeting will be decisive. "If I can make a deal, I will bring back my employees. If not, I'll have to lock up forever," he says bitterly. Ding will have to negotiate carefully. Russian King crab is already about 30% more expensive than the North Korean crab was before the embargo, and the prices have shot up since. Another reason for worry: Russian products are subject to substantial taxes, which the North Korean products didn't have.

On the evening of August 14, in the port of Quanhe (situated 30 kilometers from Hunchun), on the bridge that spans the Tumen River separating the two countries, authorities stopped 25 trucks that were returning from North Korea. The trucks were filled to the brim with hundreds of tons of seafood products: All of it was destroyed. 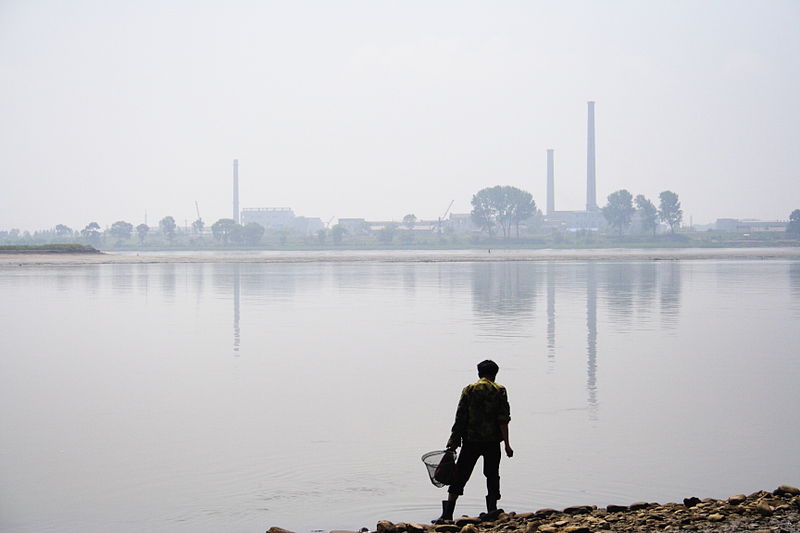 Angered by the swift action, Hunchun business owners quickly took to the streets to protest, an increasingly rare reaction on the part of Chinese merchants. "Sanction North Korea as long it doesn't result in losses for Chinese citizens!" implored one sign. Protesters have since been silenced by the Communist authorities in Beijing.

Li Yaohua (name has been changed), a businessman from another market in the city, doesn't hide his irritation. "This is the first time that I've seen sanctions this severe," says the 40-year-old. "The government should warn us two or three months in advance. This isn't reasonable! You develop a business over ten years and suddenly, the gates are closed."

The market may never see the light of day.

Adding to the anger of Hunchin's shopkeepers is that many invested in a 120 million RMB ($18 million) construction of a new marketplace, which was expected to lead an economic expansion for the city, largely encouraged by local authorities. Almost completed, the construction was interrupted, and the market may never see the light of day. Li Yaohua risks losing 10 million RMB ($1.5 million) Behind his office, a shelving unit is decorated with two small flags, Chinese and North Korean. But he too will also attempt to partner with Russians, even though he risks seeing his margins sink and believes that the Russians are "not workers." He counts on his four restaurants and his shares in hotels to help cushion the shock, although these enterprises were also affected by the trade sanctions.

The smaller business owners will have more difficulty in staying afloat. The tenant of the neighboring shop, though, is not resigning to the new order. He has just completed a trip to North Korea to try and find a supplier for sea cucumbers and import them "discreetly," by an ethnically-Korean, Chinese middleman.

Others are waiting to see how things will turn out. "I still have some Russian crabs, but all the restaurants and tourists think we're out of stock and don't come anymore," says Wang Hui, 36, who has already paid the rent for her shop for the next year. If the situation doesn't improve, the mother of two will return to her hometown in Anhui, in central China, which she left four years ago. But she's not too bitter, ready to "sacrifice" and support the decision of the government "if it's in the interest of the country."

He helped develop a hybrid rice that tackled hunger in his country and beyond, and when Yuan died...