Ivory Coast On The Potomac? Democracy At Risk In U.S. Election

PARIS — It was the kind of headline that risks fading into your news feed as if it were barely news: "Ivory Coast: As Presidential Election Approaches, International Criminal Court Worries About Violence," Jeune Afrique magazine announced last week.

And so it followed, as votes were cast this past weekend in President Alassane Ouattara's contested run for a third term, with Radio France Internationale reporting that violence had begun to spread as the opposition rejected the result and called for "an opening to a civilian transition."

Elections, we're reminded again, are both the strongest safeguard and weakest link of any country calling itself a democracy. For those without a long or deep democratic tradition, from West Africa to Southeast Asia, the act of opening the polls can become the moment the true nature of the system is laid bare — either for the unrest set off in the streets, or the certainty of the results, or as we've seen recently in Belarus, both.

The messy counting of the votes in Ivory Coast, of course, coincides with another campaign coming to a head an ocean away. There, instead, ahead of Tuesday's U.S. presidential election, similarly worded headlines jump straight off the page: "With Election Day Looming, an Anxious Nation Hears Rumblings of Violence" is one from The Washington Post. Another from NBC News reads: "Trump has Signaled He Won't Accept an Election Loss. Many of his Voters Agree."

Elections are both the strongest safeguard and weakest link of any country calling itself a democracy.

In the months after Donald Trump's 2016 victory, commentators from less-than-democratic parts of the world noted, sometimes with a cruel twinkle of irony, that the new president resembled the political "strongmen" American governments had long propped up elsewhere. Trump, to a large extent, has done his part to fulfill such predictions: bullying opponents and allies alike, regularly attacking a free press, egging on the basest behavior of his worst followers — all fueled by a craven desire for attention and utter disregard for telling the truth.

Still, we are told that "the institutions" of democracy, including the 2018 mid-term elections that handed the House of Representatives back to Trump's rivals, have been built to withstand such power grabs. 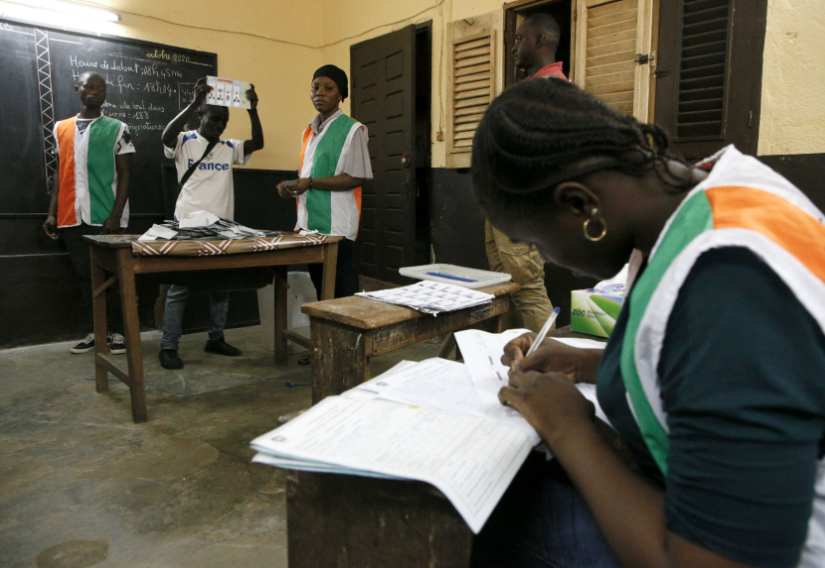 Now, the ultimate institutional test has arrived for what Americans like to boast is the "world's oldest democracy:" For the first time in living memory, the basic discharge of safely and properly electing the nation's leader is said to be in serious doubt. The subtext is that nothing guarantees the perpetuity of one form of government or another, as we've seen repeatedly over the past century, from 1930s Germany to to 1970s Chile to Thailand since 2014.

As an American who has lived abroad for years, I've read these headlines with much trepidation, but also with a bit of distance that comes from, well, distance; but perhaps from also having watched how power changes hands in different countries, where repeated failures of the most fragile democracies stand in stark contrast to the resilience of more stable political systems.

There are entire chunks of American public life that will be hard to recover.

Since its independence from France in 1960, Ivory Coast, has sadly fit too often in the category of the democratically fragile. President Ouattara came to power in 2011 only after a civil war had been set off by the refusal of longstanding President Laurent Gbagbo to cede power after "postponing" elections for five years. And now Ouattara himself has claimed a third election victory, even though the constitution sets a limit of two terms. Opponents have largely boycotted what they say is a rigged contest, and the country is bracing for what could again be protracted conflict.

The similar cloud of uncertainty and diminishing trust is now hanging over the American democracy. With its 224-year history (flaws and all), as well as the United States' continued superpower status, mean the rest of the world will be watching — strongmen and democratic activists alike.

Commentators have been cataloguing the entire slabs of American public life that will be hard to recover after four years of Trump, and harder still after eight. Much of what this president has tried to undermine are those other fundamental components of a functioning democracy: pluralism, civil debate, basic decency.

Still, with Election Day upon us, I am doubtful that he will succeed in upending that cornerstone of free and fair elections. In recent days, courts have overturned Republican party attempts to limit voting — a sign that the institutional safeguards are working. No, what worries me most about the fate of our political system is something else: that the undemocratic candidate might win again. Or, to paraphrase Franklin D. Roosevelt: the only thing we have to fear is democracy itself.