VR For HR: Virtual Reality As A Tangible Tool For Human Resources

Latin American firms are joining others around the world testing Virtual and Augmented Reality solutions in personnel recruitment and training.

BUENOS AIRES — The image of someone wearing a virtual reality (VR) headset immediately makes you think they're playing games. Yet immersive simulation is now being used to recreate a work environment where present or future employees can learn, practice and train for work.

While simulation technology is used more frequently for operations or the security sector, in Argentina some firms are using it to manage human resources: in selection processes and in staff inductions and training.

VR is part of an "experimental learning methodology," says Tomás Malio, CEO of Covrel, a firm that develops VR solutions. It "lets people retain much more information than grabbing and reading a document," he says.

The reason why learning this way is more effective is because it is about "perceiving, feeling and doing," says Malio. He calls it "active learning that allows you to retain between 90 and 95% of the information, because you can actively experience it."

A key characteristic of VR is its ability to simulate "situations at a highly realistic level while the user is interacting in a safe space and receiving constant feedback," says Gabriel Pereyra, CEO of Modo Beta, a management consultancy. It is ideal for situations where insufficient training could prove highly dangerous to the employee, for example where they handle heavy machinery, repair high-voltage equipment or work in potentially toxic environments. Pereyra calls this a "new paradigm in learning, immersive learning."

Some VR developments are also focusing on recruitment or as Malio says, as part of "assessment methodology."

Assessment is used in group interviews that include role-playing and other methods to see how candidates react to situations. All this can be done in a simulated environment. VR can also be used to introduce a new employee to a firm's culture. Beermakers Cervecería y Maltería Quilmes have developed, with Malio's Covrel, a VR experience where recruits "tour" their premises and get a sense of how it feels to work in its emblematic brewery in Quilmes in the capital.

The experience was created in 2019 and the firm wanted a headset per workcenter. But the pandemic changed that, says María Guadalupe Narvaja, head of the firm's Culture and People Experience, and "we opted for cardboard goggles that let you circulate with a phone application." 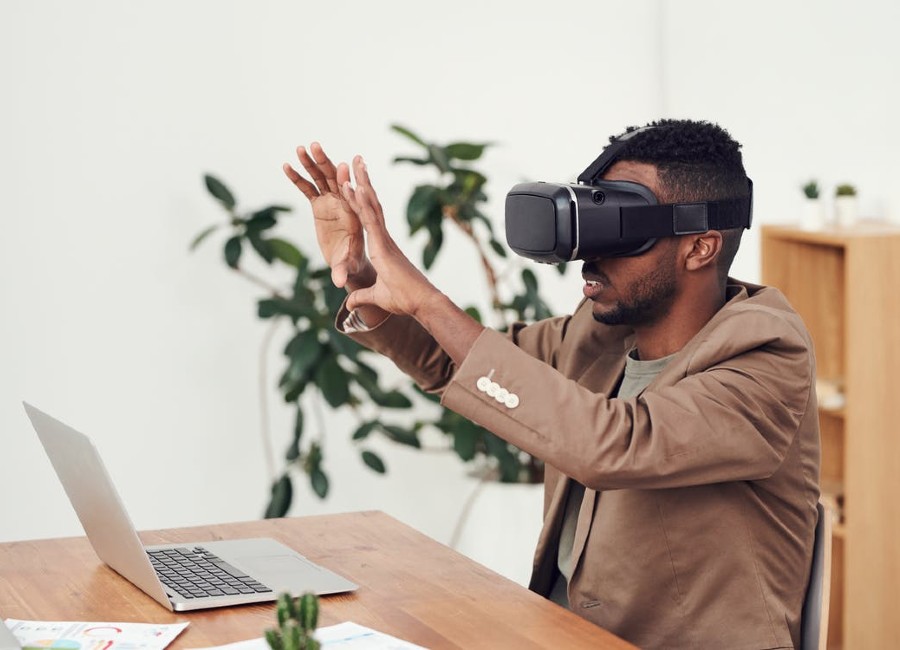 VR can also be used to introduce a new employee to a firm's culture. — Photo: Fauxels

The virtual tour of the firm became "our ally," she said, when people had to work from home. Narvaja says "it's impressive how well virtual reality and the experience are connected. Those who have done it not only know the firm like they had toured it, but also get to know the brewing process and history of Quilmes."

These tools cost money, but Narvaja says "their returns are high at all levels: in terms of learning, because when you do something you really grasp it, but also to democratize opportunities in firms with considerable geographical expansion."

She says Quilmes could use the technology into other areas, "like learning to make beer. I don't know how the new normal will be but I think we're going toward multi-platform experiences because we don't all learn the same way."

The postal firm DHL has in past years accelerated use of multiple technologies to its processes, including using augmented reality (AR) glasses in warehouse management and VR in staff training.

It can change the nature of virtual meetings.

In South America, DHL uses VR for inductions. With tours and games, new workers are immersed in an interactive platform on the firm and its operations. The firm says this boosts their interest and work efficiency.

AR is used to show staff the difference between urgent and standard deliveries, the right import and export documents, agents' functions and responsibilities and procedures for following up, receiving and charging for packages.

Alberto Oltra, head of DHL Global Forwarding for Spanish-speaking Latin America, calls VR training "a more collaborative, innovative and efficient experience." And he says the technology is increasingly important not just for training but also to present products or empower customers.

Globant, a digital solutions firm, has created VR prototypes in the pandemic "for internal use, to measure the state of the art and see how it would work," for example for virtual group meetings, says its Technology chief Gonzalo Ordeix. He says VR is presently used in sectors like aeronautics or to train factory staff, which are areas where training itself is risky, "or to travel to places that are inaccessible personally."

Ordeix says VR is in its early stages in Latin America, but "has begun and will keep evolving," particularly in hardware. "Current headsets are fairly uncomfortable and we're also limited by the bandwidth. We're not ready yet for the 360 degrees video streaming."