Campo del Cielo, in the far north, has an usual concentration of meteorites. But little by little they're being pilfered, and often smuggled out of the country.

BUENOS AIRES — A long time ago, in an area far far from Argentina's big cities, a shower of meteorites rained down from the sky, littering a 15 by 70-sq-km patch of land with an untold number of space rocks.

The meteorites, spread out in the provinces of Chaco and Santiago del Estero, are the remnants of an 840,000-kilogram asteroid that exploded in our atmosphere. And to this day — some 4,000 years later — the Campo del Cielo (Sky Field), as it's known, remains one of the strangest places on earth, torrid and utterly barren.

But because of the unusual prevalence there of aerolites (meteorite rocks), this otherwise unremarkable place has become a magnet in recent decades for vandals and traffickers prospecting for the extraterrestrial stones like they were gold, and then selling them on the black market for gold-like prices.

Staff at the Scientific Educational Park in Gancedo, in the province of Chaco, say that gangs have entered the park, unearthed the rocks and loaded them onto trucks to take away. And they can take all the time they way, given how big the area is, and who infrequently scientists visit (just once a month).

They accuse people living near the park or on its edges of encouraging or conniving in these thefts. "They think they'll get rich selling meteorites," says Carlos Cerrutti, a geologist working at the Scientific Park.

This otherwise unremarkable place has become a magnet in recent decades for vandals and traffickers.

Specialists do not know where the rocks are unearthed. "Some are sitting outside on the surface. Others are buried," Cerrutti explains. "They may be using metal detectors to take them out of the ground." Either way, most thieving operations are successful, he says. The geologist is also concerned that the thieves are becoming more violent.

There have also been robberies in the Park's museum, most recently in May. The watchman on duty later said the thieves, armed with knives, arrived at night, tied him up, and finally left with two pieces weighing 25 kilograms and a third weighing 18 kilograms.

One of the most daring, though unsuccessful thefts was in 1990, when thieves sought then to take the 37.4-tonne "El Chaco," the biggest aerolite to have fallen in Argentina and considered the second biggest in the world. Another meteorite was stolen that year from a school collection of 300 rocks picked up by pupils around Gancedo.

Nicolás Goldberg, an artist who has used meteorites in his work and helped index hundreds of pieces for the Park museum, recalls that approximately 400 pieces were seized when they were about to be smuggled through Uruguay or Paraguay. But most of rocks simply disappear. The Astronomy Association of Chaco believes more than six tons of meteorite fragments have been stolen in the provinces of Santiago del Estero and Chaco in recent years. 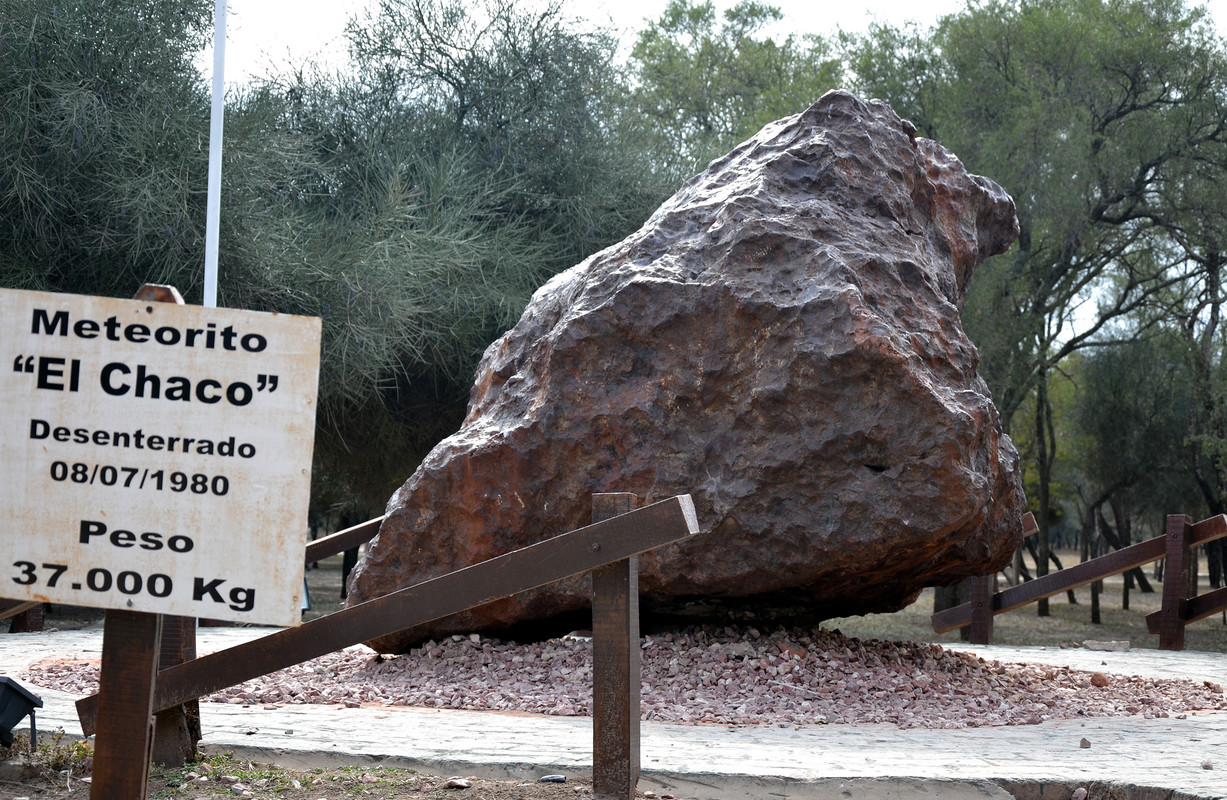 Alejandro López, an astronomer and researcher at CONICET, Argentina's state research agency, says there's also been a "globalization of the meteorites black market." The rocks have "very high" levels of nickel content, which gives them value, he explains. Collectors like to get them for display purposes. Others use the meteorite fragments to make jewelry. López also notes that part of the Campo del Cielo is in private hands, making the meteorite removal even harder to control.

He says that collectors pay locals to help them access the rocks. And according to Mario Vesconi, president of the Chaco Astronomy Association, it's having a corrupting effect on people, "destroying the innocence of country folk" who think the rocks will make them rich.

The meteorites found in Campo del Cielo are siderites, or metallic, and they're rare. Only 5% of the world's meteorites have such properties. "When people realized these little 'bits of iron' could be worth hundreds or thousands of dollars, within a few years nobody had a single bit of meteorite left on their ranch or field," Vesconi explains.

Websites marketing meteorites are abundant. One of the best known is run by an Alaskan geologist, Eric Twelker, who sells fragments from around the world, including many from Chaco. His site shows that a piece weighing a kilogram or more can fetch around $1,000, and also instructs visitors on how to reach Campo del Cielo.

While the two provinces and the Argentine state have passed laws declaring meteorites found or to be found in Argentina to be part of the nation's cultural property, thefts continue. "The laws haven't proven to be particularly effective, and once these objects cross our borders, they end up in completely legal sales circuits in other countries," Vesconi laments.

The geologist Cerrutti says that every theft represents the loss of valuable scientific information. "We won't be able to interpret how the meteorite shower happened 4,000 years ago if they empty the park," he says. "All the scientific data will be gone."

The point to bear in mind is that these rocks come from outer space and were circulating around the sun for some 4.5 billion years. Before landing on the earth, they traveled thousands of trillions of kilometers. As such, they offer valuable clues about the origin and evolution of the solar system. "This is a unique, finite and highly endangered heritage," says Vesconi of the 400 tons of aerolites buried in Campo del Cielo.

In the case of the shower on Campo del Cielo, says Vesconi, "the study being undertaken on its field of craters has allowed us to recover the formative masses, determine crash speeds, angles of incidence and estimate the energy at stake at the moment of impact of each celestial body."

"Every site where a meteorite has hit our planet is a puzzle that must be pieced together by specialists of various areas to be fully understood," he adds. "That's why they must be preserved and protected from theft and destruction."