PARIS — The address is not by chance. Courbet, a jewelry designer that sells synthetic diamonds, has decided to open at the world's most prestigious location for any jeweler: the Place Vendôme in Paris. Setting up shop at No. 7, becoming neighbor to establishments like Cartier and Van Cleef & Arpels, is a daring move, especially for a brand that does not sell "real" diamonds, but stones grown in four weeks inside a Silicon Valley laboratory. Their product shares the composition of natural diamonds, but is 30 to 40% cheaper.

This is a growing market in the United States, and in France Courbet, which touts itself as an ethical and green brand, is the second firm after Innocent Stone to explore this niche. "If you want to shake the market and make the world of jewelry evolve, you have to be at its heart," says Courbet's French founder Manuel Mallen who has partnered with the Swedish designer Marie-Ann Wachtmeister.

Mallen knows what he's talking about: for 25 years he was head of the watchmakers Piaget, then Baume and Mercier in France. Along with partners, he then bought the firm Poiray, before he sold his stake.

"Lab diamonds are the diamonds of the future," he said. Beyond the issue of mining's environmental impact, Mallen sees in synthetic diamonds "an alternative when the natural ones are dwindling." According to consultants Bain and Company, the volume of rough diamonds will peak in 2019, before declining between 1.5 and 2% a year.

A trend that is disrupting the sector.

Courbet (named for the "disruptive" 19th century painter who had an affinity for Place Vendôme) wants to present its collections in similar conditions as the great jewelry houses of the chic Parisian square. In fact, more traditional jewelers are closely monitoring the rise of a trend that is disrupting the sector.

Courbet's diamonds include 0.3 carats, and are thus certified as natural. The start-up firm has four suppliers, two of them wholesalers, in the United States and Antwerp. The lab stones are then cut by artisans in Lyon, Paris and other locations in Italy. Courbet goes further, also using recycled gold. While the engagement ring is at the heart of its collections, Wachtmeister has come with other, clever ideas like earrings that double as finger rings. Items range in price from 300 to 30,000 euros. Wachtmeister says all the manufacturers behind these grown diamonds "are children of diamond dealers. For this new generation this is an innovative concept, and they treat them like they would" natural diamonds. 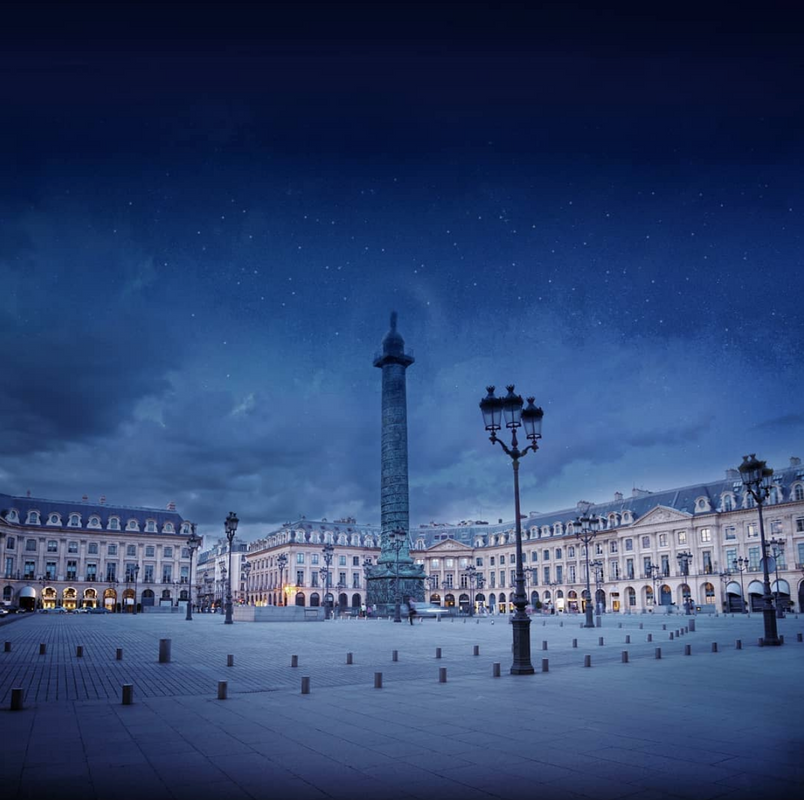 For distribution, the young brand has settled into an elegant showroom and appointments for visits can be made online. Its website will begin sales in June, targeting millennials "nurtured on ecology," and "concerned" women (yoga, organic foods, etc...) for whom buying from Courbet "makes sense."

The start-up's primary challenge for now is to become known. Its capital is shared between the founders and angel and institutional investors, and will devote a major chunk of an initial five million euro investment on communication. "Our aim is a turnover of 50 million euros within 5 to 6 years, and to balance the books by 2020," says Mallen. Like a pioneer, Courbet is hoping to strike gold.

LES ECHOS
France's top business daily, Les Echos covers domestic and international economic, financial and markets news. Founded in 1908, the newspaper has been the property of French luxury good conglomerate LVMH (Moet Hennessy - Louis Vuitton) since 2007.
Support Worldcrunch
We are grateful for reader support to continue our unique mission of delivering in English the best international journalism, regardless of language or geography. Click here to contribute whatever you can. Merci!
CONTRIBUTE
Economy

Across southern Europe, all eyes are on the German elections, as they hope a change of government might bring about reforms to the EU Stability Pact.

BERLIN — Finance Minister Olaf Scholz (SPD) is the front-runner, according to recent polls, to become Germany's next chancellor. Little wonder then that he's attracting attention not just within the country, but from neighbors across Europe who are watching and listening to his every word.

That was certainly the case this past weekend in Brdo, Slovenia, where the minister met with his European counterparts. And of particular interest for those in attendance is where Scholz stands on the issue of debt-rule reform for the eurozone, a subject that is expected to be hotly debated among EU members in the coming months.

France, which holds its own elections early next year, has already made its position clear. "When it comes to the Stability and Growth Pact, we need new rules," said Bruno Le Maire, France's minister of the economy and finance, at the meeting in Slovenia. "We need simpler rules that take the economic reality into account. That is what France will be arguing for in the coming weeks."

The economic reality for eurozone countries is an average national debt of 100% of GDP. Only Luxemburg is currently meeting the two central requirements of the Maastricht Treaty: That national debt must be less than 60% of GDP and the deficit should be no more than 3%. For the moment, these rules have been set aside due to the coronavirus crisis, but next year national leaders must decide how to go forward and whether the rules should be reinstated in 2023.

The debate looks set to be intense. Fiscally conservative countries, above all Austria and the Netherlands, are against relaxing the rules as they recently made very clear in a joint position paper on the subject. In contrast, southern European countries that are dealing with high levels of national debt believe that now is the moment to relax the rules.

Those governments are calling for countries to be given more freedom over their levels of national debt so that the economy, which is recovering remarkably quickly thanks to coronavirus spending and the European Central Bank's relaxation of its fiscal policy, can continue to grow.

Despite its clear stance on the issue, Paris hasn't yet gone on the offensive.

The rules must be "adapted to fit the new reality," said Spanish Finance Minister Nadia Calviño in Brdo. She says the eurozone needs "new rules that work." Her Belgian counterpart agreed. The national debts in both countries currently stand at over 100% of GDP. The same is true of France, Italy, Portugal, Greece and Cyprus.

Officials there will be keeping a close eye on the German elections — and the subsequent coalition negotiations. Along with France, Germany still sets the tone in the EU, and Berlin's stance on the brewing conflict will depend largely on what the coalition government looks like.

A key question is which party Germany's next finance minister comes from. In their election campaign, the Greens have called for the debt rules to be revised so that in the future they support rather than hinder public investment. The FDP, however, wants to reinstate the Maastricht Treaty rules exactly as they were and ensure they are more strictly enforced than before.

This demand is unlikely to gain traction at the EU level because too many countries would still be breaking the rules for years to come. There is already a consensus that they should be reformed; what is still at stake is how far these reforms should go.

Time for Draghi to step up?

Despite its clear stance on the issue, Paris hasn't yet gone on the offensive. That having been said, starting in January, France will take over the presidency of the EU Council for a period that will coincide with its presidential election campaign. And it's likely that Macron's main rival, right-wing populist Marine Le Pen, will put the reforms front and center, especially since she has long argued against Germany and in favor of more freedom.

Rome is putting its faith in the negotiating skills of Prime Minister Mario Draghi, a former head of the European Central Bank. Draghi is a respected EU finance expert at the debating table and can be of great service to Italy precisely at a moment when Merkel's departure may see Germany represented by a politician with less experience at these kinds of drawn-out summits, where discussions go on long into the night.

The Stability and Growth pact may survive unscathed.

Regardless of how heated the debates turn out to be, the Stability and Growth Pact may well survive the conflict unscathed, as its symbolic value may make revising the agreement itself practically impossible. Instead, the aim will be to rewrite the rules that govern how the Pact should be interpreted: regulations, in other words, about how the deficit and national debt should be calculated.

One possible change would be to allow future borrowing for environmental investments to be discounted. France is not alone in calling for that. European Commissioner for Economy Paolo Gentiloni has also added his voice.

The European Commission is assuming that the debate may drag on for some time. The rules — set aside during the pandemic — are supposed to come into force again at the start of 2023.

The Commission is already preparing for the possibility that they could be reactivated without any reforms. They are investigating how the flexibility that has already been built into the debt laws could be used to ensure that a large swathe of eurozone countries don't automatically find themselves contravening them, representatives explained.

The Commission will present its recommendations for reforms, which will serve as a basis for the countries' negotiations, in December. By that point, the results of the German elections will be known, as well as possibly the coalition negotiations. And we might have a clearer idea of how intense the fight over Europe's debt rules could become — and whether the hopes of the southern countries could become reality.

DIE WELT
Die Welt ("The World") is a German daily founded in Hamburg in 1946, and currently owned by the Axel Springer AG company, Europe's largest publishing house. Now based in Berlin, Die Welt is sold in more than 130 countries. A Sunday edition called Welt am Sonntag has been published since 1948.
Support Worldcrunch
We are grateful for reader support to continue our unique mission of delivering in English the best international journalism, regardless of language or geography. Click here to contribute whatever you can. Merci!
CONTRIBUTE
THE LATEST
Germany
Tobias Kaiser, Virginia Kirst, Martina Meister

Across southern Europe, all eyes are on the German elections, as they hope a change of government might bring about reforms to the EU Stability Pact.

The prima ballerina Eleonora Abbagnato recently bid farewell to the Paris Opera, under the gold roof of the historic Palais Garnier. It's an obligatory passage for Parisian ballet dancers of a certain age, a moment that is often happy, always dreaded and sometimes salutary.

How COVID-19 Has Impacted Expat Life

COVID-19 has disrupted the lives of billions of people all over the globe, and expats are no exception.

On The Border Of Bosnia: Voices Of Afghan Migrants

Keep up with the world.
Break out of the bubble.
Our expressly international daily newsletter
TRENDING TOPICS
MOST READ
boris johnson
Bertrand Hauger

Latin America, The Next Mecca For Digital Nomads