Digital Fort Knox: Inside The World's Most Secretive Data Center

Inside the Swiss Fort Knox - Mount10-wiki

SWISS ALPS — The data center lies in a former military bunker beneath a mountain in the middle of the Swiss Alps.

This is where pharmaceutical companies save their recipes for patented medicines, where banks save the personal data of their customers and where NGOs save the data of their benefactors. The locals, too, recognize the value of the safe. Both the upper and lower house of Switzerland's parliament have their servers hidden here.

The data center, known as the Swiss Fort Knox, is considered to be the world's safest place to store data.

"We are the last resort. If something goes wrong here, it is highly likely that all the data will be gone forever," says Christoph Oschwald, who co-founded the company Mount 10 that created the Swiss Fort Knox.

Since 1994, Oschwald and business partner Hanspeter Baumann converted the former headquarters of the Swiss Air Force into a top-notch data center by installing emergency diesel engines, a ventilation system, a filter and an air-pressure system to prevent the entry of any poisonous gases. Water from an underground lake keeps the center's cooling system at 8 degrees Celsius. All the data is encrypted and the digital key to decrypt them remains with clients.

"Should all ties be severed we are still able to function autonomously for several weeks," says Oschwald.

In case all the security measures fail, an underground network of high-speed cables links the center to a second server that holds a backup of the data in a mountain 10 kilometers away.

Data centers are the latest battleground in the war for information.

Ever since whistleblower Edward Snowden's revelations, it appears that any means to an end are sanctioned in the digital sphere. Snowden revealed that National Security Agency spies in the U.S. had identified themselves as information technology staff at private companies to gain access to servers.

Such a deception would be difficult to carry out at the Swiss Fort Knox. An intruder may get past the front door camouflaged as rock but, beyond that, it's a complicated system of tunnels that only people with necessary clearance can access. Oschwald, who was a Swiss paratrooper, ensures that security checks are water-tight. We are only allowed to reveal that these checks start with a biometric facial recognition scan, watched over by a security guard, the head of the company and a camera. On the other end of the camera, someone, somewhere, in Switzerland, pushes the buttons to open steel doors that weigh 3.5 tons and lead into the innermost sanctum of the data center.

The entrance to the bunker — Photo: Mount10-wiki

But not everyone is convinced that data centers like the Swiss Fort Knox are unbreachable.

Oschwald knows that his fortress is not impregnable. There are cables connected to his servers that allow for data to be sent to and from the outside world. And his firewalls have to be taken down for maintenance every once in a while. "But there are a lot of dangers that we will not be subjected to here. Just think of solar storms." These storms cut electricity in Sweden in 2003 for several hours resulting in damaged servers. Indeed, several flights to the U.S. had to be rerouted in 2012 after solar storms wreaked havoc on servers. These incidents demonstrate how vulnerable our digital world is and the growing need to store data safely.

The Swiss Association of Telecommunications estimates that the space for data centers will grow 10% every year. The amount of data generated in the world doubles with each passing year. About 300,000 million pictures are uploaded everyday on Facebook alone. Data generated by people has already entered the "zettabyte" sphere, a level that ordinary people are unable to even comprehend. All this data needs to be stored in a physical hard drive and that's where Switzerland comes in.

Only Ireland has more data centers per capita than Switzerland, a country that has positioned itself well on the international data protection market. 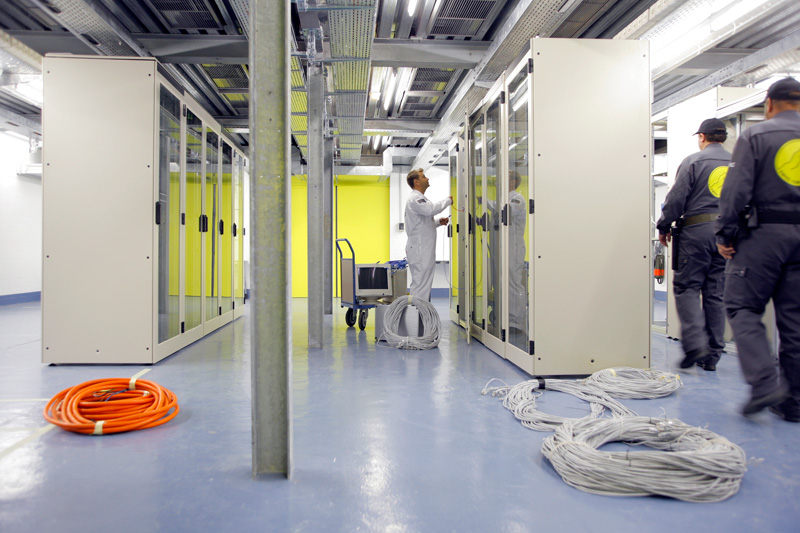 Many companies believe Switzerland is a great location for data servers, preferring it to countries like Germany despite the fact that the latter is home to a quarter of Europe's server centers. Mike Jank, co-founder and chairman of the encrypted communications company Silent Circle, points out that his customers do not trust a product if it comes from the European Union, Russia or Asia. And certainly not one from the U.S. Customers fear that intelligence services in those parts have unhindered access to supposedly secure information.

But such beliefs are misplaced, says Steiger.

"Switzerland only operates at an average level when it comes to data security as our conditions here are very close to that of the EU," he says.

Switzerland is attractive to customers because of its image. "If a company is located in Switzerland it still emanates trustworthiness," Steiger says.

That image also draws the trust of the wrong kind of people. Oschwald is aware of this.

"We most certainly do not want any dubious clients or criminals as customers at our data shelter," he says. Although the company does not know the contents of the data it stores, the access to external IP addresses gives them an idea about their clientele. "We have never had to cancel a client's contract to this day," he says.

After we leave the Swiss Fort Knox, Oschwald points to the camouflaged front door of the center. "This is not just meant to be used by large companies," he says.

"I am not just interested in the business side of things in this case. I am also a citizen. I do not understand a state which takes liberties and delves ever deeper into our privacy. I do not understand most of the general population who do nothing to protect their private data either. What would you say if you received letters at home that had already been opened and read by authorities? Would you like that? No? There you go."