AI, Big Data and blockchain are some of the expensive tools that are necessary for precision farming, but their contribution to cost-effective and greener agriculture is making them essential to any farmer wanting to produce food for world markets.

The first thing any producer or contractor will tell you is that automatic pilots and variable rate seeding and application (VRA) are now established as basic requirements. These applications must now be incorporated in any new machine, and have a great impact on the efficiency and quality of field operations.

"Autopilot systems are a highly adopted technology. As the signal improves, there will be more variable-rate seeding and application with section cuts," says Diego Villarroel, a precision farming specialist at the Manfredi agricultural testing station in Argentina's central province of Cordoba. The most widely sold technologies he cites are seeding control monitors, satellite mappers and yield monitors, though he says operators need more training in their use.

Private consultant Andrés Méndez agrees, pointing out that universities in Argentina still lack precision farming courses. But he says firms are using these technologies more than thought and reaching interesting conclusions. Producers, he says, "invest in data analysis and more than recover their investment. The big supply firms have taken notice, and have their data analysis buildings."

Clarín's correspondent spoke to Villarroel, Méndez and some producers in Carlos Casares in the Buenos Aires province, where the farming services firm Tomás organized a conference on agriculture technologies.

The president of Tomás, Carlos Borla, told the opening of the conference, "We are convinced that with these techniques we can produce in a way that is friendly to the environment, rural workers and the communities to which we belong. But we will also maximize production per hectare, so we can survive tax pressures and current trade wars in the world."

In the quest for higher production with lower costs, another increasingly used tool is weeds sensors that apply products with precision and assure savings of up to 90% in inputs while reducing the environmental impact. There are also electronic dosing systems for seeding machines, which boost the speed and precision of work. Beside crop farming, intensive livestock farming is also adopting these technologies to boost efficiency and quality. 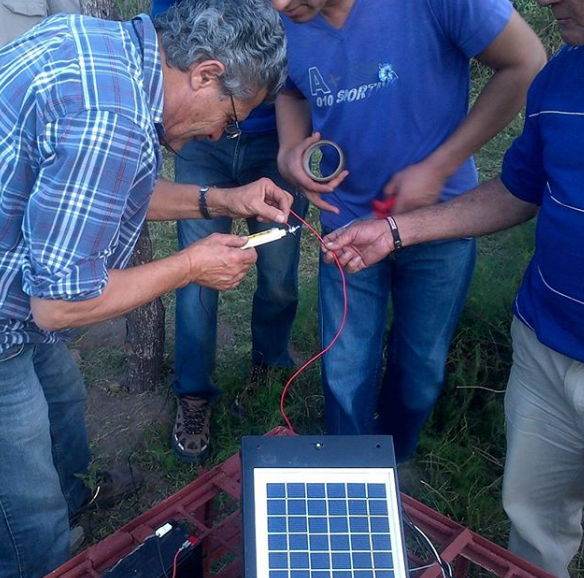 Working on solar panels in an Argentine field — Photo: INTA Argentina via Instagram

Villarroel explains that drones make it easier to monitor extensive areas and allow early detection. Insurance firms, he says, are incorporating drones to allow them to quantify damages much more easily, and there is great demand for training in the interpretation of yield maps. Indeed, Argentina's National Agricultural Technology Institute (INTA), which runs the Manfredi station, provides courses every year for 450 people, mostly young agronomists who now need this skill on their CVs.

Looking a little further down the line, Méndez, the private consultant, sees satellite imagery not drones pictures as the up-and-coming source of information. "Drones will be used for application" of products, he says, and this is already happening in Argentina "with vehicles carrying up to 100 liters of product."

The producer who doesn't enter this dynamic will find it very hard to compete.

Another instrument Méndez mentioned as quietly gaining adepts and intended to complement overhead data, is the so-called SmartFirmer, a soil sensor fixed to the planting machine, to scan conditions like moisture or temperature prior to seeding. Méndez says it collects much detailed, updated soil data compared to overhead or satellite images. He says "there is never an ideal moment for investing in new technologies, especially if we don't know where we would use them, but in the long term, putting seeds in the wrong place will cost you dearly."

In the coming years, Méndez says the market will insist on product differentiation, and such instruments are key to a more efficient production chain. He cites traceability as an example of a product's added value in future markets. Certain products, he says, are already on shelves with QR codes allowing consumers to know their entire production process just by scanning them with a phone. "The producer who doesn't enter this dynamic will find it very hard to compete," he says. He believes companies working in large portions of land should already have an IT engineer on their staff. In the coming years it will be clear which technologies have passed the filter and joined the world of high-tech agricultural production.