Daimler-Mercedes Benz car parking on its own - Daimler official website

Germany's Bosch and Daimler are teaming up to achieve a high level of success in autonomous parking, becoming the first to have a marketable system far from Silicon Valley.

MUNICH — Moon-bound rockets and driverless cars have plenty in common. For example, in the 1950s, American road cruisers looked like spaceships on wheels. Steep tailfins and stylized jet engines made the drivers dream of a better, accident-free future. The vision for a vehicle which can steer, brake and accelerate on its own fits in well with this optimistic view of the future. But it turned out that the design elements made for aviation are not quite right for cars. Ultimately it was easier to find a parking space on the Moon than to park autonomously in front of the local supermarket.

There are many reasons why adapting space technology to cars did not work. Among other things, there is no traffic on the way to the Moon. In driving school, we not only learn to master the technology but also (if possible) develop a seventh sense for other road users. Because people sometimes interpret the traffic rules a bit more freely, which can lead to complications well beyond the supermarket parking. Driving has a lot to do with communication and interaction. In the best case scenario, driving inspires a sort of swarm intelligence. In the worst case, we are in phantom jams that are created out of nothing and only arise because people react wrongly or not at all.

A technical feat that does not come from Silicon Valley

Worldwide, many automakers and tech companies are working on sending their driverless cars to a sort of driving school. Automaker Daimler and Bosch, one of the leading technology and services suppliers worldwide, have now applied an essential idea of the moon landing to the road. They do like they do with the rocket ship, which receives radio support from the control center: they remotely lead the cars in the parking garage to a free space. The driverless cars act only seemingly autonomous; in fact, they are in a close network with the infrastructure. Because the "flight route" is precisely defined by a leading computer, dozens of unmanned cars can be in the car park at the same time. The passengers leave the car at the entrance of the parking garage and can worry about better things than parking bumpers.

Driving has a lot to do with communication and interaction.

The parking garage ballet takes place only at a walking pace. Nevertheless, it is a technical feat, because the system works so reliably that the regulatory authorities have given the go-ahead for driverless parking for the first time. Because the network technology works completely without human surveillance, it is relatively easy to transfer to other countries. While driverless taxis currently only work with security drivers in individual, well-defined areas, autonomous valet parking can be marketed quickly. For example, airports would no longer need to fill their best locations directly at the terminal with parking garages: Driverless parking also works over longer distances, as long as no other users cross the road. 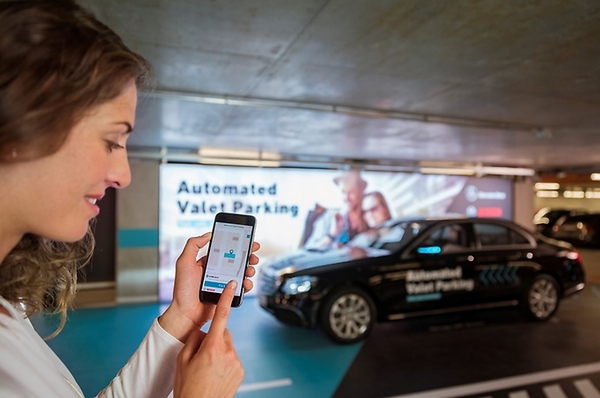 It takes little imagination to envision fully automated container terminals at ports or truck depots. Bosch and Daimler have created precise automated parking because they are the first to have a marketable system that could become the norm for all other automakers. And it was created in a founder's garage, which was exceptionally not in Silicon Valley, but in Swabia. What follows are further discussions with the registration authorities in order to finally put highly automated driving on motorways using concrete licensing regulations. Although the driver remains behind the wheel as a controller, the comfort gained by these highway pilots could still be high.

In any case, the countdown to autonomous driving has begun. After millions of test kilometers and billions of dollars invested in autonomous driving, there is now a concrete, everyday business model. It is quite possible that driving robots will actually be as suitable for the masses in ten years, as many studies predict.

Around 140,000 Germans are residents in Spain, with large enclaves established on the southern co...