What If Moscow Is The Real Loser In The New Syrian Chessboard?

MOSCOW — The USA betrayed the Kurds. This was the blunt interpretation from Dmitry Peskov, press secretary to Russian President Vladimir Putin, following the Turkey-Russia agreement on northeast Syria signed earlier this week in Sochi.

The Kurds have been the Americans' most loyal allies in Syria, yet Washington abandoned them. Now Kurdish military units are at risk of being run over by a Turkish onslaught if they refuse to leave their positions along the border. Russian-Turkish patrols will monitor the fulfillment of these conditions. The first convoy of Russian military police has already arrived in the Syrian city of Kobani.

We can consider the agreement between Putin and Erdogan in Sochi officially fateful.

Some in Russia have seen Peskov's open declaration of the betrayal of the Kurds as the final act in the moral destruction of the irresponsible U.S. policy — and announcement of a major Russian triumph. They abandoned their allies, and we will now save them, as if forced to correct the errors of others. But to what extent are Kurds, and their fighting force — the Kurdistan Workers' Party — truly "ours" now?

It was the Turkish President Recep Tayyip Erdogan who, in the presence of his Russian counterpart, called Kurds terrorists. We can consider the agreement between Putin and Erdogan in Sochi officially fateful. 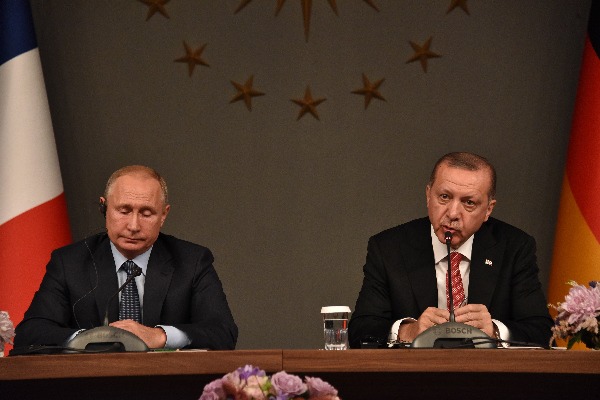 So what was in it for Russia? The war stopped: This is the key achievement. The Turkish army stopped but did not leave Syria. Kurds must leave the Turkish border within 150 hours, the primary demand of Ankara.

After returning home from Sochi, Erdogan said he is ready to resume hostilities if Russia and the United States do not fulfill their obligations.

It turns out that we still have to stay with Erdogan. It is also interesting that President Bashar al-Assad, Russia's main ally in Syria, on the eve of the Erdogan-Putin meeting stated the following: "Erdogan is a thief, he has seized enterprises and oil, he's stealing our land." It doesn't seem like the Syrian president is enjoying the situation at all.

Russian and Turkish military patrols will monitor the withdrawal of Kurdish forces from the border. How many military police do you need for this? Unclear. Where do we deploy them from? If central Syria, it means leaving the frontline exposed.

The Americans did not leave Syria. They just moved closer to the oil fields.

It might be that additional resources will be required. Where should they be based? We have to quickly deploy an entire military force, feed it, and place it somewhere. Will Russia have to expand the military operation? How much will it cost?

But back to the theater of politics. The central message of Moscow, as always, is "we showed these Americans." Oh, but did we? It was the U.S. that reached a peace agreement, and Erdogan stopped the war after a visit by the U.S. Secretary of State and Vice President. It turns out that Russia is merely carrying out the contract. It is not American troops who will now patrol the security zones, but Russian military police. As Trump put it: There is a lot of sand in Syria — let Russia play in it. And actually, the Americans did not leave Syria. They just moved closer to the oil fields. Away from war, closer to money.

Meanwhile, Erdogan defends his borders, creates a security zone and tries to get rid of Syrian refugees. What problems does Russia solve on foreign borders? What is its benefit? In the end, maybe we're just the help America wanted: shoveling Syrian sand for them.

In order to circumvent French and German mediation, the Kremlin is leaking secrets to the press a...

Moscow and Washington are attempting to work out how to communicate with each other after Joe Bid...