U.S. v. Europe: Is The Great Transatlantic Schism About To Happen?

As Donald Trump stares down NATO, we may be witnessing the dying days of the post-War alliance between Europe and the U.S..

PARIS — Historians of the future may write that the 20th century ended on November 8, 2016 with the election of Donald Trump, though we should hesitate before giving such a singular importance to this grotesque and coarse man. Yet contrary to the image often assigned to him, Trump isn't simply a dysfunctional and capricious narcissist — and his presidency isn't just a bad parenthesis that will pass before things return to normal.

Where foreign policy is concerned, the man has a vision he's clearly expressed for decades — that of an America dealing bilaterally and on a purely transactional basis with foreign countries. For him, America must therefore free itself from international norms and multilateral organizations, by playing solely on power-based relations to the detriment of any form of durable alliance. This America is now turning its back on the system of alliances it built 70 years ago, after World War II.

This desire was expressed in a humiliating but clear manner during the recent G7 summit in Canada. The rule of confidentiality inherent to this type of conclave doesn't prevent leaks, and in this case, they describe astonishing scenes and quote extravagant remarks. For instance, Trump tossing two Starburst candies at Angela Merkel and saying, "Here, Angela. Don't say I never give you anything." Or him saying, "NATO is as bad as NAFTA," the free trade agreement between Canada, Mexico and the United States. Or, perhaps most important of all, Trump declaring to a senior official that he has three adversaries: the World Trade Organization (from which the United States could withdraw by an act of Congress), the European Union and NATO.

The U.S. President will tie his trade war against the EU directly to Europe's dependence on the security still provided by the American military. We are entering an unprecedented sequence, going far beyond the deep but non-existential disagreements of the past: the Suez crisis, the Vietnam War, the invasion of Iraq. We are now moving away from the transatlantic alliance toward a more indistinct world with precarious and revocable allegiances.

NATO's summit next week in Brussels and Trump's subsequent bilateral meeting with Russian President Vladimir Putin will be the first steps in what now amounts to a Western schism. The first's multilateral format has everything Trump dislikes, especially as it will take place in the brand new NATO premises that don't comply with the canons of Trumpian architecture. And the bilateral nature of the second, with a Russian president as transactional as Trump himself, will lend itself to all sorts of excesses, on the backs of the Europeans.

Europe will enter its third major crisis in the current decade, adding to the contained but unresolved crisis of the euro and the migration crisis that's been neither controlled nor resolved. Put together, these challenges threaten to undermine the achievements of seven decades of European integration.

In many respects, the situation of the European Union is reminiscent of that of China in the 19th century, unable to unite and form a resistance to dynamic and brutal foreign powers. China of today, instead, is extending a growing influence in the Balkans and Central Europe, to the point of now preventing the European Union from firmly rejecting Beijing's claims in the international waters of the South China Sea.

Russia, for its part, is constantly claiming its rejection of the post-Cold War European order and will mercilessly exploit any sign of weakness. And now, the U.S. is becoming less and less of an ally and more and more mercenary. What's awaiting us in the long run is simply a strategic, economic and social dismemberment.

Some believe they can buy themselves a bilateral insurance policy from Washington.

Under these conditions, Europeans basically have three options: denial, splitting up or rejection. Denial consists in pretending nothing has changed and telling ourselves that the United States will return to the model of the post-War years, that Russia will be held down by its economic weakness and that China will focus most of its energies elsewhere than in Europe. Perhaps ... But, on the international stage, betting on good luck is not an advisable strategy. 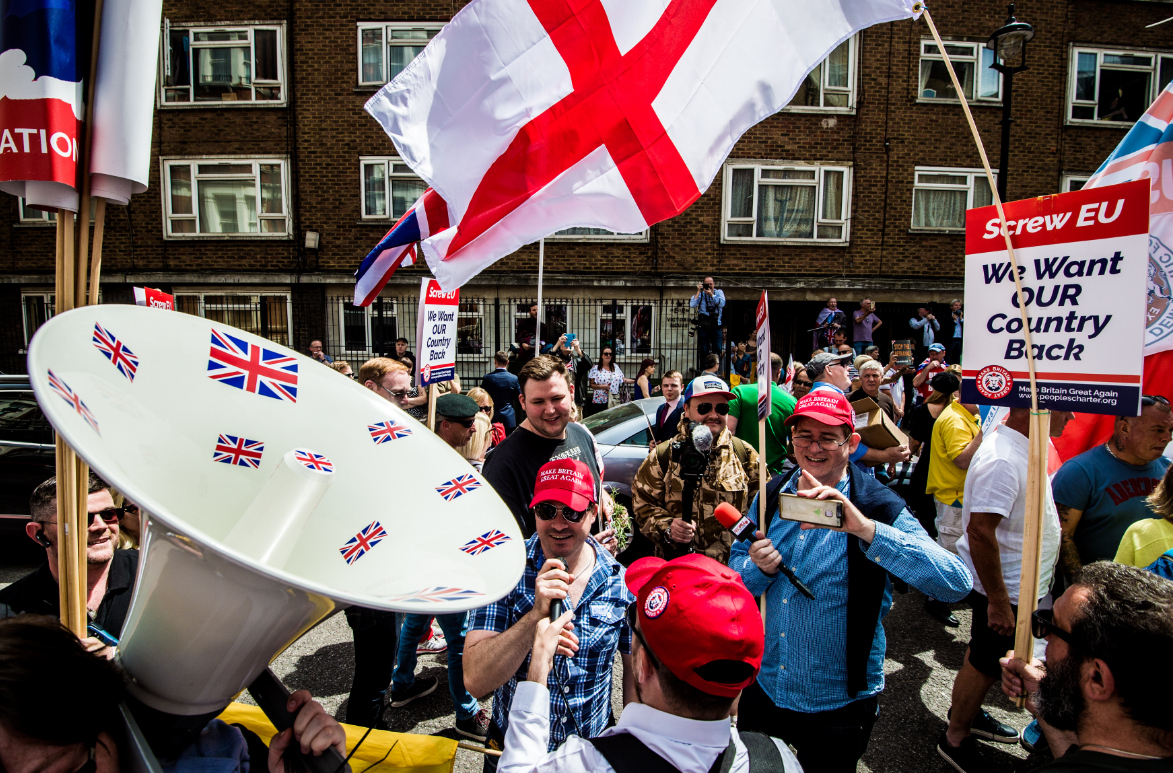 A Brexit supporters during the march to the Parliament in London, UK, on June 2018 — Photo: Brais G. Rouco/SOPA/ZUMA

Splitting up, of which Brexit is a manifestation, is today the strongest trend. Some countries, like Poland, will believe they can buy themselves a bilateral insurance policy with America. Others will give priority to working with a Russia eager to exploit divisions. There are also those who will seek help from China, which has become rich enough to corrupt while remaining far away enough not to have to worry. Many will try all of this at the same time while wanting to preserve their access to the benefits of the Union, in the manner of Viktor Orban's Hungary. But the time will come when it will no longer be possible to have your cake and eat it too, especially once the Brussels pastry shop closes down.

Finally, there is the third scenario: rejection, something akin to the Protestant schism of Martin Luther five centuries ago. If the strategic pope in Washington engages in the trafficking of security indulgences, couldn't a Martin Luther rise to embody an alternative? It should be added that during the Reformation and Counter-Reformation wars, Europe was strategically threatened by the Ottoman push, which reached the gates of Vienna in 1529 and 1683. This would tend to show that it is possible, like Europe at the time, to manage a schism without succumbing to external dangers.

Europe is lacking in neither economic nor military means — the EU remains the world's leading commercial power, and the sum of all military budgets from the European members of NATO is, at around 200 billion euros, three times greater than Russia's expenditure and comparable to China's defense.

The issue remains political. The unity of European political and strategic decision-making processes isn't something that can just be ordained, and the efficiency at the European level of military expenditure can only be built up over time. Under such circumstances, the Chinese curse "may you live in interesting times" begins to look ever more likely.

* François Heisbourg is a special advisor for the Paris-based Foundation for Strategic Research, and chairman of the foundation council of the Geneva Centre for Security Policy