Latin American Elections, A Mirror Of Global Unrest In 2018

A protest against the government on May 13 in Masaya, Nicaragua - Carlos Herrera/DPA/ZUMA

Governments in several Latin American states are facing angry voters who may remove them from power, but perhaps of greater concern is the spreading wrath against all politicians, everywhere.

BUENOS AIRES — Another big crisis has erupted in Latin America. Nicaragua. This erstwhile member of the declining forces of so-called 21st Century Socialism is in fact the other facet of the Venezuelan experience.

The Sandinista government controls the armed forces and police, and it has had a relatively successful run given Nicaragua's size and impoverished state. The regime had forged a firm alliance with the private sector and revamped its Marxism with a mix of zealous Christianity.

And yet, despite a formidable array of legitimating tools, President Daniel Ortega opted for the fierce repression of public protests over corruption in the state pensions fund, causing more than 60 deaths. Initially headed by students, the unrest has swiftly spread to other social sectors.

The "new" middle classes and a youth generation that knows neither the pre-revolutionary Somaza regime nor the first, Ortega-led Sandinista government that replaced it in 1979 and governed until 1990, want democratic qualities authoritarian rulers cannot give them. People are tired of so many years of Sandinista dominance and frightened by prospects of Ortega's wife succeeding him in dynastic style. The logic of legitimacy, dialogue and the quest for common solutions is giving way to the mute logic of violence. 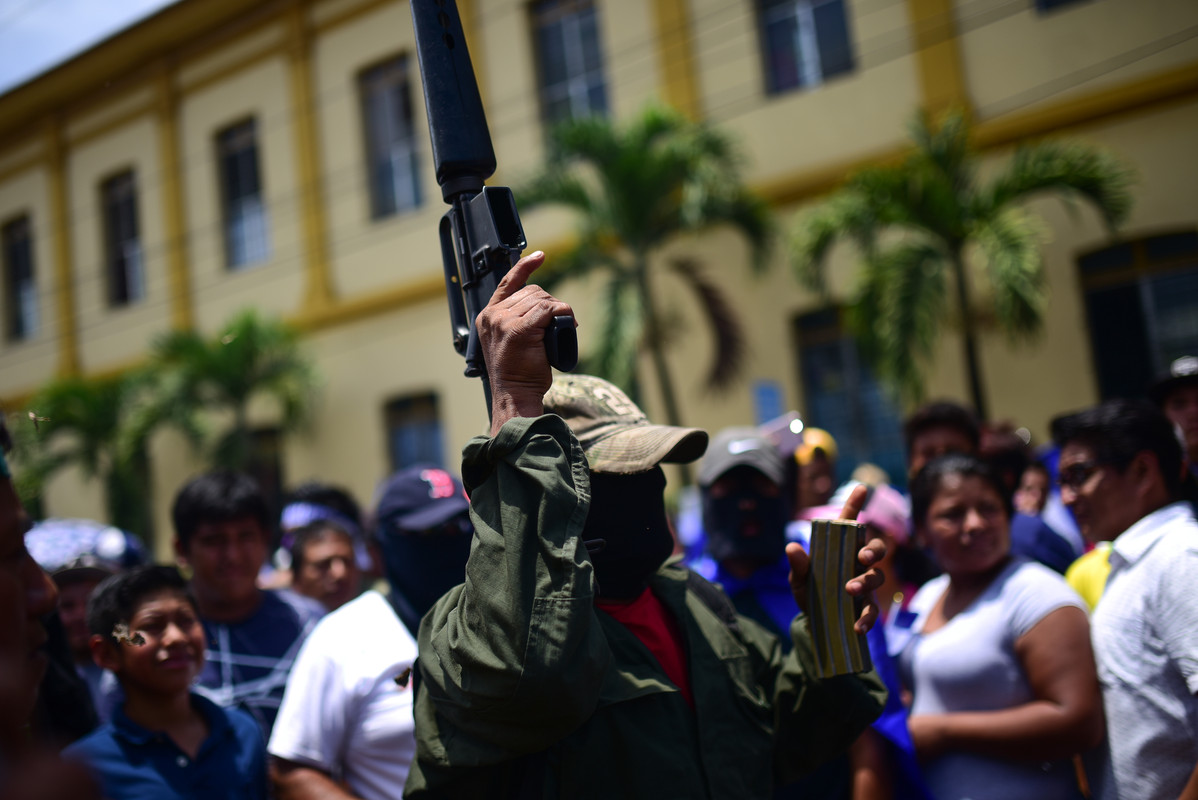 A man holding a gun in a protest against the government on May 13 in Masaya, Nicaragua — Photo: Carlos Herrera

What can explain such an error in political practice? The pride of believing that you alone hold the truth. Since its foundation, the Ortega regime has entertained the messianic notion that circumstantial majorities, even lasting ones, give one the right to skip the rule of law, trample on basic liberties, and negate dialogue with social and political forces.

Sandinism is right now at its weakest since Ortega returned to power in 2007. The regime is suffering from infighting even as it faces a civilian revolt that expresses itself in multiple and disorderly ways but lacks leadership and an organic structure. Shouts of "Ortega Out" can be a catharsis but not a solution.

For now, the Church's presence as mediator in a stalled national roundtable discussion, and assurances from the armed forces that they will not participate in acts of suppression are encouraging signs that gentle good sense may return to the home of such continental emblems as César Sandino and the poet Rubén Darío.

The crisis is unfolding against a background, furthermore, of some very important elections this year in Latin America. Leaving aside the parody in Venezuela, three of the region's four main economies are going to the polls and none of the polls are expected to be good news for ruling parties. The vote is becoming more negative by the day, and feels more like a rejection of the governments in power than support for an alternative program or leadership.

The Macri administration is making political missteps tries to put a wayward economy back on track.

Worse yet, the backlash is targeting the entire political class — opposition groups included — and is now just one step away from challenging the democratic system itself. Indeed, the political novelties of the developed world, where fascist-type or even clownish options are emerging, may be late in reaching Latin America. Inevitably, though, they will show up.

All of this should serve as a warning to the administration of Argentine President Mauricio Macri. Even a government with his margins of legitimacy, earned from victories in two impeccable elections, cannot close itself in and claim its truth as the only one around. Argentina faces a particularly difficult situation, both inherited and self-generated, and this government lacks the critical political mass to face them alone.

The Macri administration is making political missteps tries to put a wayward economy back on track. It needs to engage in dialogue, a real one, not one of those simulated versions convened from time to time once you've forced your interlocutor to adhere to official policies.

This dialogue, which should have been convened when the executive was strongest, must be organic and engage the country's various leading players. Unfortunately, the Macri administration let the postman ring the doorbell twice without answering — which takes us to a second conclusion.

Those who rule must understand that the opposition is just that: opposition. It does not share many of your visions and approaches, and you cannot ask it to share the costs of your decisions — decisions from which it was excluded. One can expect the opposition not to aggravate already difficult circumstances, and to be mindful of the presidential investiture and the wellbeing of state institutions.

The world is a little tired of the Argentines, and a new degradation of democracy would be unfortunate. And in this instance, as it has in the past, silence by itself could cause the degradation. A good starting point, for example, would be to withdraw the parliamentary bill on stand-by loans, which would effectively place the national economy in the hands of IMF bureaucrats.

None should be more dismayed by Daniel Ortega's despotic slide than those who hailed his revoluti...

Police and pro-government paramilitaries have killed more than 200 people — including a 14-mo...