Latin America: When Elections Are A Bogus Tool For Dictators

"Chavez for ever"? - Juan Carlos Hernandez/ZUMA

Calling rulers like Venezuela's Maduro or Nicaragua's Ortega democratically elected leaders is to mock the real meaning of elections — and democracy.

BOGOTÁ — The supposedly progressive, populist Left on the American continent loves to cite would-be free elections to defend those of its cherished leaders still wielding power. I am talking about that gang of three: Daniel Ortega in Nicaragua, Venezuela's Nicolás Maduro and Evo Morales in Bolivia.

The ardent defenders of voting keep saying: These are elected leaders.

Yes, they were, but were they elected in truly free elections, with the freedoms of speech and assembly intact, a neutral state and with independent oversight?

For those three, the answer is no. Nobody can sincerely claim otherwise.

In their day, certain notorious dictators of the hemisphere like Alfredo Stroessner in Paraguay, Cuba's Fulgencio Batista or Venezuela's Marcos Pérez Jiménez, were also elected or took power using, or abusing, constitutional mechanisms made to serve their particular purposes. Many had the habit of calling elections they won with ease. A minister of Nicaragua's 1970s ruler, Anastasio Somoza, once beautifully summed up the simple spirit of these methods. "Vote as you wish and with peace of mind," he told Nicaraguans, "because when it's over, I'm the one counting the votes."

And that is more or less what Ortega, Maduro and Morales have been doing; perhaps behind a more subtle veneer and with the backing of more intellectual, less goonish mercenaries. It is what happened in Brazil with the Workers Party of Presidents Lula and Rousseff, with the Kirchner presidents, husband and wife, in Argentina, with Ecuador's Rafael Correa — though he seems to be out of the game now — and with the late Hugo Chávez in Venezuela.

In the case of Chávez, the departed Bolivarian leader's history is exemplary. Several attempted coups failed before he took power through open elections, backed by forces that wanted to sweep away Venezuela's traditional politicians. Though he was the outsider needed for the task, before long he had pushed his electoral allies out of his way. He began to believe his own rhetoric, while in cash-strapped Cuba, the Castro brothers saw an opportunity they could not miss, adopting and embracing this oil-rich "godson" and admirer.

Chávez thought he was doing great, and he wasn't doing badly, initially. Spending was high, but the country was earning $150 for every barrel of crude back then. He began to restrict press freedoms, shut down media directly or indirectly, and use the state's powers to "win." And yet he still lost a referendum, which he repeated and won on the second try. He would have repeated it as often as necessary no doubt. 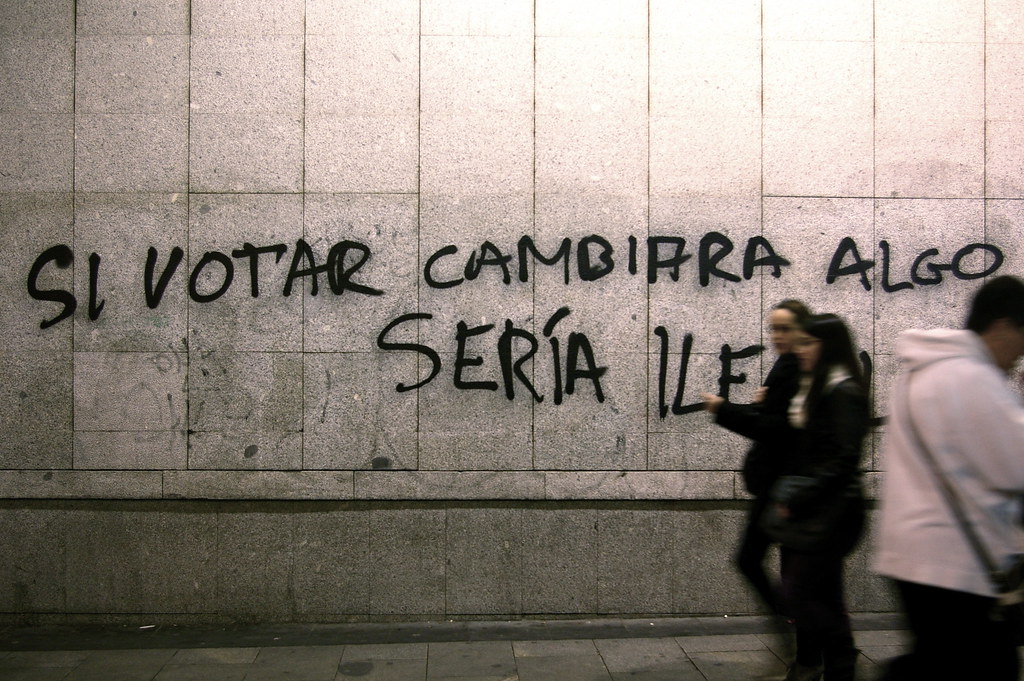 "If voting changed anything, it would be illegal" — Photo: gaelx

The Chávez system was impeccable: He would lose parliamentary elections but still accumulate the seats corresponding to a triumphant opposition. Who advised him on this, one wonders — the Spanish?

Come on! To speak of free, legitimate elections you must have full freedom of expression. People need to be informed, without restrictions before choosing. Without a free press, there is neither democracy nor legitimate elections. What you have are polls that are neither free nor fair nor democratic. Likewise, candidates cannot be restricted nor can you use the state's money and power to back an official candidate. Electoral officials and inspectors must be impartial, autonomous and independent, and no legalistic mechanism can be used to prolong power.

Today, we see the same in Nicaragua, Venezuela and Bolivia, where there is effectively no free press. It is not the same as in Peru, Chile, Colombia, Paraguay or Uruguay, nor even Brazil and Argentina, where the last two presidents lost power precisely because they could not completely muzzle the papers.

Without a free press, there is neither democracy nor legitimate elections.

Most of these partisans of "elections = democracy" have been bitter enemies of the liberal democratic system and have sought power through coups or violence. That is as undeniable as their ability at some point to win power by democratic means.

The great concern, of course, is when they decide, firmly gripping the presidential baton and loyal as ever to their true nature, to destroy democracy from the inside. It is nothing we haven't seen before in the annals of history.

Liberal democracy will outlive and overcome them, and there is no reason to continue to accept the validity of assertions that these are elected leaders. No, because they were fraudulent before, during and after — and remain so.

Like George Bernard Shaw once coyly observed, "Eating a carrot doesn't make you a vegetarian."

More than two years after the opposition leader proclaimed himself the country's "legitimate" lea...