Exclusive - Lula's Letter From Jail: Brazil Needs Me More Than Ever

SAO PAULO — I am a candidate for the Brazilian presidency in October's elections, because I have committed no crime and because I know I can act to put the country back onto the path of democracy and development for our people.

After everything I achieved as president [2003-2010], I am certain that I can restore to government all of its credibility, without which there can be neither economic development nor any defense of national interests. I am a candidate in order to give dignity back to the poor and outcast, guarantee their rights and give them hope of a better life.

Nothing in my life has been easy, but I have learned never to give up. When I first engaged in politics, more than 40 years ago, there were no elections in this country, no rights for trade unions or political organizations.

We confronted the dictatorship and created the Workers' Party (PT), believing in democracy. I lost three presidential elections in Brazil before I was elected in 2002. I proved, with the help of the people, that someone of modest origins could be a good president. I completed my two terms with 87% approval ratings. That is the disapproval rating for the current president [Michel Temer], who was not elected.

I am leading in polls even when judicial persecution has led to my imprisonment.

Over the eight years in which I governed the country, we had the strongest social inclusion in history, and this continued into the presidency of my comrade Dilma Rousseff. I took 36 million people out of extreme misery and allowed 40 million to join the middle class. Our country came to enjoy exceptional international prestige. In 2009, Le Monde designated me "Man of the Year." I received that honor not as an indication of personal merit but in recognition of the progress of Brazilian society.

Seven years after leaving the presidency, and after a defamation campaign launched against myself and my party by Brazil's most powerful press group and sectors of the judiciary, the country is now facing a very different moment: that of democratic setbacks and a prolonged economic crisis. The poorest sectors of the population are suffering from unemployment and falling wages, high living costs and the dismantling of social programs.

Every day more and more Brazilians are rejecting the agenda established against social rights after the parliamentary coup, which has opened the way for a neoliberal program. It is an agenda that electors have rejected four times with their votes.

I am currently on top, by a wide margin, the voter intention polls because Brazilians know the country can do better. I am leading in polls even when judicial persecution has led to my imprisonment.

My house and my children's homes, were ransacked, and my personal accounts and those of the Lula Institute combed through. But they found no evidence against me, and no crime for which I could be blamed. A judge known for his bias has condemned me to 12 years imprisonment for "unspecified acts." He alleges, falsely, that I am the owner of an apartment in which I have never slept, and of which I have had neither ownership, use — nor even the keys. To prevent me from running in the elections and campaigning for my party, they have had to disregard certain paragraphs of the Brazilian Constitution.

But my problems pale in comparison to those suffered by Brazilians. To rob the PT party of power after the 2014 elections, they did not hesitate to sabotage the economy with irresponsible parliamentary decisions, and organize, with media orchestration, a denigration campaign against the government. In December 2014, the jobless rate in Brazil was 4.7% [of the active population]. Today it is 13.1%.

Poverty has increased, hunger is spreading and university gates are once more closing to the children of the working class. Research investments are in free fall. 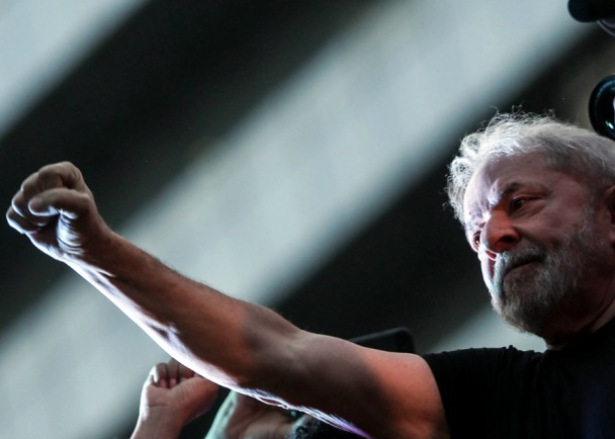 Brazil must reconquer its sovereignty and national interests. Under the PT government, Brazil acted in the international arena to protect the environment and fight against hunger. I was invited to all G8 meetings, and helped articulate G20. I participated in the creation of BRICS gatherings of Brazil, Russia, India, China and South Africa, and in the Union of South American Nations (UNASUR). Today, Brazil has become a foreign-policy pariah. International leaders avoid visiting the country. South America is fragmented, with increasingly serious regional crises and recourse to ever-weaker diplomatic instruments.

Part of the population that backed President Rousseff's downfall after an intensive campaign by affiliates of the Globo media group, which holds a monopoly of communications in the country, has realized that the coup was not against PT. It was against the upward mobility of the poorest in society, and against workers' rights. Against Brazil.

I refuse any accusation of such crimes through a judicial farce.

I have spent 40 years in public life. I began in the trade union movement. I founded a political party with comrades from around the country, and we fought together against the political forces of the 1980s, for a democratic constitution. As a presidential candidate, I promised, struggled for and kept my promise to demand the right for all Brazilians to have three meals a day, so they would not know the hunger I knew as a child.

I have governed one of the world's greatest economies and did not give in to pressures to back the war in Iraq and other military actions. My war was against abject poverty and hunger. I did not submit my country and its natural wealth to foreign interests.

After my terms, I went home to the same apartment I had lived in before becoming president. This was less than a kilometer away from the metalworkers' union in Sao Bernardo do Campo [a suburb of Sao Paulo], where I began my political life.

I have my honor, and I shall never make concessions in the fight to prove my innocence and preserve my political rights. As president, I used all means to wage the fight against corruption, and refuse any accusation of such crimes through a judicial farce.

The October elections, which will bring a new president, a new Congress and new state governors, are an opportunity for Brazil to debate its problems and define its future democratically, by voting, like a civilized nation. But they will only be democratic if all political forces can take part freely and fairly.

I was already president, and my plans did not include running for that office again. But facing the disaster befalling the Brazilian people, my candidacy offers Brazil a way to recover the path of social inclusion, democratic dialogue, national sovereignty and economic growth to build a fairer and more generous country. A country that would once more become a reference around the world, as a defender of peace and cooperation among peoples.

Brazil: What's Fueling The Fires In The Pantanal

SÃO PAULO — One of the world's most important biodiversity regions is experiencing the worst ...