France is the land of seduction, where relations between men and women can seem more harmonious, dating back to the Ancien Régime. Or is that a myth hiding a darker reality?

PARIS — It is an idea one detects amid heated debates after the Harvey Weinstein sex scandal, between the lines written by the #MeToo movement, and perhaps in the back of the minds of all those who have spoken out on sexual harassment: that France is different.

Some suspect it. Others are certain. This country is not like others, they believe, and the gallantry that characterized the aristocratic salons of the 17th and 18th centuries has nurtured here a peculiarly harmonious interaction between the sexes. France's subtler form of feminism, according to this way of thinking, is thus more worthy than its radical, American version. And it has made the Gallic land an oasis of civility where men and women have learned, over centuries, to interact in peace.

In their manifesto on the "Freedom to bother," actress Catherine Deneuve and writer Catherine Millet celebrate this French singularity and defend both a gallantry unrelated to "sexist aggression," and the men so hastily condemned for simply "touching a knee or trying to steal a kiss."

A book written some 20 years ago was the first to give intellectual credence to this idea of French "singularity." In Women's Words (Les Mots des femmes) the historian Mona Ozouf, a French Revolution specialist, argued that France was the land of "pacified" exchanges between men and women. Assuring equal rights for human beings remained "fundamental," she wrote, "but beside it one may highlight lesser differences, those experienced without anxiety or even happily utilized, and play with the resources of seduction and the ambiguity of amorous relations. We could, in other words, explore the infinite range of that which strikes our fancy."

In the salons, women are above all hostesses, and not really recognized as intellectuals.

Ozouf believes this French "singularity" is neither a coincidence nor attributable to a national temperament that somehow became the lot of France. It is the fruit of a long history. She believes the Ancien Régime, the kingdom abolished by the revolution of 1792, bequeathed a culture of mixed company that struck the visiting 18th-century Scottish philosopher David Hume, who noted how men and women mixed on the streets, in workshops and salons. In contrast with British clubs reserved for men, France, he stated, favored the mixed salons that created a space shared by both sexes.

The historian Emmanuelle Retaillaud, author of a recent book exploring the figure of the parisienne, the Parisian woman, confirms that in 17th and 18th century travel literature, "many foreigners were surprised by this aristocratic French tradition that put men and women on an equal footing in conversation." She admits, however, that "it was obviously a form of illusion: In the salons, women are above all hostesses, and not really recognized as intellectuals. But in this interaction of minds that appreciates witty exchanges and nuances, the two sexes can play the game as well as each other. This salon culture gave privileged women of its time a freedom and power that did not exist to the same extent in other countries."

In addition to the court heritage, Ozouf states, the revolution introduced the French Republic's universalist political model. She observes that in the 19th and 20th centuries, France became "an extreme democracy" that put no limits to the "egalitarian idea." She wrote in an article in 2002 for the revue Le Télémaque that "relations between the sexes in France are trusting, happier and more harmonious than in many other European or North American countries. In examining the origins of this interaction of minds in France, I contend that our Republican culture has come to include the Old Regime's values of diversity, courtesy, good manners and sociability."

Ozouf's essay prompted sharp controversy, though the prominent feminist philosopher Elisabeth Badinter came to the author's defense. Writing in the review Le Débat, Badinter defended this idea of a French "exception," a word she had already used in her book XY (Odile Jacob publishers, 1994). 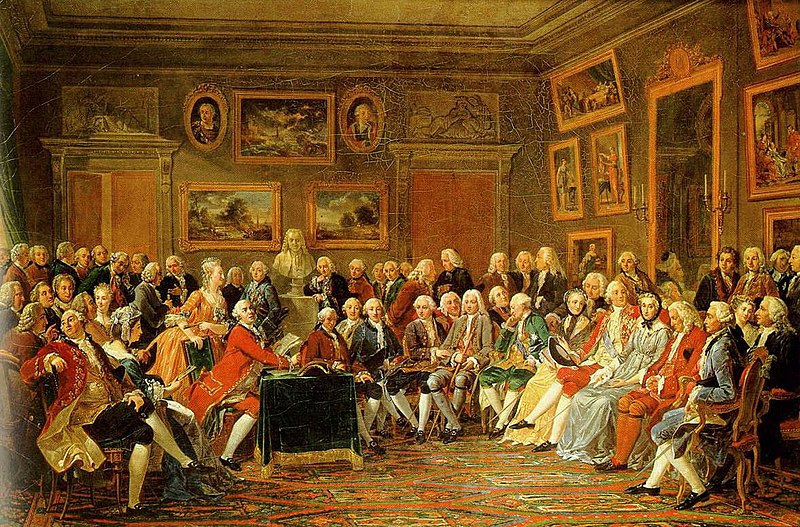 "One may affirm having worked on this history from the 17th century that the relationship between men and women in France is softer, more sympathetic and more imbued with seduction than in other European cultures. Nothing will horrify the French, both men and women, more than a battle of the sexes or their physical separation. One only has to compare the mixed society of our salons both yesterday and today, with the careful segregation of the sexes that has long reigned elsewhere."

For Ozouf and Badinter, the "mixed" approach to gender relations has helped the growth of a particular facet of feminism. While militant feminists in North America will happily pour more oil onto the flaming battle of the sexes, their French counterparts have tended to avoid this "suspect acrimony" toward the opposite sex.

Yet not all female authors share this view. Sylvie Chaperon, joint editor with Christine Bard of the Dictionnaire des féministes, believes that the supposedly civil nature of French feminism is in fact more national myth than a reality. In the 1970s, she states, "France came to know like the United States and United Kingdom, a radical form of feminism very far removed from the courtesy celebrated by Ozouf. As a historian, I would be wary in principle of celebrated national ideas. There are cultural specificities in each country, but the world is global: There is a constant circulation of ideas and lifestyles. The 'civility' of male-female relations in France is a flattering myth that serves a particular brand of nationalism or anti-American outlook."

Chaperon pointed out in fact that French feminism's particular characteristic was not so much its kindness as its weakness. In Britain in the late 19th century the presence of thousands of suffragettes contrasted with the handful of counterparts demanding the vote for French women. These would have to wait for the 1944 Liberation before they could slip a vote into the ballot box, decades after women began voting elsewhere in the West.

The historian Michelle Perrot sees in gallantry a social trick intended to keep women in a servile position. She calls it a "marvelous invention of the Age of Enlightenment, which turns women into mistresses of society salons by refusing them equality in the name of a difference medicine has fixed in their bodies."

Like most historians critical of Ozouf, Perrot stresses that in reality, interactions between men and women — even when urbane — are replete with power relations and domination. Even in its "gestures and discourse, gallantry is a call to order that underlines the man-woman hierarchy," says Juliette Rennes, a sociologist and lecturer at EHESS in Paris, the School of Advanced Studies in the Social Sciences. And if the French tend to overlook this forceful relationship, she states, it is perhaps because they dislike "politicizing" personal affairs.

Gallantry, a social trick intended to keep women in a servile position.

Still, says Rennes, most French feminists have duly forced a recognition of "the political dimension of the domestic space. In reply to their analyses of the unequal division of household chores, one hears fewer people invoking 'the natural order' of things or the 'perfect housewife'." But they have a harder time getting heard when it comes to seduction, she adds, as "people will still cite its charmed, natural and spontaneous aspects to cut short any discussion of its political stakes."

Rennes says the #Metoo movement is tracing a new path here, by showing that every day, seductive relations fall within the inequalities and asymmetries that cross the social realm.

"Many of the testimonies expressed through #metoo have revealed attempts at seduction that women considered far from charming," she says. "That is notably the case at the workplace, where the freedom to engage in, refuse or interrupt acts of would-be seduction depends largely on the status and position of those involved."