Toxic Cities, Expendable Lives: The Waste Crisis In India And Beyond

An umbrella flies out of a man's hand in Mumbai, India. - Ashish Vaishnav/SOPA Images/ZUMA Wire

Unless we question the socio-economic structures associated with the production of waste and waste management, we'll never dig out of the waste crisis.

Over the past few decades, Delhi has been bombarded with objects. These objects, deemed as trash by most inhabitants of the city, become a source of livelihood for many. Present in every nook and corner of the city, and in bulging landfills, these "wasted" objects pose a grave danger to the city's existence, both aesthetically and ecologically.

Quite noticeably, it is as if Delhi's end life sits poised among the three landfills in its three corners. Landfills are ablaze with fires and the toxicity of these materials seeps into the nearby water bodies. The neighboring colonies are inhabited by disposable lives (waste pickers), representing the toxic sinks of the city.

These planned and orderly toxic sites are at once representative of the growing anthropogenic concerns and anxieties and simultaneously reflect the inside-outside binary created through years of cultural constructions around dirt and pollution, specifically in the Indian context, where not just "wasted" objects but also bodies involved in dealing with waste are relegated to dirt and stigma.

It is only when these wasted materials embark upon their post-consumption journeys and are dumped onto the orderly sites of mounting landfills — the city's eyesores — that the toxicity and disorderliness of the afterlife of materials disturb the visual aesthetics of those who reside in the inner spaces of the city.

Even as we live through the visible and ever-increasing waste crisis, we fail to gauge the afterlife of waste. Maybe a few years ago, many of us imagined waste as merely an administrative concern, limiting it to the realm of management. Municipal Corporation of Delhi (MCD) vans would come, pick our waste from nearby dhalaos and dump it at the designated site. For dirt, loosely mapping onto waste has always been construed as "matter out of place." Its right place is always some other space, which is not occupied by "common people."

Yet today, as we become more developed and technologically equipped, the presence of waste (physically and metaphorically) haunts us more than ever before. There is little connection between us and the material we dispose of. Once it reaches inconspicuous locations, such as a landfill, we forget the connection we had with them. There is a deliberate distancing of waste. It is generated by us and hidden somewhere else, in the far-removed peripheral and marginal corners of the city.

Heavy reliance on scientific knowledge and technology-based solutions, followed by landfills as the epitome of technical artefacts and built-infrastructure of cities, has obfuscated the challenges posed by the waste crisis. By construing waste as a matter of techno-managerial concern and that of disposability, we are externalizing its presence. Here, technology is construed as scientifically sound and politically neutral infrastructure, which shall eventually contain the waste crisis in the city.

The recent installations of bio-mining infrastructure across the three landfills (Okhla, Ghazipur and Bhalswa) are projected as grand efforts by the three municipal corporations in Delhi in overhauling the crisis, while simultaneously making the lives of waste workers invisible. While time will tell what future these 'recent' technological advancements hold for Delhi's waste crisis, what is important is to understand the processes that continuously perpetuate the momentous growth of waste in the city.

There is little connection between us and the material we dispose of.

Lending a political and sociological lens will help us unravel the labyrinthine problems of caste, ecology, consumerism and the spatio-temporal axis of the waste crisis. Waste is not just a rejected negative value of our living. It also embodies rather the present-day consumerist lifestyle and the social relations of a capitalist society. As dutiful citizens, we are so obsessed with "rightful" and "orderly" disposal of waste that we fail to gauge the afterlife of waste and the moment of waste constitution.

As waste studies scholar William Viney discusses, waste isn't just matter out of place but also matter out of time. Time is the primary factor in determining what constitutes waste. An object's use value and material condition may not wither off, but its temporality can define whether it is useful anymore. For example, radio cassettes and re-fill pens are common objects available with kabadiwalas (local waste dealers). 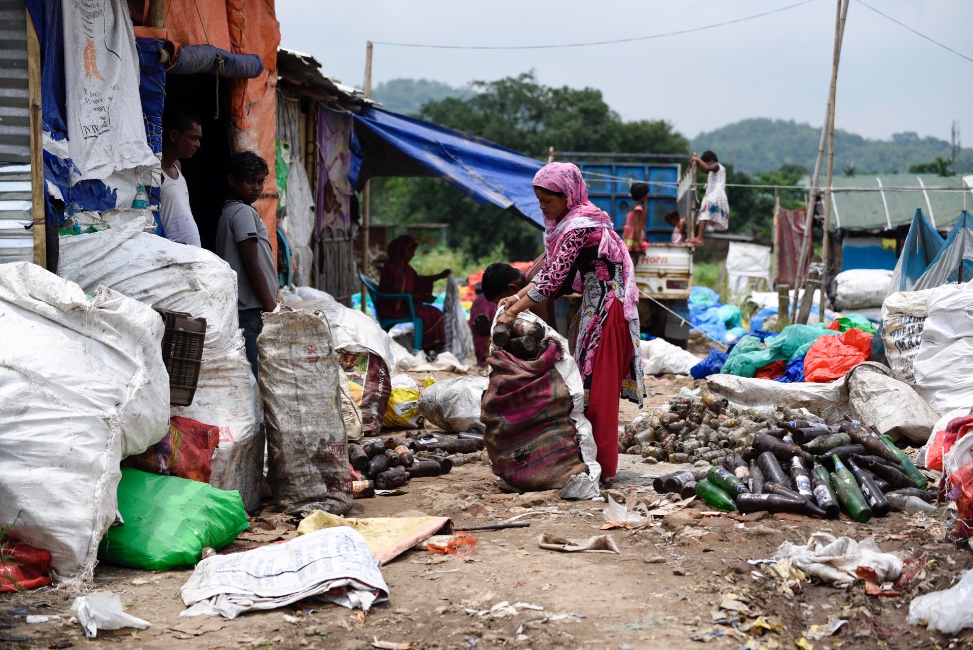 A discarded pair of shoes, tossed in order to make way for new ones, is a common sight around landfills. Ragpickers then wear those shoes to climb said landfill. That wasted shoe acquires use value for ragpickers. As one waste picker told me, "What is kooda for you, is actually kabaad. Do not confuse the two."

Thus, wasted matter — out of place and out of time and pushed toward the margins of the city — is brought back to life by the creative and bricolage efforts of waste pickers, laboring to sustain their lives and renewing the city by injecting all the harm onto their bodies. Similarly, kabadiwalas collect discarded materials on their tricycles from across the city and sell them off to relatively bigger traders, furthering the processes of renewing urban economies and recycling.

But even as waste pickers and kabadiwalas tirelessly and disproportionately bear the burden of capitalism's detritus, they are barely recognized for their laboring-infrastructure. The way waste workers are pushed to the margins of the city and with the burgeoning increase in the dumping of materials, the waste crisis is nowhere near its end. Rather, it is very much endemic to the existence of profit-making economies. Unless a product is marked as "obsolete," "useless" or "out of fashion," there will be no room for new products and subsequent profits.

Moreover, the presence of waste has become such a visceral part of our lives that today it cannot be ignored, even in the "reel" world. The interactions between the non-human (wasted materials) and human world has created an "order of chaos" that is difficult to escape in present times.

The cinematic presence of waste in the movie Joker symbolically maps onto the life of a dejected, exasperated and anxious being in a modern capitalist world, surrounded by trash bags in the fictional Gotham City. This projection of the trash crisis was illustrative of the emptiness of materials and ourselves, where, if deemed 'useless,' humans and materials are pushed to the darkest corners of the cities.

Likewise, the recent Netflix series Leila showcases a state of urban dystopia, where sprawling landfills have become a central part of our lives and the drinking water from taps is black. But if we scratch the surface, we aren't looking at a dystopic future but are living in a toxic reality, where groundwater is highly contaminated, the disposable lives (waste pickers) carrying the burden of consumerist lives are suffering from skin diseases, tuberculosis and asthma.

Yet, the broader public discourse on waste is painted as a practice of discarding the trash in the "right place." It is construed as our duty to not litter the city. The moral governmentality of waste disposal has overpowered the discourse around waste so strongly, that it is even difficult to ponder upon the social and political constellation surrounding the production of waste and the economies of waste disposal.

Both these fictional depictions reveal not just the visible crisis of waste, but also how the continuous processes of interactions between humans and non-humans have altered our habitat along with the existence of our being, which is continuously striving to be more "useful" and "productive" in such abject times.

As much as waste is stereotypically illustrative of disorder and chaos, an analysis of its ontological existence reveals the dark and shameful secrets of human society. As sociologist Zygmunt Bauman famously argued, "Waste is [the] mid-wife of all creations." The irony of our times is that the more developed we are, the more wasted we are. Waste is both the antithesis of development and also a by-product of development.

The present order of living, based on the capitalist model of development, produces by default disorders of waste. Thus, waste as an individual managerial entity doesn't mean anything. It is pertinent to acknowledge and understand the way it gets embedded in our daily lives from the moment we are born.

For example, from the surgical material that's used when we are born to the time we die, the materiality we leave behind constitute waste and are disposed of in some manner or the other. This constitution of waste is defined not just by virtue of a matter and disposability but also by the ecology, space, time, social relations and the afterlife it acquires.

The unequal times we live in force us to oversee the totality of the waste crisis through the smokescreen of development, hierarchical clean spaces and imposition of a particular form of aesthetically built environment. Unless we question these socio-economic structures associated with the production of waste and waste management, we can't really overthrow the waste crisis.

Mitigating waste production is not a matter of behavioral change and the associated moral governmentally around it — for example the Swacch Bharat Abhiyan. Rather, it requires engaging with the hegemonic cultural practices and stigma (of impurity and dirt) associated with waste and waste work. It requires dealing with the profit-led order that demands the continuous production of materials in order to sustain itself and the hierarchical stigmatized spaces and disposable lives which sustain these processes.

Ironically, though not surprisingly, as we struggle to maintain the usual order of living in the time of COVID-19, we have generated a disorder of medical waste, lying across the landfills and streets of Delhi. Waste pickers, who are anyway exposed to the dirt and pollution of humans on a daily basis, are not repulsed and scared by the presence of discarded personal protective equipment (PPE) kits, masks and gloves in the way the middle class is.

Maidul, a waste dealer who is now forced to climb up the landfill due to lack of earning, told me: "Anyways, on a daily basis, we deal with all kinds of waste. There is certainly an increase in medical waste, but prior to COVID-19 also, we saw half-dead animals, syringes and blood around the landfill. We are not surprised and bothered by the current situation. The moment we jump into the waste work, we leave our destiny to god. That is all we have."

Many workers like Maidul, who have literally been reduced to "wasted lives" — unable to sell their collected objects, forced to beg on streets, while also carrying out the work of waste — continue to sustain themselves amidst this chaos, maintaining the order of our cities.

*Aparna Agarwal is a PhD scholar at the University of Oxford. Her research focuses on Politics of Waste in Delhi.