To Kill A River, How Mexico's Santiago Was Polluted Beyond Repair

A family in El Salto in western Mexico is fighting local factories in its bid to show how pollution has "murdered" one of the country's emblematic waterways, the Santiago river.

EL SALTO — When Enrique Enciso was a child, there was just one book at home. He grew up with his mom and siblings in El Salto, an industrial suburb of Guadalajara in western Mexico, founded in the late 19th century by the textile firm, Río Grande. Enciso says the firm "made the homes, brought in people, football, the town's bar, everything." In the yards of people's homes, carp fished from the River Santiago were left hanging in the sun, next to drying clothes that had been washed in the same river.

As a child, when Enciso was not playing or fishing, he read his mother's one encyclopedia volume. In particular, he remembers reading over and over again the entry for Juanacatlán Falls, a natural monument 20 meters high and 167 meters wide, outside his town. "I always remember it saying that for the flow volume, this was the world's seventh most powerful waterfall," he says.

Fifty years later, Enciso leads a tourist circuit ending at the waterfall often dubbed the Mexican Niagara, after exploring every bit of El Salto. "We're Guadalajara's bottom," says Sofía Enciso, 24, Enrique's daughter. The town receives 250 liters of fecal waters a second from the city through Santiago (also referred to by its Spanish name Río Grande de Santiago) and its tributaries, as well as the toxic substances that the 300 companies established nearby pour into the river.

Since 1998, about 5,000 tons of trash sent to Los Laureles, the biggest dump in the state of Jalisco, feeds a stream of leachate, or liquid that leaches from a landfill, which in turn seeps into the Santiago. This occurs at about 24 liters a second, according to Gerardo Bernache, an academic at CIESAS, a research institute in Guadalajara.

By the time visitors reach Juanacatlán, they have seen everything. But even there, they are shocked to see a wall of foam, and their noses are hit with the stench of rotten eggs emanating from over 1,000 pollutants detected in the Santiago river. The landscape there inlcudes a motorway to Guadalajara, which crosses the water, and a parking lot built on what was once the river bed.

It is what the organizers have dubbed the Horror Tour.

"First it was the fish that died. Then the trees. And now, people are dying," says Enciso. "And they are dying by means they didn't choose, you know? The state, keen to move on, has done everything to hide it all."

Enrique is speaking in the sitting room at home in El Salto. Santiago river, which crosses his town, receives Guadalajara's effluents through myriad streams and brooks, though it barely flows past it.

Before 2011, waste water entered El Salto untreated. But after groups like Un Salto de Vida (Leap of Life), which Enciso founded in 2005, the government felt obliged to build a sewerage plant just outside El Salto, which could treat up to 2,250 liters of water a second. 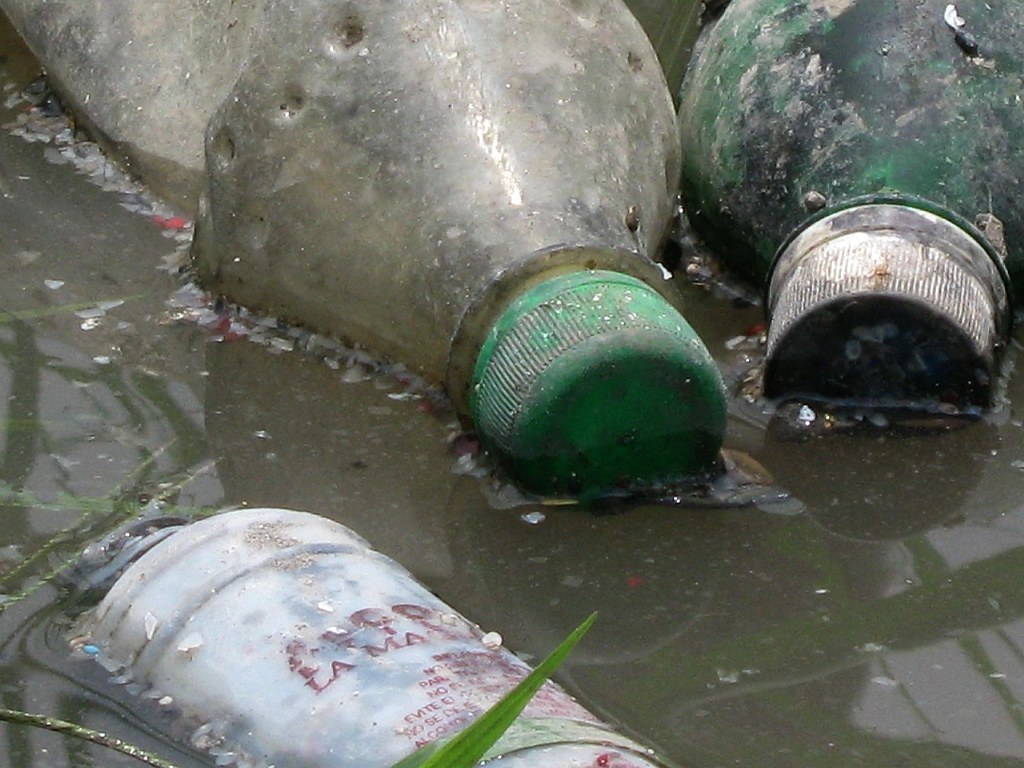 That was not enough. In 2016, a report by Greenpeace Mexico indicated that water coming out of the plant still had 101 semi-volatile organic compounds (SVOC), 56 of which were not regulated in Mexico in spite of being shown to cause cancer, disrupt hormones and harm fetuses and male and female reproductive organs.

These big-money investments only "treat nitrates, nitrites and phosphates, which is the defecation and foam," says Enciso. "Well, their work is aesthetic. When there is little depth, the water can be transparent but it is killer water."

On Jan. 26, 2008, Miguel Ángel López was playing with a ball along the banks of the Santiago in the La Azucena neighborhood. The ball unexpectedly bounced and fell into the river. He waded in after it, and got out as soon as he had grabbed it. That night he kept vomiting, and was taken to a hospital. In the following hours came diarrhea and fever, until he fell into a coma. Nineteen days later, eight-year-old Miguel Angel López was dead. The hospital gave arsenic poisoning as the cause, as levels in his blood were 400% above the legal limit.

Initially the doctors seeing him in the Occidente General Hospital suspected poisoning from some kind of opiate. But as they say here, you can't hide the sun with your finger. The child had been playing around the area where 300 firms discharge, legally and illegally, their residues into the Santiago.

These firms had begun to settle by the river in 1967, when the government established Guadalajara's first industrial park. Mass deaths of fish were first recorded in 1971. What did the state do? Divide and sell off more plots of land to the El Salto industrial park. In the 1980s, 62 industries settled here, with 107 licenses for discharging effluents. At least 200 other firms discharge residues illegally.

The scale of the catastrophe astounds. A study by the Mexican Institute of Water Technology (IMTA) found a total of 1,090 toxic substances, chemical products and metals in the river, coming mainly from nearby industries. UN representatives visiting El Salto in 2016 have described the Santiago river as the "most polluted in Mexico."

This is the reason why the bucket loads of mangos, guavas, prickly pears, lemons and avocados were already a thing of the past when Sofía Enciso, Enrique's daughter, was born. She too played in the river but never saw frogs, turtles and otters that once lived there. Like her father, Sofia went diving with her brothers into the rotting foam that floated past 200 meters from her home.

Sofía would hear her father and uncle speak of the river they knew as children. They mentioned places she knew, but could not understand where this river was, so she asked one day. They told her it was "here, just a few meters away." That, she says, is "when I became conscious of what was happening. Something moves you at that moment and tells you, wow! A river of that size and power — and now it just means death?"

When Enrique, his wife Graciela González, their cousins, friends and neighbors joined to form Un Salto de Vida, they organized marches and walked across the length and breadth of El Salto to identify its worst points. Sofía and her friends listened to older people recall memories that are now being wiped away by the state's indifference.

We'll cut your tongues. You're next.

When Miguel Ángel López died, Un Salto de Vida had already spent three years asking the authorities to do something. They had documents, pictures and files of the pollution around them. In 2008, a young man (whose name the NGO did not reveal), took pictures of streaming leachates at Los Laureles, the dump opened in the late 1990s.

"He was detained and charged with entering the dump without permission," says Sofìa Enciso. "We went with his dad to to check on his state in jail, and they said, 'the judge is coming tomorrow morning at 9.' We went back the next day and they told his father, 'He's not here. He was never detained.' If his dad had not known the state police chief of Jalisco, he would never have come back."

That is when the Horror Tour was created, to bring in outside witnesses who would act as a form of protection. The media, photographers, universities and environmental organizations became interested. Five hundred people visited from UNIVA, Guadalajara's private Catholic university, as did Greenpeace, which has since become a defender of the river.

Local authorities and firms buried some crucial spots, put up fences, blocked paths and employed guards. The Encisos became used to being pointed at or photographed on the street. In one documentary, Silent River, Sofía says "there were people observing us all the time. You sometimes think, if they're following me all the time, I know who they are. It doesn't matter, they're not doing anything."

But the threats that reached their doorstep in late 2012 turned out to be too much. And the calls were frightening. "We'll cut your tongues, you're next," said one caller. One day, the family abandoned its home. They hid for a year and returned on Nov. 17, 2013 under Federal Police protection, although the government removed their police protection in 2016.

Meanwhile, Mexican filmmaker Eugenio Polgovsky won a FICMA environmental film award for his documentary on the family's fight for the river, Resurrection.

It took 40 years to murder the Santiago river, and Enrique doubts if it could ever come back to life. It has, he says, reached a point of no return. When would vegetation or fish like sardines come back, he asks. "All the actions we have taken have merely yielded admirable defeats," he says.

In 2009, Jalisco's state human rights agency issued an extensive set of recommendations to save the river, but as the Mexico City-based Milenio newspaper revealed in 2016, fewer than half were implemented.

For the Enciso family, their struggle will continue because, as Sofìa says, they are "so angry." But also because they know this is an example of what not to do, and their actions, a precedent for the world and "an opportunity to understand" the consequences of runaway industrial production.

Mexico's socialist president is determined to restore a "strong" presidency he believes will put ...

Poll: 29% Of Tourists Choose Mexico City For Its *Beaches