Yulin To Paris: Dog-Eating At Center Of Animal Rights Battle

A Chinese dog meat festival has generated outrage in France. The controversy is a complex dance between animal rights, racism and consumer hypocrisy.

YULIN — It's been four days since Mr. Cracker arrived in Paris, and his program today includes a stroll in the park, a nap and a meditation session on the lawn before a photo shoot later this afternoon in front of the Eiffel Tower.

Mr. Cracker is from China, but he's neither a film star nor a nouveau riche tourist. He's a dog, a seven-year-old Corgi mix who once found himself in a slaughterhouse in Yulin, the southern Chinese town notorious for its dog-meat festival. Mr. Cracker is one of nine dogs rescued from China this summer by the Association Stéphane Lamart, named after its founder, a former policeman.

Emblematic of China's dog-eating tradition, Yulin has come under global scrutiny and has become the scene, in recent years, of intense animal rights disputes. As Stéphane Lamart noted, Yulin is indeed a great propaganda tool for his association. His initiative to travel to Yulin to rescue dogs helped him raise 25,000 euros in just two weeks.

In France, where animal protection laws date back two centuries, dogs and cats were legally recognized in 2015 as living being endowed with sensitivity" and are no longer simply regarded as property. This redefinition is highly symbolic as the vegetarianism and "anti-species discrimination" movements have gradually entered the public eye.

Yulin Dog Meat Festival is the straw that broke the camel's back.

And now a new focus on practices far from French territory. On May 29th, a protest took place near the historic Invalides complex in Paris against the dog-eating festivities thousands of miles away in Yulin. The dozens of people present included those holding puppets with protest signs, as well as protesters dressed up as pink cartoon dogs. The loudspeaker called on passersby to "change ideas" and "eliminate barbarism," and shocking pictures showed bloody scenes of dog slaughter in Yulin's streets — and the various dishes made from dog meat.

At the end of the rally, Stéphane Lamart and Phil Barney, a French singer, each holding a box with a total of 170,115 signatures inside, left the square to go to the Chinese Embassy in Paris located across the river Seine. Lamart ended up mailing the signatures to the embassy, patiently mailing 30 pages each day, until they were all sent out.

"Were it not because of Yulin, the fact that Chinese people eat dogs and cats wouldn't have caused so many concerns. Yulin Dog Meat Festival is the straw that broke the camel's back. It is impossible to be indifferent when you see those cruel pictures," said Stéphane Lamart, who has set up two animal shelters — one for dogs and the other for donkeys — over the last 19 years.

"We may be wrong generalizing about China and thinking that it represents everything — an Asian country that eats dogs," Lamart added. "But ultimately, the purpose is to use this to pressure the country and force it to change." 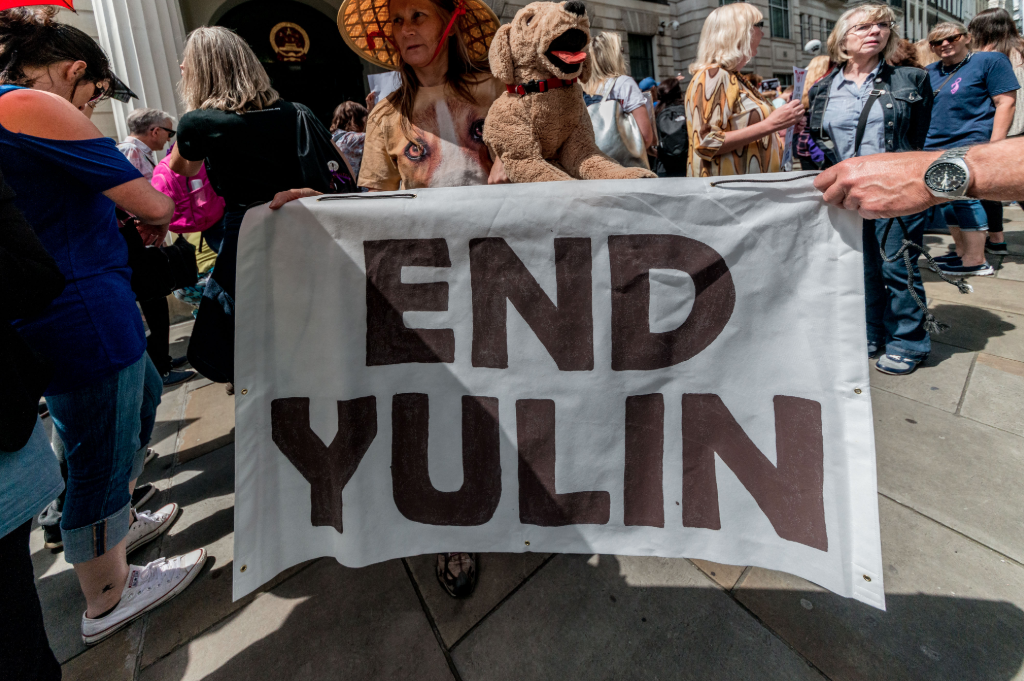 Currently, China only has a wildlife protection law and lacks comprehensive, protective legislation on eating animals kept as pets. As one of the professors currently drafting a new attempt at a animal protection law, Sun Jiang from Northwest University reckons that traditional Chinese culture has no lack of love for living beings, but "modern Chinese society has gone through enormous changes and transformations. Since the concept of protecting animals hasn't become a compulsory regulation, it has led to an absence of ethical living in a contemporary society driven by interests and realistic considerations."

In the face of Lamart's protest, Chinese living in Paris and beyond ask: Why is the finger always pointed at the Chinese?

Westerners do not eat dogs, but they do eat other animals including horses. Are they therefore entitled to criticize the Chinese from a moral perspective? Are they aware that there is also a strong voice in China boycotting Yulin?

After all, it is a minority of Chinese people who have this peculiar appetite. The idea that people are free to eat dogs is not popular at all in China. As a survey conducted in 2016 by China's CCTV showed, 64 % of citizens support the legislation to ban the practice.

It was in 2010 that Yulin's dog-meat butchers initiated the festival. In the beginning the local government supported it because the so-called cultural festival was used as an important vector to promote the local economy. Yet the festival has seen increasing backlash both in China and internationally. In 2015 and 2016, global celebrities, including supermodel Gisele Bündchen, rallied tens of millions of people from all over the world on different social media platforms to petition for an end to the festival.

Why is the finger always pointed at the Chinese?

As Yulin and China have become negatively labeled by the international community, some Chinese people who were originally against the festival have become defensive and paranoid. The question that started as one of appetite has turned into a battle over identity, whether the practice is "barbaric cruelty" or "traditional custom."

The act of bringing back nine dogs from China back to France wasn't as dramatic as one would have imagined. It was William Burkhardt, the 30-year-old founder of the French chapter of Direct Action Everywhere (DxE), an American network of animal rights activists, who went to China this summer along with two other companions.

"What we want French people to understand is that Chinese people may eat dogs and cats, but we eat pork and beef. This is the pot calling the kettle black. If we want them to stop, we should stop eating any meat ourselves," said Burkhardt, who became a vegetarian ten years ago and a vegan six years ago.

Even though his message wasn't exactly the same as that of Stéphane Lamart's Association, it still helped him with a Facebook-based fundraiser for his trip.

Before setting out, Burkhardt planned to take videos of China's dog meat market and slaughterhouses to make the French people reflect on their consumption model. Their unrealistic hope of conducting a "cross-border dog rescue commando raid," faced many technical challenges: Taking any pet out of the country requires immunization procedures, chip identification, three blood tests, etc.

With a language barrier and no familiarity with China, the three youngsters had many doors shut in their faces even though they stayed in the country for ten days. After a lot of effort, they did manage to bring back nine dogs from two dog shelters. Burkhardt was thrilled to adopt Mr. Cracker, while the other eight all found homes within two weeks.

HONG KONG — The Beijing authorities have finally decided to set aside the Hong Kong Special ...

After months of quiet amid the COVID-19 crisis, Hong Kong demonstrators attended an unauthorized ...