The Stakes Of Egyptian Female Soccer Go Beyond The Pitch

CAIRO — Trapped in the ordinary life of waking up early to get on with daily housework or visiting with extended family, a group of young upper Egyptian girls had a simple dream: to play soccer. But they were uncertain whether the traditional society in which they live would allow them to realize their goal.

In 2017, the girls got the chance to challenge their society's norms through the state-sponsored initiative 1,000 Girls: 1,000 Dreams. The project, administered by the Ministry of Youth and Sports and the British Council, aims to train 1,000 girls in soccer centers across eight governorates in Upper Egypt: Beni Suef, Minya, Assiut, Sohag, New Valley, Qena, Aswan, and Luxor.

Minya is an especially useful case study for the soccer program. The area has witnessed a series of economic and political events since 2013 that has eroded the educational and cultural institutions in the area, and social investment initiatives like this one are sorely needed. 1,000 Girls: 1,000 Dreams was first implemented in two Minya villages, al-Birjayah and Deir Mawas, which lie 15 km and 60 km from the center of Minya, respectively.

The girls' persistence and determination keeps them going.

A small team for girls ages 10 to 15 was established in Birjayah, marking the beginning of women's soccer in Upper Egypt. Convincing the players' families to participate was not an easy task — it required an employee from the ministry-affiliated youth centers to follow up with the families on a daily basis to ensure the girls came to practice. The ministry also hired Nashwa Gaber, a former player from the national women's team, to train the girls and gain the parents' trust. 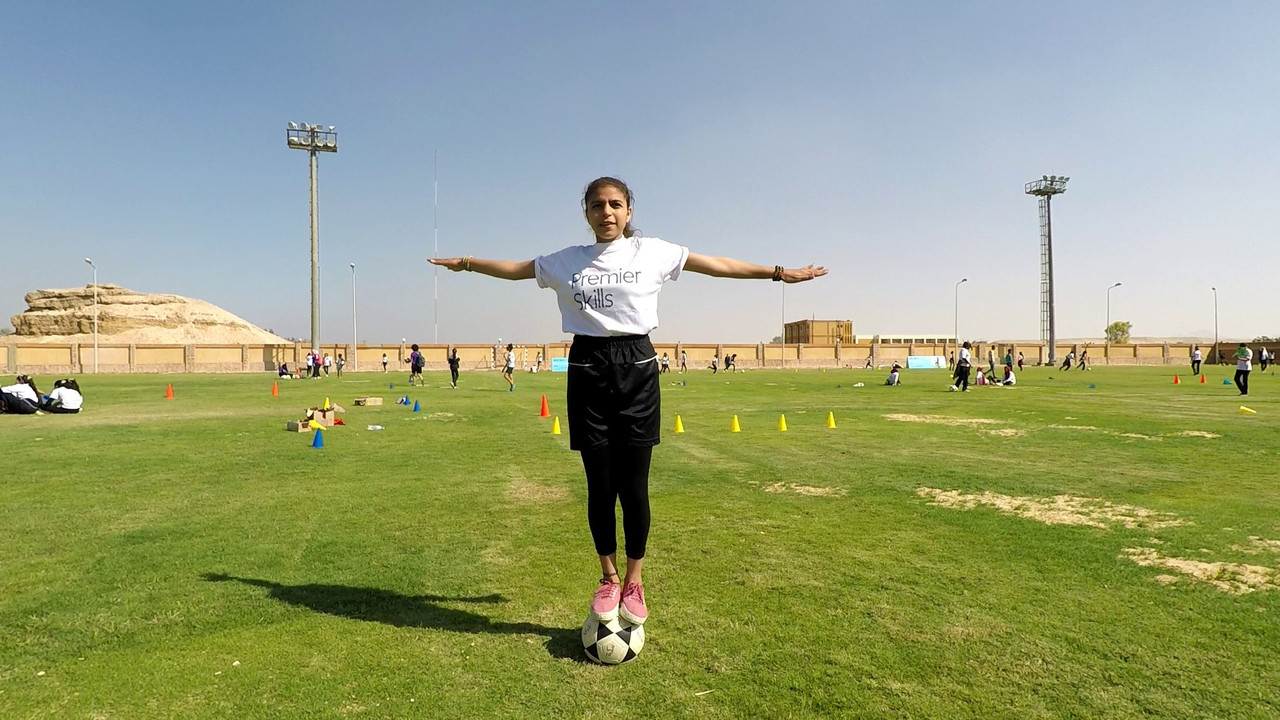 To accommodate the parents' reservations and the village's traditions, and to ensure the girls would attend every practice, the youth center promised not to allow men on the field during practice hours.

"It's shameful for a girl to play a sport, let alone soccer" is an oft-repeated sentiment that reflects the core unease with women's sports in Upper Egypt, a barrier that the Birjayah players have tried to overcome. The girls continue to face harassment on their way to practice, which they cope with by walking together in a group to avoid intimidation.

Nashwa Gaber, the girls' coach, says that the initiative provided the pitch and training equipment for the team, as well as practice balls and pitch dividers. However, Gaber says, the girls continue to lack other basic equipment, including soccer cleats.

That's because the resources allocated to women's soccer in Egypt are virtually nonexistent, Gaber says, especially in Upper Egypt. She fears that the girls won't be allowed to continue playing due to the lack of resources and support. Nevertheless, she argues that the girls' persistence and determination in overcoming these challenges keeps them going.

Her passion for soccer subjected her to harsh criticism and punishment.

Aya Mohamady, a 13-year-old preparatory student at the local school, is the team captain. Three times a week, she wakes up early in the morning, puts on her soccer uniform, and walks three kilometers to the youth center, passing through the streets, alleys, and fields of her village. As captain, she coordinates the team's practice schedule and acts as a liaison between the players and the coach. She also works on raising the girls' morale and intervenes if necessary to persuade parents who won't allow their daughter to come to practice.

Joining a team whose success depends primarily on a spirit of cooperation among its members has enabled Aya to recognize her leadership qualities from a young age.

This opportunity for Aya was made possible because of her father's support and encouragement and has had a critical impact on her life.

Although it was highly unusual in their village for a father to play sports with his daughter, Aya's father used to play soccer with her in front of their house or in a nearby yard when she was small. Aya's father believes his daughter should have the chance to spend her free time as she wishes, including participating in athletics and activities. Aya says playing sports has helped her in many other aspects of life, inspiring her to be a hard worker and to do well in school.

Her passion for soccer led her to play wherever she could, but it also subjected her to harsh criticism and punishment. In school, Aya and her other female friends were forbidden from playing soccer, but her male classmates were not. Whenever any girl tried to participate, a teacher would intervene and stop the game, something that felt oppressive to the girls.

A lot of people don't understand that we go there only to play.

Another player, Tabarak, used to play soccer with her brother and his friends before joining the girls' team. "The only way I could play was if my brother participated," Tabarak says, adding that she had to be a goalkeeper to prevent contact with boys.

A second girls' team was established in Deir Mawas, a conservative village in southern Minya near Assuit. In a society in which men have more rights than women, it was unusual for both the residents and the players in Deir Mawas to accept the idea that women had the whole green pitch to themselves to safely play their favorite sport. But as time passed, everyone gave in to the girls' wishes, and all of a sudden the very people that used to suppress their freedom began cheering them on from outside the pitch.

Nine-year-old Hend, one of the Deir Mawas players, has been playing soccer since she was seven. She is already considered the most famous player in the village. But despite the support she receives from older players, she still faces harassment from people in neighboring villages and cities.

"They think that we mingle with the boys in the youth centers," Hend says. "But we don't mingle with anyone. A lot of people don't understand that we go there only to play," Hend says. "So we invited many people to attend our practices and see for themselves," she explains.

During the 2018 FIFA World Cup in Russia, Hend and her friends organized their own viewing workshops in order to analyze the players' and teams' performances. Since it is often hard for all of them to meet at the same time, they created a WhatsApp group as a place to discuss the games together. "We watch the games and take note of the tactics so that we can use them ourselves and do even better," Hend says.

Hend, Aya, and Tabarak's stories not only illustrate the players' determination but also serve as inspiration for other girls to follow their dreams, whatever they may be.

Families, neighborhoods and even the remains of loved ones are bulldozed over in order to build n...