The Meaning Of Brecht In Modern-Day Mumbai

Arundhati Nag (right) in "Mother Courage and Her Children" - YouTube

The famous playwright who fled Nazi Germany only to be hauled, years later, before the House Committee on Un-American Activities has plenty to contribute still in our post-truth world.

MUMBAI — It's hard to imagine that in our tired, post-ideology, cynical and hopeless world, young directors and theater producers the world over would be so drawn to a German Marxist playwright born exactly 120 years ago. And yet, barely a week goes by without a new Bertolt Brecht (1898-1956) production opening somewhere on the planet. Like Shakespeare, Brecht is a global playwright.

In Mumbai alone, two major Brecht productions have been mounted in the last few months: Courage and Her Children, directed by Quasar Padamsee and starring Arundhati Nag, and The Threepenny Opera, for which Imaad Shah — the son of actor-director Naseeruddin Shah — is making his directorial debut.

Brecht's plays are, of course, superb. They're well crafted, entertaining, complex, hard-hitting. But what makes Brecht particularly relevant to our post-truth world is that in a context of rising intolerance and irrationality, Brecht insists on establishing a rational, scientific attitude between the story on the stage and its viewers, between fiction and reality.

European theater, following Aristotle, was premised upon maintaining the three unities of time, space, and action. Simply put, a single scene has to be set in continuous and chronological time; it has to take place at one location; and it has to have unbroken, continuous action.

The characters on stage seem psychologically and emotionally well rounded and complex. They have a 'motivation' or reason to behave the way they do. Even seemingly illogical actions have a logical basis in the emotional makeup of the character. You feel as if you're watching a slice of life. The play pretends to be real life.

The play, then, is supposed to create for the audience the experience of catharsis — a feeling of increasing emotional saturation, eventually bursting forth in a kind of explosive purification or cleansing. By vicariously experiencing the fate of the hero, especially if it is a tragic fate, the audience is purged of its own emotions.

The Italian communist Antonio Gramsci called this kind of theater something between a digestive and an aphrodisiac, served to bourgeois people who have three hours to kill between dinner and bedtime. 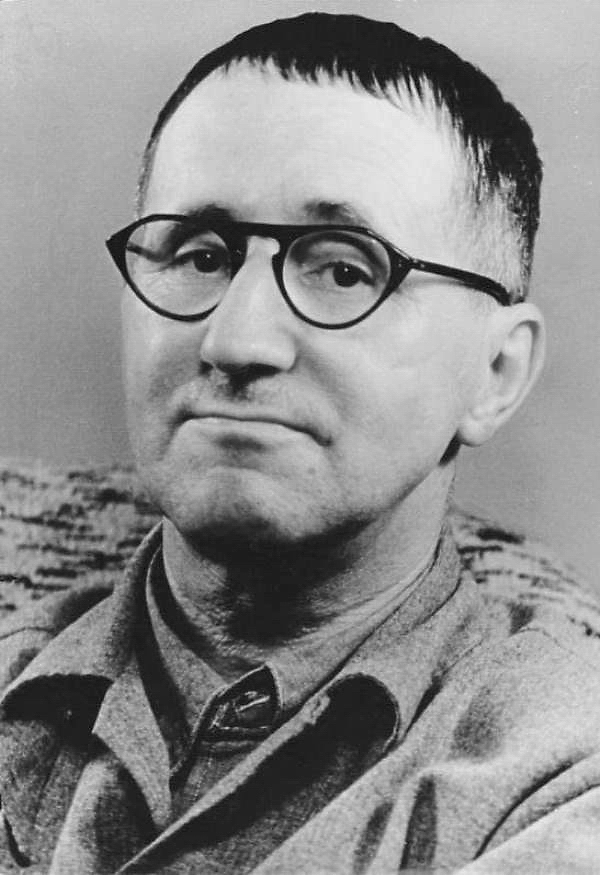 These settled, bourgeois ideas were shattered by the October Revolution of 1917. As masses of peasants, workers and soldiers blew apart what Lenin called the 'weakest link' in the imperialist chain, the world watched with fascination, awe, and delight or terror — depending on the viewpoint of the observer — as the historical drama with global implications unfolded.

It was a time of innovations. In both Russia, where the revolution succeeded, and Germany, where it failed, writers and directors such as Vladimir Mayakovsky, Vsevolod Meyerhold, Erwin Piscator and Brecht, of course, created plays that challenged the bourgeois notions of theater. These were plays that used modern technology extensively, with film projections of real events, recorded radio broadcasts, placards, massive constructivist (and thus 'non-realistic') sets, the entry of cars, horses and even armored vehicles on stage, and 'historical' rather than 'psychological' characters.

On the third anniversary of the October Revolution, in 1920, more than 100,000 people watched a recreation of the storming of the Winter Palace of the erstwhile Tsarist regime, staged by literally hundreds of actors, dancers, circus performers and others, at the very place where the events took place.

More than anybody else, Brecht gave these innovations a theoretical basis. He came to call it 'epic' theater. Deeply inspired by Eastern traditions, this was a theater that strips away its pretense of reality. At all times, it reminds people that what they are watching is only a play. The actors break out into song, or they look through the fourth wall to address audiences directly. Instead of emotional identification, the performer seeks social distancing. The actor doesn't inhabit a character by seeming to become one with it; she distances herself from the character by 'demonstrating' rather than becoming it. This is the famous 'alienation' effect.

For Brecht, theater did only half the work.

The A-effect, as it's known, is perhaps the most misunderstood of all Brechtian strategies. It is often taken to mean that the audiences should feel no emotion, and that they must relate to characters and their actions purely cerebrally. But Brecht didn't mean that at all. He was all for emotions, so long as they didn't lead to a cathartic release. In other words, the audience mustn't exit the theater having vicariously enjoyed the protagonist's story and thereby absolving its of responsibility for taking action in the real world. For Brecht, theater did only half the work. The rest had to be finished by the audience, outside the theater.

For this, Brecht needed a different type of storytelling. In his plays, the story doesn't move in only one direction to inexorable denouement; it takes a zigzag route, sometimes getting caught up in sub-plots, sometimes jumping events.

Think of our great epics, the Ramayana and Mahabharata for instance. The epics keep going off into subplots. Even though they have a small set of central characters, they are teeming with a large cast of very important characters, each of whom has a back story, and who become central characters in their own plots. The narrative jumps forward and back, and often shifts viewpoint from one character to another.

When the epics are played on the stage, in the case of a Ramlila (folk re-enactment of the life of Rama) for instance, everybody in the audience already knows what is going to happen. No one asks, 'What's next?' There is no mystery. What keeps the audience engaged is how events unfold — the artistry of the actors, the shifts in perspective, the emotional resonance, the philosophical stance of that particular telling, and so on.

Indian theatrical traditions break the three unities all the time. Hanuman stands on the stage, looking into the distance, where he uses his divine powers to 'see' Sita imprisoned by Ravan. With one circle of the stage, he announces that he is now in Lanka, at which point Sita walks in and takes her position, seemingly unaware of Hanuman's presence. The unities of time, space and action are broken effortlessly, delighting audiences who know exactly what is to unfold.

Brecht wrote (and directed) plays that were 'epic' in this sense. He frequently announced the main action of the scene before it began, as text on a half-curtain. If the audience already knew what was going to happen, they would have an easier time focusing on why. His was not a theater that said, 'This is reality, fixed and immutable.' Rather, his focus was on getting audiences to be surprised by the commonplace. In other words, rather than blaming Fate or God or Circumstances — often the same thing — and saying 'This is how it is,' Brecht strove to make audiences see that his characters' choices were limited by social, historical and economic conditions, and that these conditions themselves were a product of history. If history makes the present, history can also unmake the future.

Think of what some consider Brecht's greatest play, Mother Courage and Her Children (1939). Set during the Thirty Years' War (1618-1648), it is the story of a woman who runs a canteen for the Swedish army. Since she sells rations to the soldiers, her very existence depends on the continuation of the war. But this very war also consumes, one by one, her three children. It is impossible to take a moralistic position here. You can hardly condemn her, for she, with all her feistiness, manages to make the most of an impossible situation, but you cannot also see her as a 'victim,' complicit as she is in an inhuman system that turns war into a business.

When Hitler rose to power in 1933, Brecht fled Germany. He was right to fear for his life. Too many of his contemporaries were killed by fascists. Poet and playwright Federico Garcia Lorca, also born in 1898, was killed at the beginning of the Spanish Civil War in 1936; the historian Marc Bloch was shot dead by the Gestapo for his role in the French Resistance in 1944; and Brecht's close friend, philosopher Walter Benjamin, committed suicide in 1940 even as he attempted to escape Nazi forces on the Spanish-French border.

Changing countries as frequently as people change shoes (as he put it), Brecht eventually landed in the United States, in 1941. There he produced some of his finest work, famously collaborating with the great British actor Charles Laughton on Life of Galileo. He also sought work in Hollywood, mostly unsuccessfully. The only completed Hollywood film he worked on was Fritz Lang's Hangmen Also Die, which he co-wrote.

In the U.S., the post-War years were marked by intense anti-communism. Brecht also became a target, and was made to appear before the House Committee on Un-American Activities in 1947. His deposition before the Committee almost reads like one of his own plays — he is cunning, clever, ingenious. He plays dumb, pretends he doesn't understand the language, and blames the translation. He escapes without telling an untruth, or giving anything away either.

As writers and artists face more and more hostile governments, right-wing assertion and a general rise in intolerance, Brecht's witty, sly, street-smart cunning is yet another reason to rediscover and celebrate him.

As countries around the world scramble to conduct sufficient COVID-19 testing, there is now an ...

COVID-19 And The Fault Lines of India's Unequal Society

The pandemic and the response to it threaten to exacerbate entrenched economic and social dispari...