Legalizing It In Jamaica: Marijuana Laws Mellow In Land Of Rasta

OLD HARBOUR — Jerry and his brother Steve, both in their thirties, thin and gnarled, are farmers without land. They live in Old Harbour, a dusty village in Saint Catherine Parish, an hour west of the capital Kingston, and rent small plots from area landlords and grow fruits and vegetables that they sell on the markets. They also cultivate ganja, the local name for cannabis.

Ganja growing is a widespread activity in Jamaica for the simple reason that the majority of people here consume the product. And yet, until April, it was strictly prohibited.

Jerry talks about his job with pride, explaining that he's been cultivating cannabis since he was 14 years old. "I give it as a gift to my friends and sell it, it helps me feed my family." It also is essential to his faith as a Rastafarian, with the religion requiring him to smoke during every ceremony.

The field is located outside the village, away from prying eyes, at the end of a forest path: hundreds of plants scattered on the sunny slope of a hill. A little further, in a gully, the two brothers grow more than 5,000 shoots that they will replant elsewhere in a few weeks. For the next harvest, some neighbors with give them a helping hand. They will be paid in kind.

Until then, Steve will stay near the field at all times. He sleeps under the stars and cooks with old tins on a wood fire. "I have no choice," he says. "I have to watch out nonstop to scare off robbers, and sound the alarm if there's a police raid. Last year, local police officers and white Americans burst into a nearby field. They burnt everything and arrested the growers. Some of them are still in prison."

Recently, the two brothers heard it said that their lives were going to change, but they're waiting to see. In April 2015, the government, dominated by the center-left People's National Party, passed a "ganja law" that breaks with the country's repressive past.

But it's a somewhat complicated law. For ordinary citizens, marijuana is partly decriminalized: everyone can cultivate up to five plants at home, store away their harvest and consume it, at home, alone or with their friends and family. Transporting the substance, however, is prohibited: if a person carries around less than two ounces (about 56 grams), they can be fined 500 Jamaican dollars (about $4.50), with no legal consequences. Any more than that, however, is considered trafficking and can result in criminal charges.

The legislation contains another revolutionary innovation: it makes an exception for Rastafarians, who will be allowed to grow and transport their marijuana with no limits on quantity, provided they don't sell it and only consume it in their places of worship. For festivals or concerts, they will have to request temporary authorizations.

The government also wants to favor the creation of an industry of cannabis-based medicinal products (pills, oils, inhalations, creams, nutrients), with the hope of exporting them to places like Canada, Israel or Northern Europe, where their curative virtues are acknowledged. To that effect, it has created a state agency in charge of distributing growing permits to private companies, with a one-acre limit (about 4,000 square meters) per permit.

As of July, there were already many candidates, local and foreign, but the agency hadn't yet begun the selection process. Only local universities obtained permits to carry out pharmacological research. Some investors, nevertheless, are determined to go forward with the idea — no matter what.

On the morning that we meet Jerry and Steve, in the sweltering heat, the brothers receive two visitors from the city. One is the technical director of the Jamaican company Medicanja, which will produce cannabis-based medicine for various illnesses, from epilepsy to glaucoma. The other is a famous businessman, also a politician, who made a fortune in call centers.

Their idea is simple: transform the illegal recreational ganja fields into legal medicinal cannabis fields. The two men expertly examine the plants and immediately start giving advice. The medical marijuana, they point out, will have to be cultivated according to strict norms.

The meeting was organized by Rupert Walters, a social worker in Old Harbour and the head of the brand new association of marijuana cultivators and producers. Walters hopes the industry will first and foremost benefit local producers and not be taken over by foreign companies.

In the afternoon, the two businessmen explain their projects to a second group of growers, in a community hall in the nearby village of Ewarton. The farmers seem interested and claim they are capable of producing large quantities of the crop. But the head of the group, an old, mischievous Rasta displaying a portrait of King Haile Selassie on his chest, is very clear. "We will ask for a collective permit to cultivate medical ganja, but there is no way we will stop producing the ganja we will smoke," he insists. "We will continue our traditional growing on the hills." 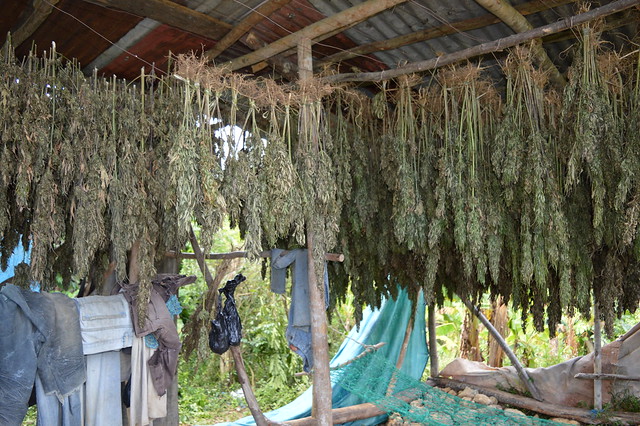 This scenario is repeated all over the country. Dudley is another farmer with no land. He lives in Saint Thomas Parish, to the east of Kingston, and grows sweet potatoes. He is also head right now of a 400-person association for future marijuana growers. To obtain a permit, he got together with an old landowner who currently grows the weed (in his orchard, between bananas and mangos) for smoking but wants to start growing medical marijuana on the hills next to his sugar cane fields.

Other residents from Saint Thomas hope legal pot will attract tourists, which are still rare in this part of the island. A friend of Dudley's, who earns a living by baking almond cakes, plans on also baking "cannabis cookies" — as effective as a joint, but easier on the lungs.

In the countryside, the new law has been welcomed, but not always well understood. Many people have trouble grasping the difference between decriminalization and legalization, or are confused by the imposed limits: five plants, two ounces, one acre, etc. All still fear the police.

"Some police officers can't manage to accept the new situation," Rupert Walters says. "Especially regarding the Rastafarians and the youth in the poor neighborhoods. Before admitting defeat, they could launch brutal actions."

In Kingston, political leaders say these are only transitory problems. On this stormy summer day, Mark Golding, the minister of justice, has invited two artists from the Rastafarian community into his office to discuss the implementation of the "religious legislation."

"This law puts an end to an unjustifiable oppression," the minister says. "It was abnormal to treat Rastafarians like criminals, when ganja is an integral part of popular culture. They will finally become citizens in their own rights."

The ministry will establish a list of the co-housing communities and places of worship where growing and storing will be authorized. The minister also says the new law has already unclogged courthouses and prisons.

"The police used to arrest about 15,000 people per year for possessing, especially young and poor men," Golding says. "That represented between 40% and 50% of all arrests. These men were sent to prison for a year-and-a-half. They then drag around a criminal record their whole lives that prevents them from getting a job or obtaining a visa to travel abroad. This madness has stopped."

National Security Minister Peter Bunting agrees that the new law marks a major turning point. "I have given instructions for the police not to be zealous, to not go out and count the number of plants in gardens or weigh reserves in cupboards," he says. Bunting admits, furthermore, that the fine tickets for transporting less than two ounces haven't even been printed yet. Bureaucratic mistake or a deliberate decision? "Let's just say that printing these tickets isn't a priority for my ministry," he says with a smile.

Bunting sees the 2015 law as a first step toward complete legalization, a goal, he says, that is supported by the majority of Jamaican politicians, on both the right and left. So why settle for half measures? Because it's not entirely up to Jamaica to decide, the national security minister acknowledges. For decades, the U.S. government has urged Caribbean countries not to legalize cannabis and kept an eye on local police forces to make sure they remain mobilized in Washington's war on drugs.

"We are a small, poor and vulnerable country," the minister explains. "We need U.S. aid money and loans. We cannot stand up to them."

That being said, Bunting knows that time is working in Jamaica's favor. Since 2012, five U.S. states have legalized cannabis. Others may soon follow suit. Some people from the United States — pro-cannabis activists, pharmacologists and doctors — have even come to help Jamaicans set up their medicinal industry. On the recreational side, a financial company in Seattle has signed a contract with Bob Marley's estate for the international commercialization of a local variety of marijuana, under the brand "Marley Natural."

In the meantime, Peter Bunting is hoping that loopholes in the law will allow for the development of legal "ganja tourism." The ruse will be about playing on the increasingly blurred boundary between "recreational" and "therapeutic" — the idea being that people in good health can also enjoy the benefits of the plant.

"Upon their arrival at the airport, foreigners will be able to buy, for a few dollars, a permit to consume," he says. "If they are ill or come from a country where cannabis is recognized as medicine, they will have to show a prescription from their doctor. Otherwise, a sworn statement will be enough."

Equipped with their permit, tourists will then be able to go and buy marijuana in special shops, or directly from cultivators like Jerry, Steve and the others. In the minds of many Jamaicans, the real money to be made will come not from medicinal salves or supplements, but from the pockets of U.S. tourists.

The Ital Diet, A Rastafarian Recipe For Eating Right

For a combination of spiritual and political reasons, Rastas developed a diet based on healthy, local ingredients that was a precursor, it turns out, to some current food trends.

Why Jamaicans Are The Sprint Kings: A Scientific and Historical Explanation

The athletic potential of a nation relies on several cultural, social, biological, genetic and environmental factors. These are hard to dissociate and their role only partly explain the current ...