CAIRO — Using sign language, Aya Mohamed, an ambitious secretary in a government-owned institution, explains that she is verbally bullied when she pursues simple daily activities, such as buying something.

Mute and deaf, the 29-year-old has only her lips and hands to use to communicate her needs to a seller, and is often met with scorn and laughter. Mohamed says she faces the same treatment from public employees when she's trying to access social services, like renewing her driver's license or national ID.

"They even gossip about me in front of me, thinking that I won't understand what they're saying because I'm deaf, but I read their lips," she says. "And I'm helpless because this is the norm in my daily life."

Egypt has an estimated 12 million people with disabilities, according to a UNDP report, and they lack legal protection in multiple spheres of life, including education, public accessibility and employment. Egypt dubbed 2018 the "Year of Disabled People," and, in February 2018, President Abdel Fattah al-Sisi's government issued a bill on the rights of persons with disabilities.

A year since passage of the law — which promised key changes in the lives of disabled citizens — disability rights activists claim that nothing has changed.

The law replaces a 1975 law dealing with rehabilitation and employment that set a quota of jobs for people with disabilities at 5 percent for public sector institutions with a staff of 50 or more. Unlike that law, which failed to address other issues (to the extent it was often prejoratively dubbed the "5 percent law,") the new legislation is more comprehensive, covering not only employment, but also health, education, work and political participation.

One of the drafters of the law is Rasha Earnest, a senior official at the National Council for Persons with Disabilities, tells Mada Masr that results should be tangible "soon."

Disability rights activists claim that nothing has changed.

The National Council for Persons with Disabilities's mission is to protect the rights of disabled citizens, promote awareness of disability rights, and direct discrimination complaints to government institutions for timely resolutions. It works hand in hand with the Ministry of Social Solidarity in implementing the law, raising questions about the council's independence, says Mohamed Abu Zekri, a lawyer from the Egyptian Center for Economic and Social Rights who specializes in the rights of persons with disabilities.

The new law mandates the integration of disabled students into all university faculties. Previously, students with disabilities were only admitted to a limited number of faculties depending on the nature of their disability, up to five in total, including literature, business and social services, according to Mahmoud Shalabi, a researcher on education and student issues at the Adalah Center for Rights and Freedoms. Applicants using wheelchairs were limited to programs like pharmacy with strictly theoretical curriculums, he said.

The Ministry of Higher Education is now obliged by the law to facilitate education access for disabled persons, including providing technological services, educational programs, and distance learning opportunities, thus complying with the UN Convention on the Rights of Persons with Disabilities sanction that Egypt ratified in 2008.

However, a different educational scenario is unfolding on the ground. 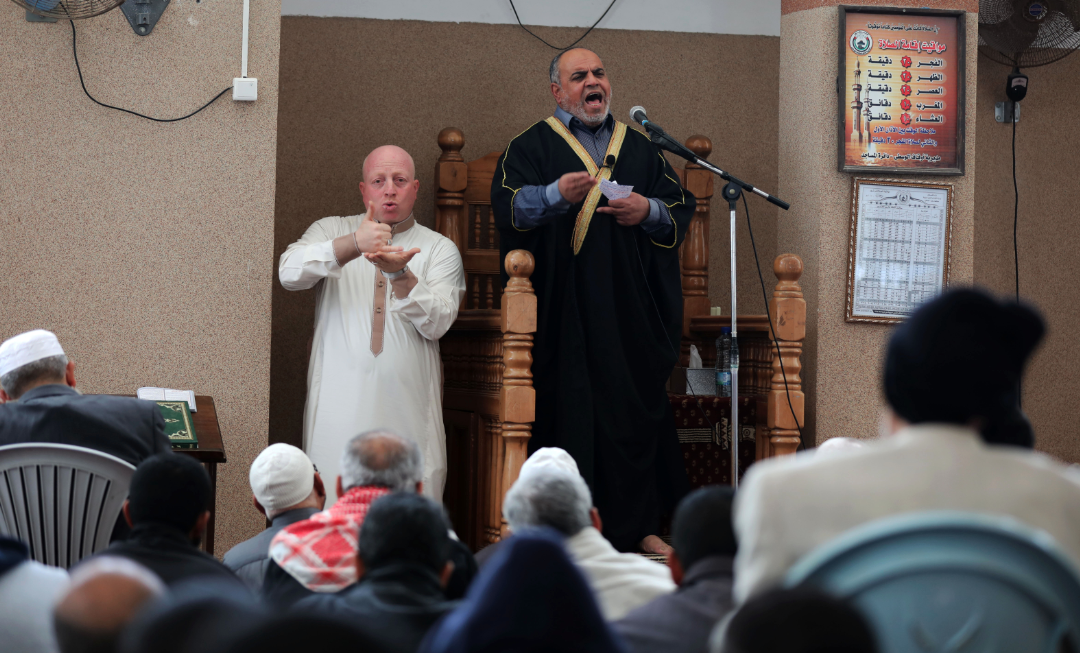 Signing a prayer at a mosque — Photo: Mahmoud Nasser/APA Images/ZUMA

"The laws provided all educational institutions a one-year period, which ended in February, to grant equal educational rights, encourage the integration of disabled students, and provide customized learning facilities; however nothing has changed on ground to this day," Shalabi says.

"We received a complaint at the council recently about a private school that refused to admit a smart four year old only because her mother was blind. In such cases, the school board is penalized and forced to pay a certain amount to protect the mother against exploitation," Earnest says.

Earnest struggled herself in college when she became paralyzed and unable to resume her academic year at Assiut University due to the lack of accessible facilities on campus. The university's board addressed the issue by asking her to study at home and only attend exams, a disappointing arrangement that deprived her from her right to a college life.

"If implemented, the law penalizes faculty members and staff who show moral misconduct towards students. However, this penalty is only effective if complaints are received," says Shalabi.

Regulations regarding university admissions for disabled people are expected to be issued under the bylaws. "An improvement needs to unfold in universities as soon as possible to effectively protect disabled students' right to education. Establishing a unit in every campus that is specialized in facilities, learning new technologies, and an easy admission process is essential," Shalabi says.

While the new law is in theory much broader than the law it replaces, disability activists argue it does not go far enough. People with disabilities will be eligible for a 5 percent discount when purchasing residential units, for instance. But Zekri deems this inadequate.

Awareness about disability rights is essential when putting the law into practice.

The law also offers people with disabilities diversified career options by enrolling them in tailored career training, and for those unable to work, it guarantees a monthly pension.

"We carried out a study at Egyptian Center for Economic and Social Rights assessing the financial status of Egyptians with disabilities, and concluded that 80 percent of them live under the poverty line," says Zekri. "Thus, the rates set by the new law about financial pensions and wages need to be revisited."

Earnest adds that Egypt's view disabled people "as objects that can be moved without consideration and only to be sympathized with sad looks and groans." She adds that awareness about disability rights is essential when putting the law into practice, which will in return help break the practice of families "hiding" their disabled children.

A government engineer, 39-year-old Wael lost both of his arms in an accident in 2005 and has worked to develop his career skills in computer science. After several job rejections, he was lucky to find a supportive employer who valued his skills and helped him grow in the field of computing. He believes that policymakers lack education about disability, including understanding how to develop accessible buildings and roads.

"I am optimistic about the law but I also have to be realistic," Wael says. "Egypt is filled with laws and provisions that were never implemented. I'm concerned that this law will take the same path."