Banksy And The Indestructible Force Of Capitalism

PARIS — I shall spare my readers today a highfalutin reflection on the obsolescence of the French Fifth Republic, evolutions in Romanian culture or the worldwide rise of the extreme Right — thanks to Banksy! The uber-famous but ever elusive London street artist recently returned to the limelight with another of his visual pranks: shredding by remote-control one of his works just as it was auctioned off for a huge sum. It was a public intervention mixing Marcel Duchamp's cheeky urinal with Pierce Brosnan's ruthless elegance in The Thomas Crown Affair, that has again made Banksy the source of planetary surprise, mirth and amusement.

As a reputed critic of consumer culture, Banksy may have sought with his stunt to depict the art market as inane. About a decade ago he caused a stir auctioning off a work of his entitled I Can't Believe You Morons Actually Buy This Shit. Yet in a perverse reverberation of that act, signed prints of the same drawing sell today for considerable sums. Collectors love to be despised this way: It's so chic. Their revenge is to buy out their critics, in a subtle dialectic where the hammer becomes dominant and the rebel artist is relegated to court jester. The art market engulfs its opposites and turns art into business, and moneymaking into an art, following Andy Warhol's enduring recipe. 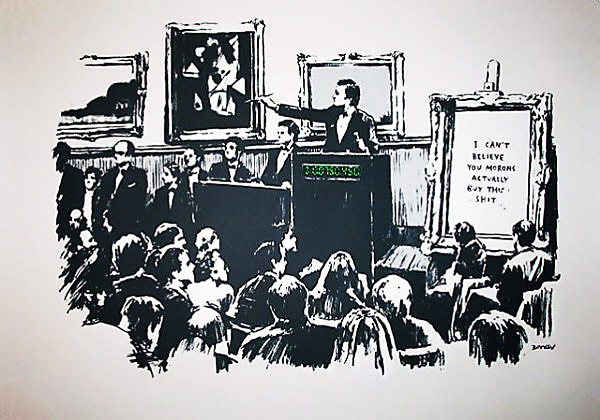 Thus over a weekend last month, the trap Banksy had carefully laid out — which, if a video to be believed, included placing a shredder in his picture's frame way back in 2006 — closed in on its own creator, for the price of that shredded picture is estimated to have already doubled! As the auctioneer's hammer fell, the mechanism was triggered, a siren went off and a room full of opulent buyers raised their phones in collective urgency. Within seconds, a plucky collector (or was it Banksy?) had bought a picture, lost a piece of art and made a big profit. That could be the real meaning of Balloon Girl, the (shredded) picture of a little girl releasing a heart-shaped balloon: Feelings fly away, innocence is worn out and there is no trusting either children or artists.

Banksy's fate reminds me of the hippies who went to live in Auroville in southern India and were forced to reintroduce money; or the Anglican clergy in a Church that has billions of pounds invested in the stock market; anti-fascist protesters protected by state forces; mutual society members who somehow manage to raise funds or anarchists who call the police after a burglary. Capitalism and its legion of personal rights are irresistible.

The reality of doing business has caught up with him.

As the economist Hernando de Soto shows in his work on shantytowns, market principles resurge spontaneously amid the cracks of "alternative" projects. And thank goodness: Who would not prefer an erratic art market fed by reputedly abundant capital funds, to centralized culture policies that favor perks and nepotism? This incident could become a parable on the impossibility of being anti-capitalist. Banksy won fame by playfully spreading a subversive — though ultimately fairly mundane — message against war, profits and those with power.

But the reality of doing business has caught up with him. His firm, Pest Control, is today negotiating its trading and copyrights. His street art or wall graffiti are often cut out by unscrupulous property owners, prompting bitter legal fights between wall owners, local communities and public space attorneys. Likewise the graffiti artist Miss. Tic, whose works in Paris accompanied me for years as I walked to school, is now making copyright claims over her work.

This does not of course negate the presence of a tiny minority of veritable saints, geniuses and aesthetes established on the fringes of our social and economic order. But Banksy is not one of them, or he would have utterly destroyed his picture, and all its economic value. He would have burned or annihilated it. Or he would have stayed in a remote, woodland cabin like the American novelist Henry David Thoreau. He might have quietly disappeared like Tolstoy, who left home to live his final days as a vagabond, lost among the Russian peasantry. The truly rebellious never wind up in the news.